We’ve conducted long ranging discussions on the subject of a possible merger between PMA and United. When the associations confirmed that new talks were being conducted to explore a merger, we ran a substantial piece entitled, An Industry Discussion: Pros And Cons Of A PMA/United Merger, which attempted to analyze the basic issues at stake in these discussions.

Today we will pick up an additional letter, which comes from a United board member. In our initial piece, we identified one of the major obstacles to combining an association based on marketing with one focused on government relations as it relates to international members. We illustrated the point with a photo of Nancy Tucker, Vice President for Global Business Development of PMA. Here is what we wrote: 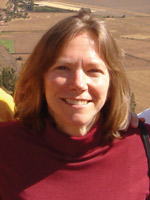 PMA especially has seen its future in tying together the world of produce marketing. And, today, that really is a world. So PMA does seminars in Chile, has an Australia-New Zealand Country Council and sends its Vice President For Global Business Development, Nancy (have-briefcase-will-travel) Tucker to every corner of the globe to woo members for PMA. Yet the dilemma is obvious. Surely there is an inherent friction between having a fully functioning international membership and having a core function that includes lobbying the Federal government of the United States.

Our correspondent thought our readers might draw the conclusion that PMA did international activities and United did not and so sent the following letter in order to correct the record:

There are tremendously different perceptions out there on the issue of the discussions between PMA and United — some based on reality and many based on incorrect facts.

I hope the dialogue you are running in The Pundit can generate a factual basis to inform opinion. It’s probably useful to have thoughtful analysis in the industry based on fact rather than perception or past history.

A good example of the difference between fact and perception would be in the international area. Not many people in the industry know that 10% of United Fresh’s membership is now international, with three non-U.S. Board members.

PMA has done a great job in international circles and everyone thinks the world of Nancy Tucker, PMA’s Vice President for Global Business Development, but the industry needs to begin to recognize that while United will not give up its 100% commitment to shaping U.S. public policy, United is also moving aggressively into international circles.

United co-hosted a conference last fall in London that drew 180 people from 30 countries. In addition, Lorelei DiSogra, United’s Vice President Nutrition and Health, testified a couple months ago before the European Parliament in support of increasing fruits and vegetables in schools.

Jim Gorny and David Gombas — from United’s food safety and scientific team — have long been working on international food safety standards through CODEX, along with other partners.

United has formed a new educational/marketing partnership with Fruit Logistica and will coordinate the educational conference at the Berlin FreshConex event in February, along with meetings of United’s European members.

United had a leadership group tour to Chile this year, not only to learn about this important market but to build ties in that sphere of the produce world. Interestingly, it was a week-long trip to Chile that Tom Stenzel, President and CEO of United, and Reggie Griffin, Vice President of Produce at Kroger, who, at that time, was a United board member, participated in a couple years ago that introduced United to Gustavo Yentzen.

That meeting encouraged Gustavo’s participation the next year as a United Leadership fellow and helped bring the United leadership team back as a group to Chile this year. Gustavo, of course, is now contracted to represent PMA in Chile, but his involvement with the industry includes plenty of contact with United.

In other words, old perceptions about United are probably not accurate. The industry needs, and United has, both a domestic and international agenda — strongly shaping U.S. policy, while reaching out across a global produce world to enhance our industry’s success.

We thank our correspondent for his fact-filled note. We did not mean to imply that United did not have international members, board members or engage in international activities. Indeed, this has never been the case. Twenty years ago, the Pundit was giving speeches at United’s International Trade Seminar.

Indeed the Pundit Poppa, who attended the United convention every year for decades before that, was always of mixed feelings about the event. Dad was an importer and exporter and always thought United did an excessively good job of getting his suppliers and his customers together!

Clearly United does have international activities and members. In fact, the Pundit even has received fan mail for Tom Stenzel from overseas as you can see in this letter here.

Yet all this being true, this does not really answer the question we raised.

David Barney of Bakkavor in the United Kingdom, Robin Poynton of One Harvest in Australia and Alessandro Turatti of Turatti Srl in Italy serve on the United board and, doubtless, they can add perspective and advise on activities and suggest opportunities for United. In that sense they are important and fully contributing board members.

Yet there is a real sense in which their position on the United board — to the extent United is an association dedicated to US government relations representing domestic growers and shippers — is analogous to the role of retailers on United’s board. They are valued, they have things to contribute, but United does not represent them.

In a sense, the only reason United can allow retailers and foreign representatives to have a vote on the board at all is because that vote is ineffectual. There are not enough retailers to change United’s position on PACA and not enough foreign members to make United shift its spending priorities from lobbying Congress.

As we mentioned both here and here, Rob Robson, Chief Executive Officer of One Harvest in Australia is now on the executive committee of PMA. If tradition is followed, Rob will go through the rotation and become Chairman of PMA.

And why not? It is a supply chain and marketing association. It is an international world. There are logistics issues for an association based in Newark, DE, but, substantively, there is no reason someone from outside the U.S. couldn’t be chairman of PMA.

Yet for any association focused on testimony before Congress, lobbying for legislation, etc., it would be problematic at best to entertain the same idea.

We know and like Rob Robson, but, as a non-U.S. citizen, it is probably a bad idea to have him as our lobbying representative before the U.S. Congress.

Which brings us to this point: Our correspondent’s letter points out that it is possible to both have a robust domestic political and policy agenda and engage in international efforts. Point well taken.

But is it desirable? Is it necessary? Is it sustainable? Is there not an inherent conflict in asking foreigners to pay dues to support a U.S. lobbying effort?

Isn’t there a distinction in which a U.S. lobbying association invites foreigners to engage as guests of the association, yet a marketing association can offer a full partnership?

One thing we can all agree on is that knowing the facts is essential for making the correct decision on this matter. So we thank our correspondent for his useful letter.