Here is a letter we received with the accompanying magazine cover from a major force in production-side agriculture in Salinas: 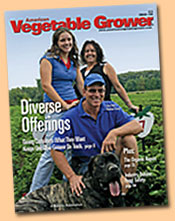 “Duke” is quickly becoming a legend around here in Salinas. Many growers living on ranches have had to get rid of family pets, fence them in, chain them up, yet in Ohio you can pose with them in a middle of a field of your strawberries.

It still hasn’t been proven how the spinach got contaminated in 2006 and, certainly, domestic pets may not be a major issue, in any event, pets are basically banned from ranches in California.

It was always an image that tugged on the heartstrings as one would see growers driving around with their labs (or other appropriate hunting breed) in the backs of their pick ups. Now the dogs stay home all day. One friend told me his dogs are totally depressed.

But not ole Duke here….

Who says we don’t need to take these standards nationwide? Given the editor’s own comments on page 66 and the content of the publication, the cover image is inappropriate.

I don’t want to burst the bubble of the Klco family who seem like very nice people and great farmers, but where are their hair nets? Has their water source been audited 3 times this month? How large is their buffer zone? Do they have lot level traceability?

This publication should be more aware of what’s really going on in terms of food safety and farming.

Rainbow Farms sounds like a wonderful place and the Klco family wonderful people. The history is admirable, and they’ve even put this first generation farm into a Farmland Preservation program.

Yes, it would have been better if the publication was more focused on setting a better food safety example rather than allowing a picture to be published so prominently that it sets a questionable example.

Rainbow Farms seems to sell mostly U-Pick, from a Farmstand or from various Farmer’s Markets. This takes the company pretty much off the grid as far as the produce industry goes.

Perhaps, eventually, we will get to the point where we address food safety risks from this sector of the industry.

Right now, as we discussed in our piece, Food Safety And ‘Locally Grown,’ our bigger concern is commercial buyers who have completely different standard or no standards at all for locally grown produce than they do for their normal suppliers.

Not only is this unfair — it doesn’t make sense. Either these things really help food safety, and so should be uniformly required, or they don’t.

That is why this picture of the happy family and the happy pooch is arousing such resentment in Salinas. It reminds those farmers of a double standard and a country lifestyle now gone forever.