Pundit’s Mailbag – 'Booth Babes', Professionalism and Hypocrisy: What Should PMA’s Policy Be?

Thank you, Jim.  In my opinion, you are on the right side of this issue.

While still others, thinking of firms with prominent female buyers, offer pragmatic thoughts to Ward Thomas of Majestic Produce, who had offered up a defense of “Booth Babes” at conventions:

Other responses were irate, passionate and earnest:

In response to Ward Thomas’ response to the subject of the inappropriateness of ‘Booth Babes’ at professional functions such as PMA’s Fresh Summit, I’d like to ask Ward this:

* Do you have any female co-workers or employees?

* How about a spouse or daughters?

Please ask them what they think and how your response, “I like booth babes! …Sounds like jealousy to me,” makes them feel.

Unless McAllen, Texas, is a bubble from the times of “Mad Men,” I would bet that your opinion and views make them feel uncomfortable.

Women in this industry work hard to uphold a professional image – most of us do not want to resort to “Sexing it up.” We, as do our male counterparts, aim to establish professional relations with all members of this industry (no matter the gender) built on respect and professionalism.

As a human, a woman, and as a female veteran of this industry, I find it mortifying and demeaning when I see women at trade shows hired only to be scantily clad and flirtatious – undoing and undermining before our very eyes much of the effort and hard work that we’ve put into this industry in order to be taken seriously, do business and be treated as equals.

Reading and viewing matter I recommend on this subject include the book, Female Chauvinist Pigs by Ariel Levy, and the documentary film,

I am certain that perpetuating the Objectification of Women is not healthy for any of us, and is not a direction in which our industry should revert.  I am of the opinion that the use of ‘Booth Babes’ only serves to alienate and offend the women of this industry as much as it may entertain some of the men.

I’m happy to see so many women speaking up to voice their objection to this out-dated and sexist practice.

Thank you Perishable Pundit for bringing this important conversation back to the table.

But our correspondent seems to be a man with principles, and he is not afraid to express them. Some would say he is a glutton for punishment! In any case, he sent a follow-up response as well:

You may look at the issue as 3-fold, but everyone sees it the way they see it.

First, I am at the show to meet people face to face that I rarely get to see and hopefully meet some new ones. We all do most of our business over the phone. Who exchanges PO’s at the PMA?

Second, you speak as if the Booth Babes were the only focus. Would the same companies approve of their staff racing little potato trucks around a track, throwing footballs to win prizes, or filling every fishbowl with a business card so they could win free golf clubs or an Ipad?? Distraction or attraction??? Depends on how one looks at it. It’s purely an individual choice. If it is not your cup of tea, then walk on by. Nobody is making you stay and watch.

Third, how do you know that the organizations don’t want these sorts of attractions?? What are we going to do, just go to the show and look at everybody’s signs? Every exhibitor brings to the show what they think will work best for them. It is unfortunate that some women (prudes are usually vocal about it) don’t like the fact that more attractive younger females are getting all the attention but that’s the way it is, no matter how much eye cream they buy. Like you said, when the Italian hunks are showing off at the cooking demonstration, you don’t hear the men complaining about that. 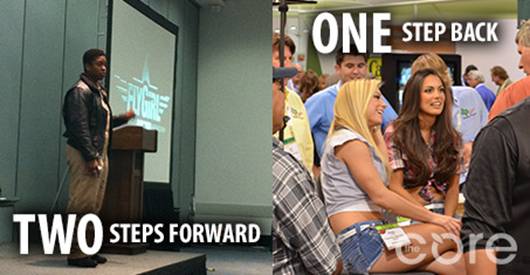 99.9% of straight men are going to say this is labeled backwards!

Thank you for your acknowledgement of my freedom of expression. Look what happens in countries where one cannot do that.

It has been said that being a diplomat requires the ability to say the nastiest things in the nicest way. Should, as expected, Hillary Clinton choose to resign from the State Department, Mr. Thomas probably should not hold his breath waiting for a call from The White House. It is unnecessarily offensive to speak of women being “jealous” or “prudes” or to make caustic remarks about people’s use of cosmetics when one doesn’t even know the people.

Yet, in some ways his letter gets to the core issue: professionalism.

Back in our salad days, when we were green in judgment, we once showed up for work in the office of the family business and the Pundit Poppa sent us home. Why? We weren’t wearing socks and that was unprofessional.

We were taught that reputation was everything.

So when we showed up at PMA in 1985 to launch PRODUCE BUSINESS, we didn’t go around collecting stuff. Nobody had to tell us that we didn’t want to be thought of as the kind of guy who cared about swag.

Over the years, we have tried various activities to make our booth at trade shows stand out, and our experience has been this: The more effective these efforts, the less we achieve at the trade show. In other words, if we just have, as Mr. Thomas alludes to, “a sign” saying what we do, and we give samples of our products, we only get people, well, we only get people interested in our products.

Once we did a little promotion where we placed a credit card type thing in each issue of Pundit sister publication, PRODUCE BUSINESS, and we encouraged people to come to our booth, slide the card through a machine and see which of a plethora of prizes — televisions, golf clubs, paid vacations etc. they could win.

Well the promotion was very effective, if you define effectiveness as attracting lots of people to our booth. It actually hurt business as our staff was so busy dealing with long lines of people who had zero interest in our products that we actually spoke less to those who really did have interest.

On a business basis, we can certainly posit that lots of men in the trade show hall like women and will be interested in engaging with attractive women. Some are single men looking for a “date” — some are married men who are looking for something scandalous, and others are married or committed and just enjoying a little light fun. So having pretty women hanging around will boost booth traffic.

We suppose theoretically one could imagine that a crackerjack team could dive in after the attractive women attracted the men, identify key buyers and prospects and woo them away to discuss the latest in traceability systems or bagged spinach — but we doubt it. After all, the men were attracted by something else… why would they want to leave that to go talk food safety?

So we suspect that the exhibitors who do a lot of stuff other than business need to carefully assess the ROI on their efforts.

We read with heartbreak what Deidre writes: “I find it mortifying and demeaning when I see women at trade shows hired only to be scantily clad and flirtatious — undoing and undermining before our very eyes much of the effort and hard work that we’ve put into this industry in order to be taken seriously, do business and be treated as equals.”

We actually wonder if Deidre is not, maybe, underestimating men! There are plenty of male business executives who are simultaneously capable of saying that Joan is beautiful, but Julie has the brains. They want to be in a business partnership with Julie regardless of what they may have on their minds with Joan.

We doubt that a bunch of Chippendale men giving out salad in a booth next to ours would undermine all the hard work we have put in to get a certain reputation. We would suspect that female executives would note that the Chippendale guys are good looking and athletic and note that the Pundit is, well, whatever they thought of the Pundit before.

We doubt that they would think us less of a Pundit, simply because those guys have six-pack abs. We are not sure why Deidre is so convinced that perception of her as a business executive has anything to do with what some women brought in as eye candy by a modeling agency look like.

In some ways, we see this as less an issue for men than a feminist issue to protect the interests of attractive women. Almost by definition, those women who write to the Pundit are successful executives. And certainly we want to value the skills that make them so successful: Intelligence, verbal facility, tenaciousness, etc.

But what about women who are really good at being flirtatious or at just looking good — is it right for one sister to dismiss the talents and abilities of another? Indeed, is it right for women with a whole different set of skills to try to get the rules of the game changed so those other sisters just can’t compete?

Indeed we wonder if the issue isn’t broader than the “booth babes” — our pieces here on the Pundit have all been focused on temporary staff brought in to wear mock “Daisy Duke” type clothes. But beauty doesn’t just influence temporary hiring. There are companies in the industry known for hiring attractive women as their sales reps. Is that right? Wrong? Does it matter if the sales results of attractive women exceed that of less attractive women?

For us, as a business, the issue is simple. We think for the long haul, and everything we do is about reputational enhancement. So we would never think of doing anything that wouldn’t lead in that direction.

We would encourage companies throughout the industry to think this way.

In this case, what Lorri Koster and Dan’l Mackey Almy are saying is actually in this vein but directed at PMA. They are really trying to make a case about hypocrisy. They are saying that since PMA has become so focused on promoting women in the workplace, hosting the Women’s Fresh Perspective Leadership Breakfast at its annual convention and now launching a new conference specifically directed at women executives, it should focus on its own reputational enhancement and prohibit activities that professional women will find objectionable.

It is a serious argument. We wonder what Lorna Christie, Executive Vice President & COO at PMA, thinks about it. She is very sensitive to branding issues.

Although we think it is good to have someone like Ward Thomas around — someone willing to speak his mind even when he knows many will forcefully disagree — it does seem like the forces of history are running against him. Women are a majority now in colleges and most graduate schools. The definition of professional is changing, and it is perfectly plausible that companies such as Costco and Wal-Mart will one day ban their employees from attending events that don’t meet their standards — and that will lead to a change in event policy.

Whether more professional events will lead to more or less attendance is something yet to be determined.

Many thanks to Lauri Raymond, Gina Nucci, Deirdre Smyrnos and Ward Thomas for helping us think through such an important issue.