Pundit’s Mailbag — A Closer Look At Food Safety Probabilities: Regression Toward The Mean, Gambler’s Fallacy, The Law Of Large Numbers And The Fallacy Of The Calendar

Our piece Chipotle, Bill Marler And Black Swan Events – How Much Money Do we Want To see Spent On Food Safety? brought many notes, including this one:

Excellent article!  Regarding your two comments on probabilities:

“This puts businesses in a very difficult situation. The truth is these are low probability events; they occur unpredictably and therefore Chipotle, or any company, can have five outbreaks this year and then none for 100 years. The numbers are too small to be meaningful.”

“It is very unclear the degree to which any of Chipotle’s efforts will reduce outbreaks of foodborne illness. If this year the company has none, company executives doubtless will proclaim victory and that this proves the efficacy of its efforts. But it might just prove that Lady Luck decided to visit Chipotle in 2016.”

We might refer to this as a “Regression toward the mean”

If one listens to sports commentators speak, one will often hear the expectation for a regression toward the mean — “Joe is overdue for a hit!” In that one word “overdue” is the notion that things all fall into their appropriate level of performance at some point in time.

The Gambler’s Fallacy has this expectation as well: Since the odds of a fair coin being tossed “heads” 20 times in a row are astronomical, then if 19 tosses have turned up “heads,” the way to bet on the 20th is “tails.” But this is not true. The odds of each toss of the coin are exactly 50/50. The universe does not, in fact, keep records to make things even out.

Yet, the Law of Large Numbers is  “A principle of probability and statistics which states that as a sample size grows, its mean will get closer and closer to the average of the whole population.”

So it is important to note that the sportscaster is making a comment based on Joe’s known abilities and expected performance. So he is not saying that anybody who has struck out four times in a row is due for a hit; he is saying that Joe, a professional major league baseball player with a known capacity for hitting, is overdue for a hit. And the gambler is tossing a coin with known and specific odds – 50/50. 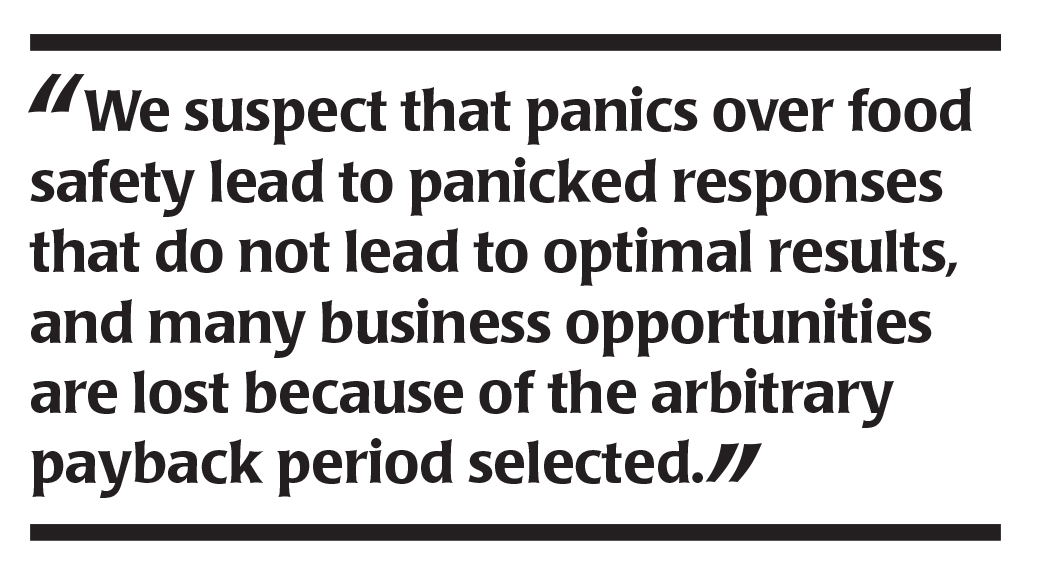 With food safety, the issue is somewhat different. We have no basis to expect food safety outbreaks over any period of time. So to say that one shipper is “overdue” for an outbreak is as silly as saying that one producer is “overdue” for a year without outbreaks. And we have reason to believe that incidents and outbreaks are not wholly random and that efforts we take can bias the outcomes, yet we have precious little knowledge of the degree to which we can bias the outcome.

Still, the issue is that we move to act based on short term results that may mean nothing at all. We quoted Bill Marler, the well known plaintiff’s attorney, as saying that in light of the many food safety outbreaks Chipotle had experienced, there “has to be a lack of controls,” but we have so little data it is impossible to say, for certain, that there was any such thing as a lack of controls.

There is something in the human mind that yearns to find purpose in each event, so if Company A had five outbreaks this year and company B did not, the urge is to find meaning in this, but if the numbers are very small, as the percentage of food borne illness outbreaks compared to food production are, this one-year of statistics tells us little… or nothing.

In business and in life we often fall victim to what we will call the Fallacy of the Calendar. Whether we are looking at food safety incidents or profitability or other aspects of life, we often place great emphasis on how things worked out over a year’s time. But a year is just the time it takes the earth to rotate around the sun, and it is not clear why we should care about outcomes in that period.

We suspect that panics over food safety lead to panicked responses that do not lead to optimal results, and many business opportunities are lost because of the arbitrary payback period selected. Here is an interesting thought: Would Gross Domestic Product (GDP) be higher if taxes were based on five-year cycles? We suspect so.

Many thanks to Dr. Stovicek for walking us down statistical lane.