Here at Pundit headquarters, we get frequent calls now from individual states, commodity-specific groups and others looking to be proactive in the world of food safety. They read about the Buyer-led Food Safety Initiative and about possible Federal Regulation and they know they need to be ahead of the curve.

New Jersey is traditionally one of the most proactive states in these types of initiatives, and we asked Pundit Investigator and Special Projects Editor, Mira Slott, to get some additional information: 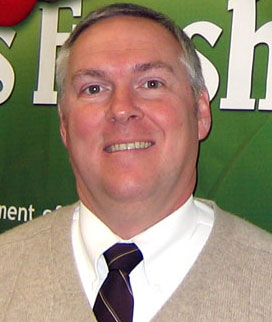 A) and the New Jersey Department of Health and Senior Services last month announced formation of a Produce Safety Task Force “to protect New Jersey consumers and help local producers adapt to anticipated new produce-safety standards in the wake of several recent outbreaks of food-borne illness.” Set to have its first meeting January 23, one central aspect to be examined is how food safety standards could be linked to use of the Jersey Fresh marketing campaign, according to Al Murray, NJDA Director of the Division of Marketing and Development. He elaborates on the mission below:

Q: In addition to yourself, could you list members on the Task Force?

David Sheppart, member of New Jersey State Board of Agriculture

Q: Could you detail the impetus behind the task force?

A: Basically this food safety task force is a concept our Secretary advanced. Just like everyone else, we have been closely monitoring the produce E. coli situation, particularly since early September when the spinach crisis occurred. Here, as the fourth largest spinach producer, we had fields and fields of spinach, beautiful crop, and 10 days before going to market, even though New Jersey wasn’t implicated in any shape or form, the FDA warned consumers not to eat any fresh spinach.

We worked with Senator Lautenberg and Senator Menendez to get the federal ban lifted on New Jersey. When they lifted the ban, we instituted an aggressive marketing plan, including 30-second and 60-second paid radio service announcements, full page ads in local newspapers. We worked with retailers, giving them a CD ROM of an advertisement they could use and signage to promote New Jersey spinach displays.

Q: How effective was your marketing effort?

A: Unfortunately, consumer perception was that anything green was bad. Talking to retailers, there are still many who haven’t recovered from that. It put a real hurt on the industry. The word was out it was California spinach, so we had retailers asking specifically for New Jersey spinach, and we encouraged growers to tag product with Jersey Fresh, our quality grading program. The only way a supplier can use Jersey Fresh is to follow certain standards verified by inspectors.

Q: But the quality grading program doesn’t relate to food safety standards does it?

A: The seeds are placed for adding a component for food safety. It is time to move quality standards to a new level to address consumer concerns of outbreaks with produce products.

Q: How would you do that?

A: We’d like to link food safety to our quality, grading program so that when consumers see the Jersey Fresh logo they know that New Jersey produce is safe. We’ll examine existing food safety protocols on New Jersey farms and see how effective they are. We have a third party auditing program in New Jersey. We were one of the first state government agencies five years ago to be certified to provide third party audits. Most of time, growers would need to go to a private lab. We felt this service was in the farmers’ best interests.

Q: How does the state auditing process work?

A: It works in concert with Rutgers University Cooperative Extension. Dr. Wes Kline provides the training. He’s the check, we’re the balance. Larry Hardwick oversees the department side of the third party audit program. When the farmer is ready to pass, we do the third party audit as it meets USDA requirements. USDA has a website, listing companies that pass the third party audit, which helps alleviate some confusion. Twenty farms in New Jersey are listed from peach growers to blueberry farmers at http://www.ams.usda.gov/fv/fsis/New Jersey.pdf

Q: In the wake of these recent outbreaks, are you looking to upgrade those requirements?

A: We want to examine the current protocols used throughout the produce industry to be sure they are compatible with what will be new coming down. We don’t know what that will be.

Q: How many growers have approval to use the Jersey Fresh logo and how many participate in the state food safety auditing certification program?

A: We have 265 growers in the quality grading program and 19 big players that participate in our New Jersey third party audits. A future scenario would be that in order to use the Jersey Fresh quality grading label, you would need to get the food safety audit.

Q: How will such a program ultimately be financed?

A: That’s a good question. Farming operates on such a thin margin. We want best standards but need to find a way the increased cost doesn’t kill our farmers. Part of this process is researching funding sources and obtaining grants to implement these changes.

Q: So now, in addition to quality attributes, the Jersey Fresh program would also be promoting a form of food safety marketing, i.e., buying produce labeled Jersey Fresh would signal to consumers they are buying safer product?

A: Yes, in a way that’s true. One of the things we feel is that while new standards and protocols may be coming down from the federal government, locally grown has been a huge byproduct of what happened with recent outbreak events. We see linking food safety to Jersey Fresh marketing as an opportunity for our growers. We want to help shape policy.

People are immune to the risks of driving a car. Produce is supposed to be safe and here there’s something called E. coli, but you can’t see it and it creates fear. Here’s the problem. It plays on the psyche of the consumer. The industry has always addressed food safety, but the spinach outbreak has created a whole new landscape of concern for New Jersey.

Q: What progress has the state made so far in alleviating these concerns?

A: Secretary Kuperus saw the need for a spinach roundtable where the buyers, the farmers and members of our department could talk about how New Jersey performed in this crisis, what we did that was good, bad and what we could improve on.

The Secretary also felt the federal government is going to come down with regulations. We need to be in the forefront, proactive rather than reactive. We need to unite people from the health departments, retailers, farmers, the ag extension service, the NJ farm bureau, and start talking about what we can do, a self assessment. We want to be ahead of the curve. Let’s get a plan in place and mitigate the problems. We are one of the first states tackling this food safety issue through such a task force. We could add another 20 people to the task force, but we want to keep it manageable and productive. We have strong representatives on the committee. For example, Produce Auction does $50 million to $60 million in sales.

Q: What action steps have occurred so far?

A: We’re actually having a pre-meeting this week to set agenda for our first meeting on January 23.

It is certainly a wise thing for New Jersey to put together such a task force. In fact every state and every commodity group should be doing the same thing.

One interesting take: if you look at the California proposal and then see what they are talking about in New Jersey, it is clear that one of the consequences of the spinach/E.coli crisis is that the longstanding bugaboo against promoting safety is collapsing. How can it not? Safety costs money and those who spend that money will want a return on it.

So insignias such as Jersey Fresh or the newly proposed mark in California will only be available to those meeting stringent food safety rules. Intrinsically the appeal to consumers will be that “Our product is not only delicious and of good quality but also is safe” — by implication, of course, others will suffer.

But why should the produce industry go to the mat to protect those unwilling to earn the marks?

New Jersey is gaining a first mover advantage by starting the process now. There is some real leadership at work in the Garden State.