By now, after traveling with Danie Kieviet in South Africa, I think you probably should have a completely different opinion of what Sunkist is doing in South Africa and the citrus world in general.

In working with Freshworld, Sunkist’s major strategic partner in South Africa, as well as Goede Citrus in Citrusdal, the Western Cape’s largest citrus packer, Sunkist, via its subsidiary Sunkist Global LLC, will handle or have its brand on 1.8 million cartons of South African citrus in 2006. 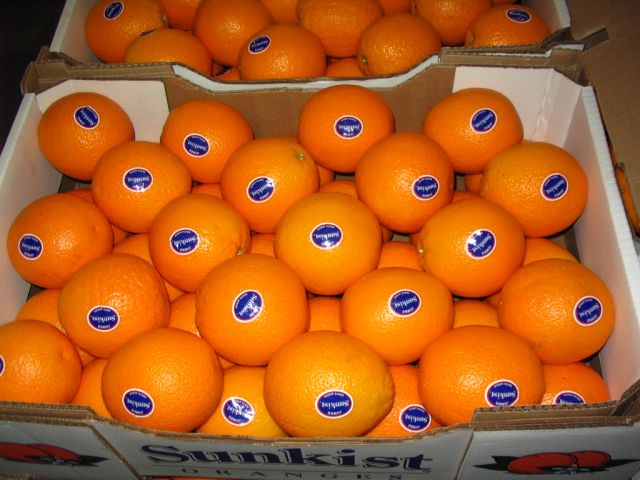 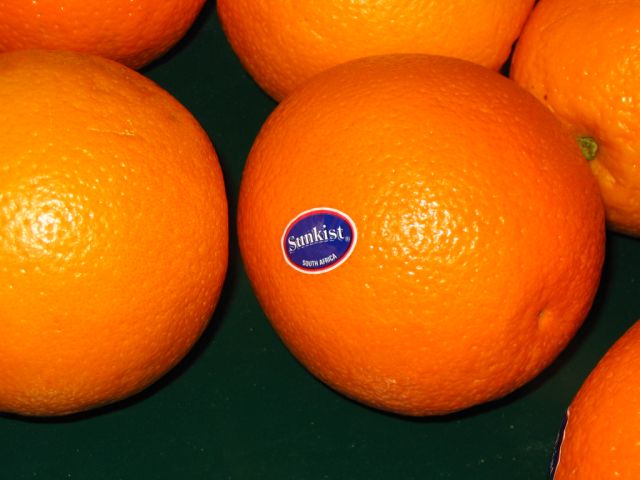 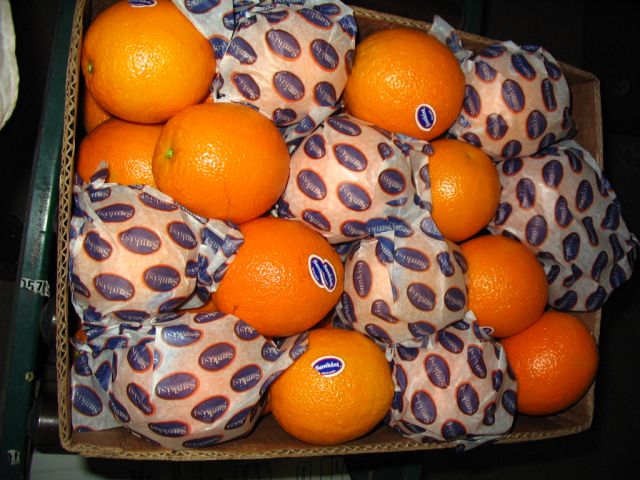 This season, shipments of South African citrus are being made to the US East Coast, Japan, Hong Kong, Indonesia, Malaysia, Singapore, Korea, and to mainland China (via the new RSA to China phyto-sanitary protocol). This past week, 45% of all of the oranges packed in the RSA for the Korean market were in the Sunkist brand.

Sunkist is handling fruit from at least 8 independent high quality citrus suppliers who are committed to the highest quality via Freshworld.

Goede Hoop is packing navels, Clementines, Cara Cara oranges, and Minneolas in the Sunkist brand for the USA. For logistics, Sunkist has even partnered with Fisher-Capespan, an operating division of the RSA’s largest fruit exporter.

Even mother Capespan has recognized the consumer value of the Sunkist brand and has packed perhaps 450,000 boxes of grapefruit, navels and Midknights through a few of their selected packing facilities who are prepared to pack to Sunkist standards and benefit from the recognition that the Sunkist name brings to their fruit — at the consumer level, especially throughout Asia.

All of this has been done starting from “zero” in February of 2004 when Sunkist approved the creation of Sunkist Global LLC.

However, South Africa is not the only country where Sunkist is sourcing citrus.

Starting from scratch in 2004 and working with its partner Mildura Fruit Company in Mildura, Victoria, Sunkist has become the largest handler of Australian oranges into the Canadian market with 65% market share for its Sunkist and SK brands both in bulk displays and through bagging programs with Western Canada’s most important retailers.

Even with severe weather events that affected volumes from Australia, Sunkist has consistently loaded 18-20 containers of Australian navels every vessel sailing into Vancouver.

Mildura is currently packing not only for Canada, but for Korea, Japan and Hong Kong under the Sunkist brand, and the only reason Sunkist decided not to ship fruit to mainland China was because of ‘insufficient supplies’ to do so after covering its other world markets.

Perhaps you have ‘missed’ the Sunkist brand Mexican limes at 3 of New York’s major wholesalers? Sunkist is now supplying Sunkist brand limes 52 weeks a year from Mexico, all packed to its strict but applauded quality and grade standards. Wholesaler (and retail) response has been “finally, someone (Sunkist) is setting a standard for Mexican limes”.

Sunkist is being driven by its worldwide buyers’ demand for “Sunkist branded” year around high quality supplies of all of the important citrus cultivars. With Sunkist’s world buyers it is no longer ‘just about California’.

In California strawberries, Sunkist certainly is well below the horizon compared to the Driscoll’s and Well-Pict’s in terms of “volume”.

However, consumer demand is certainly ‘in the front row’ and Sunkist is looking to expand its cadre of strawberry growers to just begin to ‘scratch the surface’ of the demand there is for the Sunkist brand and quality it is supplying with strawberries.

Perhaps the industry views Sunkist has a ‘slow starter’ in getting into the global citrus supply economy. However, Sunkist has proven to be a long distance runner. It has been running for 113 years already, and it will be interesting for you and I to compare notes 5 years from now.

Please feel free to contact me at Sunkist Global LLC if you want to get up to speed with what Sunkist is doing with new global suppliers to be sure that its worldwide customer base is supplied year around with the most respected citrus brand, period.

Rick Eastes’ response to the Pundit’s discussion of Sunkist’s role in the citrus industry is exactly on target. I have indeed been traveling with Danie Kieviet of Freshworld, who works with Sunkist to build markets throughout Asia for counter-seasonal Sunkist brand citrus from South Africa.

Danie is a human dynamo, and Sunkist found a most aggressive and effective advocate for its interests in this regard. Sunkist also has, as Rick mentions, other important activities in South Africa and other counter-seasonal producers. It is also both true and exciting what Sunkist has done with limes and berries.

I specifically, and by name, complimented the actions of Rick Eastes and of recently retired CEO Jeff Gargiulo in a previous piece in the Pundit.

The issue at hand is not what Sunkist has done the last few years, with which I think intelligent and knowledgeable industry observers, including The Pundit, are in complete agreement. The issue is what direction Sunkist will go in the future?

Sunkist has no greater friend than the Pundit. I focus attention on Sunkist precisely because it is both such an important player and iconic name in the produce industry. When I wrote 15 years ago that Sunkist should do all these things, it was to help Sunkist — to make the growers/owners of Sunkist cognizant of the marketing changes going on in the business. The Pundit cut his eye teeth in the business buying countless Sunkist roller cars that had been sent east without a home plus additional Sunkist fruit for export to Puerto Rico and other markets where Sunkist did not have exclusive agents.

I know that many Sunkist executives, both present and past, as well as many board members, agree that many of the counter-seasonal efforts, as well as efforts to sell other products, could have and should have been commenced many years earlier.

It is no secret that working with a co-op poses special challenges. Unlike a conventional corporation in which the shareholders only need to be persuaded that management is acting to increase the value of a company, in a co-op the owners can, and often do, elect courses of action that they feel may benefit their growing interests — even if the actions hurt the co-op as an entity apart. I do agree with Rick, though, that Sunkist has made incredible progress in a few years and that, long term, the future can be very bright.

Of course, the direction that Sunkist’s soon-to-be-appointed CEO looks to take the organization will be crucial. Now there are three issues at hand, and with Sunkist about to appoint this new CEO, I’ve been harping on these issues because it is crucial that the new CEO be progressive in confronting them:

First, the maintenance of all the great stuff Rick writes about. Unfortunately many of Sunkist’s roughly 4,500 growers are isolated from marketing because, of course, Sunkist does it for them. All too often, the growers perceive the role of Sunkist as being to help them sell California and Arizona citrus. Period.

Even after all the hard-won victories in international marketing that Rick references, I am not convinced that if an up or down vote were held among the growers/owners, they would vote to keep any of it. There are very sharp board members — I consider Steve Barnard one of the shrewdest minds in produce. But it is hard to expose marketing trends to growers who aren’t in the trenches marketing every day.

Second, Rick’s note was very responsive, and I appreciate it. But the silence on China was deafening. It was one thing to persuade Sunkist’s growers/owners to go along with marketing counter-seasonal fruit. This could be justified as both added income and a way to sell more California and Arizona fruit.

The growers/owners could be told something like this: “More and more customers want us to take care of their citrus business 52 weeks a year. If we can’t do so, we will lose direct contact with these key retail customers in favor of other citrus producers. So we will be in a stronger position to sell California and Arizona citrus if we sell counter-seasonal fruit than if we do not.”

Equally when you talk about selling strawberries or limes, this is non-competitive to California and Arizona citrus, but can easily be justified as both picking up additional income and helping to better utilize the Sunkist sales team.

Now the question is different. Are the growers/owners of Sunkist prepared to take the leap into marketing northern hemisphere fruit, particularly from China? This fruit more directly competes with California and Arizona citrus. Yet, I would contend that the strength of the brand requires action here or Sunkist market share in Asia will collapse for northern hemisphere fruit as large plantings start producing.

My solution was to suggest Sunkist take the bull by the horns, build packinghouses in China and seize this rapidly growing production zone as a way to both enhance income and maintain brand presence. Doubtless there are other solutions. But the development of a China strategy will be a crucial job for the next CEO of Sunkist, and that fact should influence who is selected.

Third, beyond the specifics of maintaining current projects and looking at future projects, there are fundamental structural issues that must be addressed. Bottom line is that every Sunkist grower/owner owns two separate assets: production citrus land and shares in Sunkist. I will put my cards right on the table and tell you that those two assets will be more valuable split apart than if kept together.

Sunkist is an incredibly valuable brand. The Sunkist organization is filled with talented people. But here is the fact: If the growers own shares in a company free to build the profits of Sunkist as a corporate entity, without being slowed down by consideration of whether every proposal helps sell more California and Arizona citrus, those shares will be worth a fortune because that organization will move to take advantage of opportunities such as what is starting to happen in China.

My personal guess is when a citrus grower goes to retire in 30 years, those Sunkist shares, listed on the New York Stock Exchange, could easily be worth more than their citrus holdings. But only if Sunkist is viewed as a profit-maximizing entity.

I wish Sunkist and its growers well. And I know that sometimes I may write things that people find disturbing. But I was invited to South Africa because intelligent people in business saw my thoughts regarding the international produce arena as perceptive. Nobody has to do anything because I write an article about it. But by raising these issues to higher visibility, an important industry institution can do a double-check and make sure these issues have been addressed in strategic planning and in the search for a new CEO.

Rick has graciously extended his hand to offer information. And I will fully take him up on it. If he’ll have me, I’ll fly out to Sherman Oaks, talk to some executives, visit some key growers and, perhaps, gain greater insight. Without a doubt, that will be fully incorporated into what, doubtless, will be many future discussions on this vital subject.