PRODUCE AND GENERATION Z
Can We Make Our Pitch Effective In Eight Seconds Or Less?

How to reach the next generation of consumers is a perennial challenge. With food more than most things, habits are set at a youngage, and most people, most of the time, continue to enjoy the foods they grew up with. Sure, young adults who might travel for the first time or start watching cooking programs on television may broaden their wings a bit. But the idea in marketing is that habits are cast young and marketers want to influence the young. It is quite common for a television network to have higher ratings than a different network but get paid a lower rate for its advertisements because it attracts older people, set in their ways, as opposed to younger people, more malleable.

Though this has always been true, there is a sense that the ubiquitous nature of modern technology, where every 12-year-old carries in his or her hands more computing power and is connected to a larger information base than existed in the whole world when their parents were the same age, has changed the rules of the game. Old standards of learning, like memorizing facts, seem somewhat quaint when one can pull up any fact, anywhere, in a micro-second.

The impact of all this on globalization may not be clear for some but, already evident, is that geography matters much less. Many readers are old enough to recall in their youth having a friend leave the neighborhood and the local school. Perhaps for a while they attempted to stay in touch, writing letters, with the occasional expensive phone call which you could only access with parents overhearing. Now, a friend moves away and the texting, snapchatting, tweeting, status and location updates  keep people connected.

There is good in this, of course, but one also knows there is loss. Go to an airport bar and you used to have strangers interacting; now each stares at their own phone and interacts with their established friends and family.

With a new model event such as The Amsterdam Produce Show and Conference, itis natural that we should seek ways to better understand and communicate with younger people. So when we heard that Nic Jooste at Cool Fresh International was doing a study on exactly that subject and had teamed up with a young intern to make it happen, we knew we had a match. We asked Pundit Investigator and Special Projects Editor Mira Slott to find out more:

Nic Jooste, a partner and director of marketing, corporate communications at Cool Fresh International, headquartered in Ridderkerk, The Netherlands, confesses, “I have to compete with Snoop Dogg selling fruit-flavored, chemical energy drinks on YouTube videos.” Jooste, a Baby Boomer in his 50’s, with four sons ages 16, 19, 23, and 24, says Cool Fresh is on a mission to efficaciously connect to and market fresh produce to the “elusive” Generation Z, the cohort following the Millennials, raised in the Internet and social media craze, which he contends has created a global cultural commonality.

Many industry executives focus on capturing young children in their early formative years—and their parents, ideally starting in the womb, to stave bad eating habits before they become irreversibly engrained, an admirable strategy. Jooste points to a successful campaign at Albert Heijn, the largest Dutch supermarket chain, to connect young kids to produce and build the retailer’s brand of social responsibility. As part of a fun, educational promotion, children could get mini vegetable gardens with biodegradable pots with 30 different varieties of seeds to grow their own vegetables. “It was a massive craze,” with children enamored at the chance to become farmers, and parents subsequently all-in with the program, says Jooste, adding, “I won’t pretend to be able to influence grown-ups.” 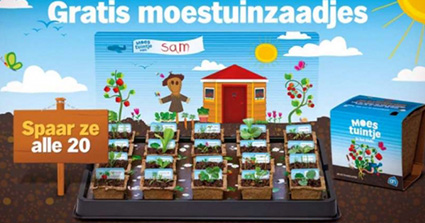 Yet Jooste doesn’t shy away from challenges. “It takes Generation Z’s eight seconds to decide if something is good or bad,” he says, noting, “the attention span of a goldfish is nine seconds,”  referencing an empirical study on web-use, attention span statistics. It shows web surfers averaged an attention span in 2015 of 8.25 seconds, compared to 12 seconds in 2000 (still besting the goldfish), with 25 percent of tech-savvy teenagers forgetting major details of close family and relatives, which Jooste argues is a disconcerting phenomenon.

At the same time, “Generation Z is far more attuned to the plight of world sustainability and creating a better future, in line with Cool Fresh’s founding principles.”

“Our research project looks to understand Generation Z sensibilities and tap into their hearts,” Jooste continues. “Is it possible to tie Generation Z’s concerns and convictions to our company’s strong sustainability vision on a global scale?  The average age of executives at Cool Fresh is 42, and our youngest guy is 28. We need to comprehend how the new generation thinks about things,” says Jooste, noting the impetus for conducting a Gen Z study. First order of business was bringing in graduate intern Mathieu Hirdes, 21, who has worked in the produce industry since he was 15, to set up focus groups and gather data and analyses to uncover the inside scoop on this omnipresent consumer demographic.

“Young people are connected to smart phones 24/7 and know information immediately,” says Hirdes. “Nic (Jooste) described the task at hand to me: ‘There’s a whole new generation we don’t know how to communicate with, but they’re the future consumers,’ Hirdes explains. Delving into how Gen Z thinks by orchestrating surveys and focus groups is not so easy, according to Hirdes. “I need several hundred respondents to make the results statistically valid, but it’s harder to get surveys from younger people. I started with 14- to 19-year-olds, and had to expand the range to 22-year-olds. Attention spans are short,” he says, acknowledging, “I was told by study participants my survey was too long, and no one had the patience to complete it, so I had to shorten it, and drive interest by offering the chance to win a smoothie blender!”

Inquiring into the produce-purchase decisions of study participants, “Ego is still higher than Eco. Gen Z’s won’t just buy a product because it’s sustainable,” Hirdes says, adding, “Focus group participants don’t always understand what sustainability means; the full story of People, Planet and Profit, and optimizing the relationship between those three things. Maybe that will change in the future,” he continues, when strategizing the ways to reach Generation Z.

Everyone says social media is important, but working in generalities could be futile, he emphasizes. “For instance, not all people are on Facebook, but everyone is on Instagram, which is the place to be moving forward.” At least for now in this fast-changing world…

To discover more revelations on how to relate to Gen Z, Jooste and Hirdes will be presenting just-completed results of the first Cool Fresh Generation Z research at the Amsterdam Produce Show.

Of course, it is important to avoid complaining about the younger generation. In a world of rapid technological change, one will see changes in all facets of life. So kids are always going to be different, for they grow up in a different world.

But different doesn’t mean better or worse; that will take us a long time to know, if we ever know it. For the moment, it just means different. The best reminder of that lesson is that classic musical number from Bye Bye Birdie performed by Paul Lynde, Dick Van Dyke, Maureen Stapleton and Janet Leigh and titled “Kids”:

So come on down to the Amsterdam Produce Show and Conference and learn about the interaction between the produce industry and Generation Z. Then join the discussion as we explore how each business and the industry as a whole can use this knowledge to do more business and expand consumption:

You can find a Pundit piece written to introduce the event here.

You can find a brochure right here.

Register for the event, including the Generation Z research seminar, right here.

And let us know if you would like a hotel room here.

And for information on the spouse/companion program, ask here.

And find out about the great regional tours here.

But be a part of this premiere event.