The journalism surrounding this Salmonella Saintpaul outbreak and tomatoes has been horrid. Partly this is because the FDA has been so confusing and irrational.

Initially the warning only applied to people who lived in New Mexico and Texas. Then it applied to everyone. Then it only applied to production from some places, while other places were listed on a website in a constantly changing list. The facts, however, never changed and so there was no reason to ever change the list.

In other words, the implicated tomatoes never came from Hawaii — FDA just basically waited for someone to ask to be cleared before it put them on the cleared list. It is a recipe guaranteed to cause confusion –and that confusion has been reflected in the reporting. 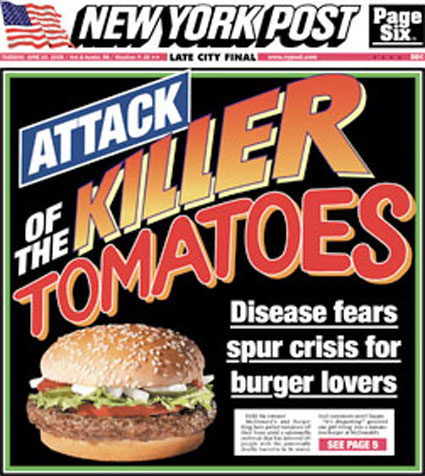 FDA is also at fault for failing to put things in any kind of perspective. The accompanying cover from The New York Post is encouraged by the FDA’s desire to make itself look like a hero saving us all from foodborne illness.

As of the latest update, there are 167 people who are known to have gotten sick from Salmonella Saintpaul, with the same genetic fingerprint as is implicated in this outbreak.

If we assume all of these people did, in fact, get it from tomatoes and that for each known sick person there are 99 unknown people who also were sickened by this outbreak but were not sick enough to require treatment, we wind up with a total of 16,700 people sickened as a result of this outbreak.

Now the CDC tells us that this outbreak has had people reporting an onset of illness starting on April 16 and going to May 27, 2008, or a total of 40 days. It is always possible people ate for a day or two before they got sick but let us, for this thought experiment, assume 40 days of consumption.

USDA Economic Research Service reported that in 2006 per capita tomato consumption was 19.9 pounds of tomatoes per person.

If you do the math, you find out that during this 40-day period, the average American consumed 11.05 servings of fresh tomatoes.

The current US population is about 305 million people. So during this 40-day period, people ate around 3,370,250,000 servings of fresh tomatoes.

In announcing its warnings, if an FDA spokesperson prefaced these warnings by saying, “We calculate that during the last 40 days, Americans have been running a .000005% risk of consuming a serving of tomatoes with sufficient salmonella to cause illness as a result of this outbreak, so we are warning against consumption of…” we doubt we would see many of these New York Post-type headlines. In fact, we are not sure anyone would listen to the FDA and its warnings.

Of course, the FDA can only do so much. Too many reporters are so anxious for a story they avoid the basics of their profession. Just yesterday, like everyone else we started hearing the buzz that the FDA was adding Florida to its “not implicated” list.

In fact, we actually received a press release from the State of Florida telling us that this was true.

Journalism 101, though, teaches that if you edit a newspaper and a guy calls to say that he is getting married, one’s next call is to the woman to confirm she is onboard with the program.

So while lots of journalists — both trade and consumer — were running press releases, we were calling FDA and learning that the release was not quite accurate. We asked Pundit Investigator and Special Projects Editor Mira Slott to clarify:

Q: FDA says it will be adding certain areas of Florida to the list of areas not associated in the outbreak. Yet your release says Florida-grown tomatoes have been deemed safe by the FDA and has been added to the agency’s list of states with “safe to eat” tomatoes. Charles Bronson is quoted saying, “I was confident Florida was not the problem and was not the source of the salmonella outbreak impacting other states.”

There appears to be a discrepancy between your release and FDA’s statement. If only certain areas in Florida have been added to the list, then wouldn’t FDA be saying the outbreak problem could still be linked to Florida?

A: I have been bombarded by calls with questions about the release, so I am writing another one to clarify. The areas under production, which are the ones we’re concerned about because they’re the ones losing money, have now been deemed safe by FDA and have been added to the agency’s list of states with “safe to eat” tomatoes.

These regions are Quincy, Ruskin and Palmetto. These areas are currently under production and harvesting and didn’t even exist when illnesses occurred. After going back and forth with FDA for two days, they finally exempted those areas.

Apparently, they’re still looking at the rest of the state. FDA may still be investigating, that’s their deal. We are confident that all our tomatoes have always been safe from the get go. The areas currently under production are on the safe list.

Frankly, we feel FDA’s handling of this has been disconcerting and cost growers across the U.S. millions of dollars. Growers producing tomatoes today are suffering from FDA’s actions. I’ve had a lot of retailers and food service operators calling me and I’ve said over and over that Florida tomatoes are safe and not part of the problem.

Others in the industry discussed the matter with FDA and found out this:

The press release from the Florida Agriculture and Consumer Services stating that Florida has been added to the “safe to eat” list of states is not completely accurate. Florida and FDA have been working on an agreement that will allow individual counties within Florida to be added to the list, and it will apply to tomatoes harvested after May 1.

At this time, we have been told there are 19 counties in Florida that will be added to the FDA list. To verify that shipments of Florida tomatoes are from these counties and harvested after May 1, the tomatoes will be shipped with a certificate. The certificates will be included with the invoice. If a shipment is split, the certificates can be copied so that they will accompany the tomatoes as part of the records.

We asked what can be done with the Florida tomatoes that are now being held at stores, in distribution centers, etc. We were advised that you should check back through the distribution channel to verify if the tomatoes came from one of the 19 counties on the list and if so, you will be able to receive a certificate for the tomatoes that meet the criteria.

FDA will post the names of the Florida counties sometime this evening. Information on the certificates will be available through the state of Florida.

FDA could not give us any specific information on if, or when, the entire state of Florida would be added to the list. The CDC and FDA are continuing the investigation.

We have learned, though, that intentions and actions aren’t the same, so we waited till 12:25AM Eastern time, at which time FDA actually posted the new information. Then we sat down and wrote this issue.