Our piece, In Another Move To Court Retailers, United Fresh Joins FMI And American Meat Institute To Co-Locate Event in 2012, dealt with United’s renewed co-location with FMI for its trade show. We also explored broader issues, including how the industry should fund its lobbying efforts. We speculated as to the plausibility of United getting out of the retail show business in exchange for PMA funding its government relations efforts.

Bob Carey, well prior to his retirement form PMA’s top job in 1996, brought up the idea to me and others of funding government relations work in Washington, D.C. out of PMA’s convention revenue stream. Setting aside where this would have left United, the problem I had then with his thought was the issue of control.

In politics the source of money influences the debate. PMA was, and remains, a trade association whose board is weighted to the retail sector. Meanwhile, many national produce industry political issues are of primary interest to growers and shippers. In addition, most practical political power comes from these same growers and shippers. They are the ones that vote, have farming operations, and live in the various districts and states. If a U.S. senator from California wants a direct produce industry opinion on a federal issue such as immigration or food safety, I imagine that Western Growers, California Grape and Tree Fruit League, or California Citrus Mutual might get the first call.

The problem remains: when there is a significant political or regulatory issue over which retailers and growers/shippers disagree, would PMA allow its convention money to be used in a way counter to the interests of its major retailer members?

Chris is a sage man and wisely refers to the well known “Piper Principle” as in “He who pays the piper, calls the tune.” He is undeniably correct. If PMA, as an act of charity or at its discretion, gives annual appropriations to other groups; those appropriations will depend on the judgments of PMA’s then-current board of directors. So if there are contentious issues on which PMA’s buyer-heavy board disagrees with the production sector, there could certainly be an issue on its funding of United’s government relations efforts.

We were suggesting something slightly different, something more akin to a sale. Suppose United sold to PMA its show or at least the retail component of its show and agreed not to operate a show focused on selling produce or not to accept exhibitors that sell fresh produce. PMA would agree to pay something for this. It could be a one-time payment, which United would place in a government relations endowment, or it could be an annual payment that United would pledge to use to support government affairs.

In any case, the payment would not be discretionary; it would be an obligation of PMA being paid to United as consideration for United’s sale of its retail show and its forswearing the sponsorship of another retail trade show. As such, PMA would not be able to stop the money based on its approval or disapproval of United’s position on issues.

There has been, as Chris alludes to, many proposals over the years. We suspect many things are possible, many kinds of relationships doable, but we suspect the prerequisite is giving the associations separate spheres in which to operate. Otherwise the associations are fundamentally competitive and any hope of alliance is too difficult.

This may actually be the last chance for merger discussions. Over the years, two things have happened:

First, PMA’s membership has diverged from United’s — there are a substantial number of PMA members — and not retail members — who are not members of United. Many are producers and marketers who probably joined PMA to get a discount on booths at its October convention.

This whole issue of board allocation is sort of “inside baseball.” We suspect many PMA members have no idea of these matters and just think of PMA as their produce association and assume it represents them in DC. Certainly we have seen many surveys in which PMA members say they expect and want their association to do so.

Second, PMA has gradually inched into areas that were once United’s sole domain. The hiring of Dr. Bob Whitaker as PMA’s Chief Science Officer was something of a watershed. United had a long tradition of having a scientific and technical staff. Decades ago, we were working with Jill Snowdon, PhD, who was United’s Director of Scientific Affairs and, at the time when PMA announced its search for a Vice President of Produce Science and Safety, United employed not one, but two top people in this field, Jim Gorny, now FDA’s Senior Advisor for Produce Safety, and Dave Gombas, Vice President of Technical Services, currently, Senior Vice President, Food Safety and Technology

In the aftermath of the spinach crisis of 2006, PMA felt it was somewhat marginalized by its lack of staff in this area. It couldn’t help its members as it wanted to, it couldn’t participate fully in drafting standards such as the California Leafy Greens metrics, and it couldn’t address inquiries from government and media. So it acquired its own competency and made this part of its mission.

Although Chris is correct that the political heft comes from the grower-shipper community, this heft is probably shrinking as the country grows and less land and fewer people are devoted to ag. So alliances are crucial. If PMA can bring retailers and restaurant chains — who after all are in every congressional district in the country — to support policies that support produce production, that could be a powerful boost for the production sector.

PMA has law firms monitoring issues, it has science and technology people to provide support to regulatory agencies, it has a grass roots program and has funded a big study of economic impact to try to boost influence in congressional districts with limited produce farming, and it has a membership many of which have no other associations representing them in DC. How long will it be, especially if the age of activist government continues, before PMA announces it needs to open a satellite lobbying office in the District of Columbia?

There are a hundred reasons to hold off. It would be expensive, government relations can be divisive, with duplication inevitable — not only with United but with regional groups. Still, we suspect it will not be too long before PMA takes this step, unless an arrangement can be made. Just as it took the spinach crisis to show a hole in PMA’s staff, so it will only take one legislative defeat for some PMA members to say that the association should do it all itself.

But in the end, having PMA take on the role of lobbyist for produce growers makes no sense. As long as PMA doesn’t take official positions on highly controversial things, it is easy for members to assume it is representing them in DC. If PMA actually starts lobbying for or against NAFTA, for or against the PACA Trust and other controversial issues, then members will realize what PMA is doing and some will object. They may object because PMA is on the wrong side of an issue or because PMA is not aggressive enough on an issue. The most likely thing to happen: grower-shippers would decide they need a new national association and would start a “New” United. This is all a big waste of industry time and money.

Virtually all the money raised by both associations comes from grower-shippers and those who sell to grower-shippers. If United withdraws from competition with PMA, those grower-shippers will save big bucks from not feeling compelled to support two shows. Those savings, combined with the savings by reducing the duplication of two groups trying to attract retailers, will be sufficient to make a decent investment in United’s government relations program.

Marketing involves smoothing out the rough spots so we can all buy and sell from and with one another. Lobbying involves choosing. The two functions don’t need to be under one umbrella; in fact they may be better separated.

PMA can still do what it thinks is necessary to represent its members before government and can work with United, WGA and other regional and industry associations as it does today, but it would simply be deciding that it can’t be and shouldn’t be the lobbying arm for growers. It would also be deciding that growers, the source of all the industry sells, deserve a little representation too. And without United, many growers, who don’t have strong regional associations, would not be represented in D.C.

It is hard for board members of PMA, mostly highly successful business people, to put on their industry hat and remember that the goal in running an association is not, necessarily, to “win.” Jack Welch, formerly the CEO of General Electric, speaking at the PMA convention in 2008 said that his attitude toward competitors in a deep recession was to attempt to “Buy them or bury them.” In business, we agree — but absorbing or crushing a century old industry institution beloved by many is not likely to serve the point of serving on these boards — which is to advance the interests of the industry.

United’s deal with FMI is no panacea. FMI is severely weakened from what it once was and the FMI show is only every other year, leaving United to struggle on its own in the alternate years. The time has come when the industry ought to decide, how will we be represented in Washington and how shall we pay for that representation?

United’s withdrawal from competition with PMA on retail shows and PMA’s decision to allow United to handle the lobbying for national production sector points to a feasible solution.

Chris mentions Bob Carey. There are many people on the board of PMA who never knew Bob. They should know that Bob always urged the board to be open to United. Bob was, and is, a man grown wise by experiencing much. He remembered the day when a tiny and almost bankrupt association knocked on United’s door and pleaded with the then-mighty association, rich with its enormous trade show, the biggest in the business, to take over the little association. United dismissed the supplicants — they saw no need for them and sent them packing.

Today we call that tiny group the PMA. 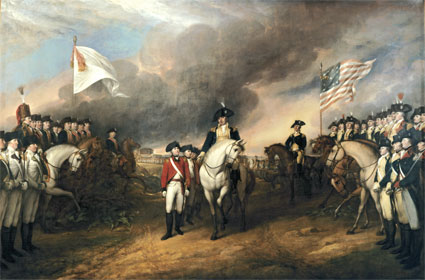 It is said that upon General Cornwallis’ surrender to George Washington at Yorktown in 1786, the British military band, representing the greatest military force on the planet earth, which had just been defeated by a wry alliance between the French navy and a bunch of “rag-tag” colonists, played a song. The selection they chose: ‘ The World Turned Upside Down.”

We think Bob Carey would like the idea of playing that music as background during the PMA board’s deliberations on this matter. Perhaps a useful reminder that the future is not completely predictable.