Each year when the industry gathers for the Produce Marketing Association’s annual convention and exposition, one expects a tone to be set.

Partly this is because it is the trade’s largest event and thus there is a critical mass to reflect on the state of the industry; partly it is because its October timing is just late enough in the year for people to begin summing up how things turned out for the current year and just early enough for people to begin seeing the programs and contracts that indicate how next year is going to turn out.

Even before the event, the Pundit and Bryan Silbermann, President and CEO of the Produce Marketing Association, had an exchange marveling that this would be the 60th annual convention and reflecting on how great oaks really do from little acorns grow.

Much has been made of the extraordinary attendance at the show this year. PMA announced it had an all time record attendance of 19,070 attendees from 58 countries, and although attendance typically does rise when the show moves to California — as opposed to last year’s Orlando location — it is still a formidable achievement in light of the economy and efforts being waged to cut travel expenses.

It is not really surprising though for two reasons: First, during a recession people don’t cut everything back equally; they tend to focus their resources on their most important activities. PMA, with its premiere event status, actually benefits from this trend as it is typically the secondary and tertiary events that get cut. Second, PMA staff, with the consent of the board, didn’t sit around all year waiting for the numbers to go down. They worked very hard to both enhance the event and effectively market it to keep those numbers up. To use an example, speakers like Condoleezza Rice cost a pretty penny, and during a year when staff was more confident the numbers would be great, they might have spent a little less on someone else, but everyone knew this was a year to double down. They did and it paid off big time.

In fact the success went beyond brute numbers. Sometimes high counts don’t translate into time on the floor, but the 2009 PMA trade show was the most crowded we can recall. We attribute a lot of this to the location of two very large hotels right next to the convention center. Today these events are as much occasions for business reviews done in hotel suites as they are the official event and program. The dynamic of these meetings makes it almost impossible to stop. So the answer is to facilitate. One way associations do this is to make meeting rooms available at the convention centers and PMA did that. But the desire for privacy leads many to want to meet off site and so the key is to have a hotel package that facilitates running back and forth.

If someone has a 1 pm meeting at a big hotel and a 3 pm meeting at the same hotel, one probably won’t get on a bus to go to the convention center because the first meeting ends and one has an hour free. It is too much of a hassle and too much risk that the bus won’t be there and you will be late for your second meeting.

But if you can walk, you run over to the hall for an hour. The contrast with a venue like Houston, where so many people were put off in the Galleria district, is obvious. If you have to go back to the hotel for a meeting, you are pretty much gone for the day.

We thought the convention a very hopeful sign for the industry as two industry giants each unveiled very consumer-focused initiatives. In fact, at a show where the trade’s consideration of a mandatory generic promotion program seemed to attract no interest, both Dole and Del Monte were attacking the consumption problem head on. 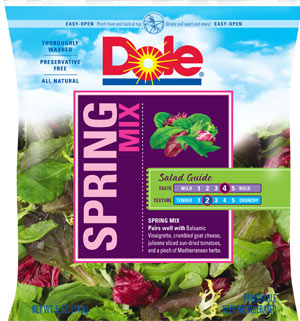 Dole attacked the issue of how to breathe life into a category that suddenly has declared itself mature by unveiling a reimagined line of bagged salads. Built on extensive consumer research, some of which we discussed earlier in the Pundit, it created an easy open bag, a new method for cutting lettuce, especially Romaine, to avoid small slivers and added a scale by which consumers can compare salads based on flavor — from mild to bold — and texture — from tender to crunchy. It also added a guide to help consumers pair salads with dressings, cheeses, etc.

It then tied all this together with a new media effort built around Dole’s Salad Guide — which will also include a personality who will travel the country and act as a spokesperson for the new salads — reaching out to consumers both in and out of the store.

The focus of all this was carefully listening to consumers as to what they liked and what they didn’t like about the bagged salad experience and then changing the product to delight consumers.

While Dole was taking a big business — bagged salads — and trying to reignite growth, Del Monte unveiled an effort to boldly take produce where produce has rarely gone before, the vending machine. 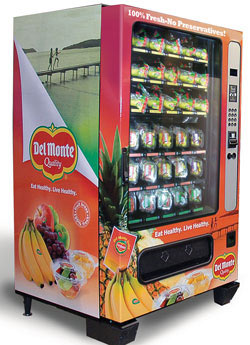 It is not the first initiative to attempt this. In Europe, we’ve covered efforts by Ctifl and in the US by Dole, but Del Monte, with its regional fresh-cut fruit operations and controlled atmosphere technology for single serve bananas, seems particularly well positioned to make a go of it.

Both initiatives by Dole and Del Monte were driven by consideration of real consumers. Dole learned about the frustration of bursting salad bags and the monotony of not knowing what else might go with a favorite salad. Del Monte focused on individuals, from a school kid looking for an after-school snack before he does after-school activities, to a night shift worker grabbing dinner — and noted that both are relying on vending machines and neither had options for good, healthy produce.

We have long repeated a mantra: In order for produce consumption to increase generally, more produce must be consumed by specific people in specific situations.

Though the proposed mandatory generic promotion order gained no traction at the convention, efforts like those by Dole and Del Monte were showing that there were many ways to boost consumption. In a sense, one could say that there is something of a divide in the industry. Some look at how great produce is and say it just needs more promotion — that our problem is messaging. Others look at the situation and say, no, there are real problems with our offer — for example, our salad bags won’t open easily and we have no product in lots of places where people eat.

The industry left Anaheim remarkably upbeat for a downbeat year. Perhaps it is because during this stressful period, many went back to reanalyze their businesses and realized that the answers have to come from doing a better job of serving consumers. Refocused on that task, the future looks bright indeed.