We ran a piece entitled pesticide Spraying Gets More Attention that brought up the issue of what happens as suburbs encroach on farmland. This was followed by a piece we called Pundit’s Mailbag — Green Acres Is The Place To Be?!? — that furthered this discussion.

More recently an interview with John Baillie of the Jack T. Baillie Co. that focused on how growers in California and, particularly, in the Salinas valley, were dealing with such issues.

Of course, the subtext of much of this issue is that in many areas, especially on the coasts, farmland has become very valuable for development. That certainly is true out in Monterey County, and it is also true in Palm Beach County, Florida.

This county is home to the Pundit who moved down from New York State. It is also the home to many produce companies, including Pero Vegetable Company. Peter Pero, an immigrant from Sicily, had a farm in western New York and this family also made the migration south.

Headquartered in Delray Beach, Florida, the family has farms in Delray Beach, Omega, Georgia and Benton Harbor, Michigan and has grown to include distribution and consolidation facilities as well as offshore deals. It also has gotten involved in greenhouse growing in Canada and itoperates the only commercial hydroponic operation in Palm Beach County — a fact that led to an article in the Sun-Sentinel, a Ft. Lauderdale-based publication. The piece is entitled Hydroponics Takes Farming Into Future: 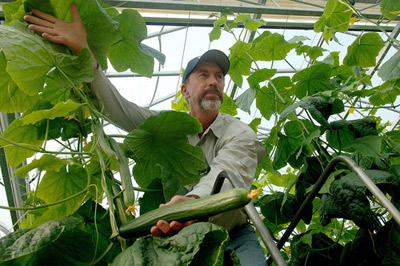 West Delray — It looks like something out of Jack and the Beanstalk. Or a mad scientist’s lab.

But Pero Vegetables Co.’s 14 acres of greenhouses on State Road 7 are home to hydroponically grown cucumbers.

From the outside it’s hard to tell the transparent structures house colossal vines that spring from about a foot off the ground, wrapping around strings hanging from the ceiling. The plants rise as much as 15 feet and boast bright green leaves as large as elephant ears. A half-dozen 2-foot-long cucumbers hang from each plant.

pero Vegetables is the only commercial hydroponic grower in Palm Beach County, raising European cucumbers without soil, faster and bigger than they could be grown in the ground. Its 7-acre hydroponic operation is an impressive spread of agricultural technology and gives a glimpse of what might become the future of agriculture

‘It’s the future when you’re limited in land,’ he said. ‘We are actually trying to promote it.

While an acre of land might produce 800 crates of cucumbers per season, one acre of hydroponically grown plants can yield as many as 18,000 crates per season. …

‘It’s the way everyone should go and will go in the future,’ Hebb said. ‘It’s an environmentally safe place to grow while being friendly with the environment around us.’

The spinach crisis raised the issue of food safety and whether field growing doesn’t have inherent challenges. Consumer demands for quality already were driving the industry to more of a controlled environment.

Perhaps a need for higher yields in less space might be the final key to seeing controlled environment agriculture really assume a mainstream position in the world of produce.