Perishable Thoughts –
Be Whatever You Resolve To Be

In an earlier piece we gave our March travel schedule, and it involves teaching either undergraduates, graduate students or executive development courses at Cornell, Michigan State and UC Davis. We always decline any compensation for teaching at colleges and universities, thinking it our way of giving back to the industry and helping it grow in the years ahead

Of course, we teach a specific subject each time — perhaps marketing or food safety, sustainability or the strategic implications of the financial crisis. Some of these topics can be dour but we strive to identify a hopeful angle.

We just returned from Cornell where we taught at the United Fresh Produce Executive Development Program (obviously it’s too late for this year, but e-mail Victoria Backer here to be put on the mailing list for next year), and we are always so impressed with the executives who attend. Ed McLaughlin and his team work everyone hard and scarcely a one of the attendees doesn’t go back to the room to do e-mail, voice mail and catch up on work. They all deserve a lot of credit.

Next week, we’ll head off to Michigan State and deal with a younger generation. We always enjoy dealing with undergraduate and graduate classes. The students are so earnest… they may not always know what they believe or they may believe wrongly, but they believe intently, and in the purity of that passion is a font of much of the progress that society makes. Immersion in their passion is a fountain of youth for us all.

The following week we’ll be at UC Davis teaching in a new marketing program and we look forward to working with the industry attendees and the other faculty members to establish traditions and habits that will secure a sound place for this program in the panoply of industry education. This one you can still get into, so take a look at registering right here. We don’t know everyone who will be attending but we have no doubt we will leave inspired by the commitment to self improvement exhibited by all who attend.

While thinking about students, it seems appropriate to send a hat tip to Rob Mumma, Vice President of Sales and Marketing for Belair Produce in Baltimore, Maryland. Rob was kind to send over today’s most apropos Perishable Thought:

“You may be whatever you resolve to be”
Lectures to Young Men, on the Formation
of Character & c.
By Reverend Joel Hawkes D.D.
1828

This phrase is popularly attributed to General “Stonewall” Jackson and this one is inscribed on an arch at the Virginia Military Institute. Here is VMI’s explanation of how it got there:

“What are some famous Jackson quotations? Which phrase is inscribed on the VMI Barracks?”

“You may be whatever you resolve to be” 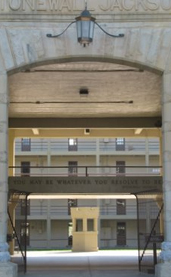 These words are inscribed over the Jackson Arch entrance to the present-day VMI Barracks. During his years as West Point cadet, Jackson began keeping a notebook in which he jotted down inspirational phrases that he believed would aid him in the development of his character and intellect. He continued to add to this book throughout the 1850’s. Jackson was not (and never claimed to be) the author of most of these maxims; rather, he collected ideas and phrases from the books he read. This particular principle is attributed to the Reverend Joel Hawes and first appeared in an 1851 work, Lectures to Young Men, on the Formation of Character & c. Jackson’s original notebook is located in the George and Catherine Davis Collection at Tulane University.

In fact, the quotation is culled from a larger section:

“My friends, you may be whatever you resolve to be. Resolution is omnipotent. Determine that you will be something in the world, and you shall be something. Aim at excellence and excellence will be attained. This is the great secret of effort and eminence. I cannot do it, never accomplished anything; I will try has wrought wonders.”

The quote can be viewed here:

Lectures to Young Men, on the Formation of Character, &c: Originally Addressed to the Young Men of Hartford and New-Haven, and Published at Their United Request (Google Books, download entire volume here)
By Joel Hawes, Edition: 6
Published by Cooke, 1832
172 pages, Pg. 101

The quote can be purchased here:

The Reverend Joel Hawkes does not seem to have been born with a resolve for the life of a Reverend; it seems to have come to him. This paragraph from the Norfolk County MA Archives Biographies explains:

Joel Hawes: was born Dec. 22, 1789. (Died 1867) The ancestors of Dr. Joel Hawes were among the early settlers of New England. They came from Lincolnshire, England, and settled in that part of Dedham which in 1673 became Wrentham, Mass.

At the age of fourteen, his father returned to Brookfield. Here Joel had still fewer advantages for improvement, living three and a half miles from church and two from any school. He went in a few years to visit two uncles and seek his fortune in Vermont. He there learned the cloth dressing trade. He says he was here brought into bad company and spent much time in dissipation and card playing. He was, however, ambitious to earn money, and chopped wood by moonlight to increase his little store.

He attended church for the first time in two years. The thought that he had desecrated the Sabbath awakened by that Sunday service, “pierced him like an arrow of the Almighty that drinketh up the spirit.”

Among his associates in Medway was Cyrus Kingsbury, who was learning the cabinet maker’s trade of Maj. Luther Metcalf. Young Kingsbury, while mowing on the Fairbanks lot, started a rabbit and rushing to catch him came in contact with his scythe and cut a main artery in one leg so that he came near bleeding to death. Hawes watched with him, and his pious resignation and conversation is supposed to have confirmed him in his purpose of a new life.

He entered Brown University in 1809, and in 1810 taught school in Medway, at eighteen dollars per month.

He graduated in 1813 from Brown University, Rhode Island, studied theology in Andover, was duly licensed, supplied the pulpits in Newburyport, was afterwards called and ordained, March 4, 1818, pastor of the First Church in Hartford, Conn.

He married, June 17, 1818, Miss Louisa Fisher, daughter of William C. and Lois (Mason) Fisher, of Wrentham, who, upon her mother’s side, was a descendant in direct line from John Mason, who came in the May Flower in 1620, from England.

Dr. Hawes’ pastorate continued forty-four years from 1818 to 1862. The number of his printed publications were fifty-one. The other Congregational churches in Hartford were largely composed of colonists from his own.

Quite a lot of Joel Hawes’ works are available through Google Books here.

An 1881 book, “The Life of Reverend Joel Hawes, D.D,” is available for view, and download, through Google Books here.

This Perishable Thought is enormously empowering and truly inspirational. What could fire up a human soul more certainly than the belief that “You may be whatever you resolve to be”?

Yet, the question lingers, inspirational it may be, empowering it may be, but is it, in fact, true?

One can imagine thousands of professors in all the newly designated centers and departments that have been built up in the last half century — the African studies centers, the women’s studies centers, the gay/lesbian and transgendered study centers, etc., and these professors would say no, that much of humanity, through much of history has been restricted in what they can become, limited and imprisoned by laws or social mores and conventions.

As a matter of fact, this is all quite true… to say otherwise would be to imply that the reason a black slave never became President was because not one ever resolved to be President.

Yet, the literal truth of this critique, that all of us are constrained by where and when and into what circumstances we were born, may obscure a deeper truth that this quote embodies.

We prefer the larger section that contains the quote:

“My friends, you may be whatever you resolve to be. Resolution is omnipotent. Determine that you will be something in the world, and you shall be something. Aim at excellence and excellence will be attained. This is the great secret of effort and eminence. I cannot do it, never accomplished anything; I will try has wrought wonders.”

For here it is obvious that the good reverend is not saying something as trite as one can have any specific thing one wants by trying hard. It is a rather more general and, in a sense, a more profound statement on the human condition. That wherever and whenever we might be, we can opt for excellence; we can try and if there is, perhaps, a bit of hyperbole in saying that all can obtain excellence by simply trying to do so, it is certainly true that one is likely to be more excellent by striving for excellence than if one aims for mediocrity.

It also seems likely that the notion that resolution is omnipotent is the most profoundly liberating doctrine to preach to people of all colors, sexes and types, for while the oppressed may not have access to money, weapons or education, even the most humble have their own resolution to embrace.

During these times that are not so easy, there is something worth noting in this idea. For one may not control the environment but one controls ones’ own resolution — the way one elects to deal with the hand one is dealt.

The students we teach, of all ages and levels of experience, are electing to strive for a kind of excellence; it is an example all of us can draw strength from.

Once against, thanks to Rob Mumma of Belair Produce for contributing today’s Perishable Thought.

Perishable Thoughts is a regular section of the Perishable Pundit. If you have a favorite quote that you would like to share with the industry, please send it on. You can do so right here.