We spent quite a bit of ink — or on the web maybe we should say electrons? — discussing the lawsuit between Jim and Theresa Nolan, as well as their company, with Ocean Spray. You can see those articles here.

Things have been somewhat quiet on that front as both sides have been busy preparing for a trial, which is scheduled to begin in April.

Yet the cranberry industry has been anything but quiet; in fact, the fresh cranberry business has experienced what can only be described as an earthquake.

Habelman Brothers Company, Ocean Spray’s largest fresh cranberry grower, one that last year produced roughly 460,000 cases of about 990,000 total fresh volume, has left the co-op and is striking out on its own.

Ocean Spray is trying to play it cool. Chris Philips, who handles Corporate Communications for Ocean Spray, issued a statement to customers; it was notable for its brevity:

This was no a surprise to us, and we are well prepared to source the necessary fruit and supply the highly valued fresh fruit markets we have established over the past 78 years. Ocean Spray sets the standard for the highest quality fresh cranberries on the market, and we will accept nothing less than the best as we look forward to the cranberry season ahead.

You have to give Mr. Philips and Ocean Spray credit for keeping a stiff upper lip, but losing almost half of its fresh supply, in one fell swoop, is certainly no cause for rejoicing at Ocean Spray headquarters.

Plus, Ocean Spray is in a Catch-22; the co-op can’t in good conscience urge its growers to grow more fresh because if, by some miracle, Ocean Spray succeeded and managed to replace the lost Habelman volume, fresh prices would collapse, as that would be an enormous increase in total fresh production.

What exactly is going on? How will Habelman market its fresh volume? We asked Pundit Investigator and Special Projects Editor Mira Slott to find out more.

Q: We heard your company decided to leave Ocean Spray, wanted to confirm that and learn more about your plans.

A: That’s correct. We left Ocean Spray at the end of 07, beginning of 08. We had been with them since 1959. This was a big thing. Our company’s been around since 1907, so we actually were independent for longer. This is a decision we took very seriously.

Q: What inspired the decision?

A: We’re a very large cranberry grower; there are not that many companies that do such a sizable business in fresh fruit. Ocean Spray is primarily a juice company. We thought we’d be better off focusing on fresh cranberries.

Our size hopefully will put us in a position to do that.

Q: Could you provide a perspective on the company size, and the breakdown of fresh to processed product?

A: We’re primarily fresh fruit — on average 70 percent of our business. We sell our fresh berries in 12-ounce poly bags or bulk in 20-pound boxes. We grow 640 acres of cranberries. That’s a lot of cranberries. We’ve been averaging around 450,000 cases for the last three years. 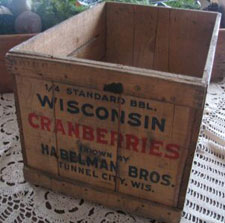 Q: Many of our readers are on the buying end of the produce industry and would be interested in a new source for cranberries. What is your marketing strategy?

A: We’re not sure right now how we’re going to market; in another week, I probably could share more with you. We are looking at a few contracts.

Q: Could you discuss the different paths you could pursue?

A: You hit the nail on the head. We could go 100 percent on our own with our own label and Jim and Theresa Nolan could represent us and sell our product, or go through another broker, or partner with a company like Dole. We have a lot of options on the table.

Q: As you build your company’s future, tell us more about the rich family history at its core.

A: It’s always been in our family with the Habelman lineage. It was my great grandfather who purchased the original marsh outside Tomah, Wisconsin, in 1907. Our company name is Habelman Brothers. That comes from when my grandfather and his brothers expanded the business and built it to what it is today.

I’m fourth generation, working on the fifth; I have two boys, Riley, age 6 and Carter, age 4.

Q: It sounds like you’ll be opening up all sorts of opportunities for them.

A: I invite you to call me back in a week or two. There are a lot of exciting options out there. It’s a little nerve wracking. I’m not saying Ocean Spray wasn’t taking the fresh business seriously, but the company had a lot of other things to deal with.

We didn’t feel Ocean Spray wanted us to grow as a company. We want to expand and get more of our fresh product out there. Ocean Spray is such a huge operation we felt it didn’t always treat customers the way we may have wanted. We are energized about providing customers with a new option.

There is a lot of talk swirling around the industry. There is word that a Blake Johnston from Canada is trying to build around the Habelman volume a “grand alliance” that will also include the Pundit’s old shipper, Decas Cranberry Products.

Dole has been looking for more volume in fresh cranberries for a long time. Word is that Johnston would like to see C.H. Robinson market the deal, and the Nolans, aside from vast knowledge, great contacts and long experience in the field, would also have very special motivation to make Habelman a big success on its own.

Ray is actually doing the whole fresh industry a big favor. Many years ago, we were told by an Ocean Spray executive that Ocean Spray actually didn’t like being in the fresh business. It was such a tiny percentage of what they did at Ocean Spray, but the source of 99% of the problems and complaints. The company only bothered with the fresh business because it provided a “halo effect” for the juice and other processed product.

That may be so and, in fact, maybe Ocean Spray should withdraw from the fresh business and license its name to a company focused on fresh. No business is likely to obtain its potential if the proprietor doesn’t like it very much.

It sounds like Ray, his family and management team felt the consequences of this begrudging attitude toward fresh and decided they could do better on their own.

It is a brave move but somehow one suspects in runs in the family. After all, when Ray’s great-grandfather began raising cranberries on 13 acres of marshland back in 1907, one suspects that was a pretty gutsy move as well.

Besides, the Habelman heritage was marketing its own cranberries, so it’s a back-to-the-future situation.

Checking on the harvest this past fall are
Ray’s younger son Carter and his pal Otis.

We’ve never had the pleasure of meeting Ray, but we print magazines in Wisconsin and with the Jr. Pundits (William, age 6 and Matthew, age 4) matching up with Ray’s boys by age, it looks like the whole Pundit family will have to take a road trip. Maybe Riley and Carter would explain a bit about cranberry farming to a couple of new friends.

It is certainly going to be a very exciting time in the fresh cranberry business. We wish Ray and all the folks at Habelman well.