Our piece, New York Produce Show And Conference Retains DMA Solutions For Consumer-Influencer Outreach, spoke to our decision to use the first iteration of The New York Produce Show and Conference as an opportunity to go beyond the traditional “Press Room” into a pro-active approach of finding those in a position to influence consumers and bring them into closer communion with the world of “Fresh.”

The effort was inspired by a blog post Dan’l Mackey Almy of DMA Solutions wrote, suggesting a productive use for slow “third days” at some of the big conventions.

Well, The New York Produce Show and Conference only has a one-day trade show, but we see this type of outreach as crucial, as integral to what both the Eastern Produce Council and PRODUCE BUSINESS were trying to accomplish when we launched the event.

Dan’l and her team have simply been dynamos, and it became obvious that the potential for this outreach, not only to traditional media but also to influential bloggers, chefs and their organizations, health-care and health promotion groups and others in a position to influence consumers — had barely been approached.

Dan’l has relationships across the country, and the Pundit has some friends as well and, when the need for a New York-based team became obvious, there was only one choice — the doyen of food and beverage communications, Anita Fial of Lewis & Neal, a division of CRT/tanaka.

Over the years, Lewis & Neal has worked with many of the key players in the fresh produce and the broader food space, including:

Now Anita, Jason Stemm and all her team at Lewis & Neale are working side by side with Dan’l and her team and all of us at The New York Produce Show and Conference to make this event a moment when we start to break through.

This is of no small significance. Every time there has been a food safety crisis, the Pundit has found himself speaking with loads of reporters that just aren’t knowledgeable about the subject they are assigned to cover in a crisis.

If we can build relationships, impart knowledge and help these influencers to better understand the business of fresh, next time there is a crisis or someone issues a report, these important influencers will react from a base of enhanced knowledge. That is an enormous win for the industry.

Here is the invitation we are using to invite the influencers to “Connect with Fresh”: 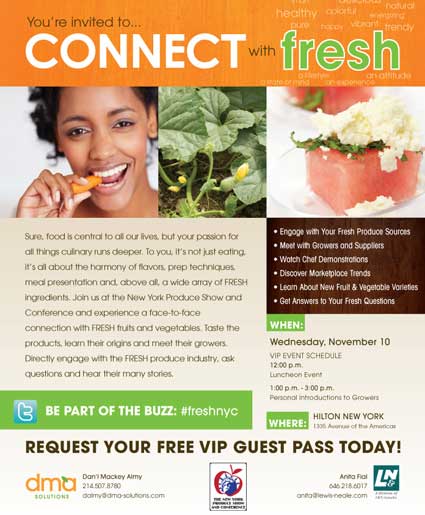 We are gearing for a great event and one that will serve a greater purpose for the greater good of the industry… and the population at large.

For Dan’l and her team at DMA Solutions, Anita Fial and her team at Lewis & Neale, for all of us at the Eastern Produce Council and PRODUCE BUSINESS… and indeed for every exhibitor, sponsor and attendee at The New York Produce Show and Conference, this makes the unveiling of this event just that much more significant…and that much more meaningful. Many thanks to Dan’l and Anita and a heartfelt welcome aboard.