New York Metro’s Economy Is 12th Largest In The World

When we made an announcement about a new industry event in a piece we titled, New Event Planned for 2010: Eastern Produce Council and PRODUCE BUSINESS Announce The New York Produce Show And Conference, we were not prepared for the avalanche of support. In the month since the announcement, despite Christmas and New Year’s Day intervening, we quickly sold over half the exhibit floor, more than 120 companies.

Although, of course, much of this support for the show came from industry members looking to support the members and staff of the Eastern Produce Council and the team that puts out PRODUCE BUSINESS, PerishableNews.com and, of course, the “Pundit” — the business case for the show is overwhelming.

In fact a new report from The United States Conference of Mayors makes the case pretty dramatically.

The report includes a chart that is titled, “If U.S. Metro Economies Were Nations.” We’ve excerpted the top 15 listings in the chart you see aside this article and it shows that only the New York metro area would rank as one of the top 15 economies in the world if metro areas were counted like countries. That means New York Metro has a bigger economy than, say, India, Mexico, Saudi Arabia, Australia, South Africa. In fact, if it were a country, New York Metro would have the 12th largest economy in the world. 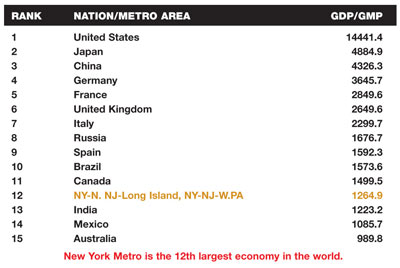 And, of course, The New York Produce Show and Conference draws on a larger area than this official definition of a metro area. For example, we are sending a bus down for an exclusive tour of the brand new Philadelphia market and a lot of folks from Philadelphia are coming on up for the show. Philadelphia Metro itself ranks 37th on this list with an economy larger than Ireland, Thailand, Finland, etc.

We can’t help but be excited about the opportunity… when Pundit Great-Grandpa Jacob Prevor landed in New York and set up his produce business at the old Wallabout Market in Brooklyn, he must have been astonished at the gap between what he knew back in Russia and what he saw in America.

The hopes and dreams immigrants carried as they passed The Statue of Liberty and prepared to land in New York were wonderfully captured in the animated “An American Tail” produced by Steven Spielberg’s Amblin entertainment. The movie has mice play the role of European Immigrants and the featured song includes the line “There are no cats in America and the streets are paved with cheese.” Watch it here:

The streets of Manhattan may not literally be paved with gold, but there is no larger or denser buying audience in the country.

If you are interested in exhibiting or sponsoring at The New York Produce Show and Conference, click here.

If you would like to see where your metro area or country fits in on the rank of national economies, click here.