As we head off to our 29th consecutive PMA, we are reminded of the powerful draw of this massive event and of Fruit Logistica in Berlin, the two rivals for largest produce event of the year.  These are incredible events, with scale and resources that can’t be matched. We recommend that anyone who can attend these events do so, learn and network all you can.

Yet no one continental event can meet every need.

It was just over four years ago that we joined hands with our friends at the Eastern Produce Council to bring forth a new industry institution, The New York Produce Show and Conference.

The event has been enormously successful, and that success has come about because it filled a void. There was just nothing like it anywhere near New York. Yet there is more to it than that.

The event has heart, because that is what you get when the people putting it together really care about the industry. We have raised hundreds of thousands of dollars for the Eastern Produce Council to use for scholarships and the betterment of the industry. We have brought several hundred students — both ag economics and culinary — into the event, an investment of more hundreds of thousands of dollars in the future of the trade.

Beyond money, we brought cutting-edge ideas, world-class speakers and a chance for thousands of people, some entry-level, some senior-level to connect with a broader industry and realize they are a part of something grander than they realized.

Now we go to work on creating something grander still. We grew up in New York, great-grandson, grandson and son of produce men, working on the great wholesale markets of the city. Yet the Pundit Poppa, Michael Prevor, was a different kind of wholesaler; he had the vision to get involved in importing and exporting when that insight was rare and the opportunity obscure.

Today the global nature of the produce industry is clear. Import and export are large industries in produce growing and consuming sectors around the globe. Yet we would contend that in this post-industrial economy, the most important exchanges are not necessarily of goods; they are of ideas and competencies.

Food safety, sustainability? They were doing all this in the United Kingdom before it was cool to think about it in the US.

There is injustice here. What has happened is that because the great continental trade show of the produce industry is in far-off Berlin, attention was diverted. Our thought was to right this wrong: To bring attention to an important business partner and thought leader in the industry, to restore the United Kingdom to its rightful place in the councils of the global industry.

The greatest thing about being the Pundit is that we get to know the smartest people in the produce industry around the globe. So we called our old friend Tommy Leighton. He used to run the Fresh Produce Journal in the UK and we found we shared a vision. So he joined on as the Managing Director of our new London-based company.

Then we went to visit our good friends at the Fresh Produce Consortium, the great national association for the produce trade in the United Kingdom. In time, a vision congealed and we decided to work together to build a new industry institution.

Here is the official announcement: 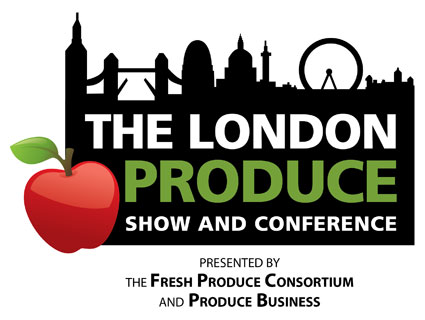 The first edition of The London Produce Show and Conference will be held at Grosvenor House, Park Lane, London on June 4-6, 2014.

The event will kick off with an evening cocktail reception for buyers, exhibitors and their guests on June 4. The next day begins with an opening breakfast session and then moves into the main feature: a boutique exhibition in the hotel’s Great Room, Europe’s largest five-star exhibition space. In conjunction with the trade exhibition, will be a series of seminars, breakout sessions and chef demonstrations running throughout the day on June 5.

The final day of the event, June 6, will then give visitors the opportunity to tour some of the leading fresh produce locations in and around England’s capital city, with hosted tours of wholesale markets, retail stores, production sites and import hubs.

“London is an iconic city for many reasons, not only in the UK and Europe, but in global terms,” said FPC chief executive Nigel Jenney. “As home to around 11 million people and one of the most culturally diverse populations in the world, as well as some of the most widely recognised tourist attractions on the planet, it has a huge year-round demand for the full range of fresh produce.

“The UK fruit, vegetable and flower market has long been perceived as a dynamic thought and practice leader for the fresh produce industry. This event will highlight everything that is still great about the British produce industry, but it is also a brand new trade exhibition, conference, networking event and showcase for the global industry as a whole.

“The show will bring together buyers from the retail, wholesale and foodservice sectors, as well as grower/exporters and suppliers from around the world and put the UK and Europe back in the limelight as a key global destination for high quality fruit and vegetables.”

There will be a limited number of exhibition stands available, as the “boutique” event aims to give both exhibitors and visitors time to see an entire show floor, rather than feeling time-constrained and leaving, having missed possible business opportunities. Jenney added: “There are other exhibitions in Europe, but we feel that the opportunity to be ‘noticed,’ both as an exhibitor and a visitor, is crucial if companies and associations are to get true value for money. We want to help producers and marketers get their messages out to a wider audience and bring them together with the people who matter most to them – their existing and potential customers. At the same time we want to give the buying segment of the trade a convenient venue, right in central London, where buyers can engage with the global supply base.”

Jim Rogers, president of FPC, said: “From a UK industry perspective, this is exactly what we need to give us some much-needed impetus after a few difficult trading years. The show will bring together growers, exporters, importers and buyers from all sectors of the industry, all over the world and highlight the incredible depth of talent and knowledge that we still have in the UK, despite our best efforts to downplay it in recent times.”

And Andrew Garton, category director of produce and horticulture at Wm Morrison and a member of the FPC board, also welcomed news of the event. “Any event that attracts the world’s fresh produce industry to the UK is good news for our domestic industry as a whole and, representing one of the major buyers of fruit and vegetables for the British consumer, my team and I will be at Grosvenor House to engage and connect with our colleagues from all corners of the globe. In my opinion, the UK supermarket sector has led the world in food retail innovation during the past two decades and we’re keen to take advantage of this opportunity to reaffirm our credentials with the industry’s leading suppliers.”

Jim Prevor, editor-in-chief of Produce Business and known internationally as The Perishable Pundit, said: “The people of New York and London have always enjoyed a close link. We have had an incredibly uplifting experience introducing a show to New York over the past four years with the Eastern Produce Council. We are delighted to be working with FPC to deliver The London Produce Show and Conference to a city and country that is lacking such an industry event.

“Our aim with The London Produce Show and Conference is to link European buyers with a new global supplier base and allow growers, exporters, importers and suppliers to talk directly with their target audience, while also giving visitors and exhibitors the opportunity to enjoy the magnificent city of London,” said Prevor.

To exhibit, attend or for additional information please go to LondonProduceShow.co.uk

So the vision expands. We are going to begin a Sister City program between the produce trade in New York and London, bringing wholesalers from Hunts Point and other markets in the east to New Covent Garden and other markets in the UK, and we will bring them the other way as well. We are bringing important players from the Fresh Produce Consortium to the New York event and leaders from the Eastern Produce Council to London.

We see two separate events, each serving its unique market, but we also see a great intellectual exchange in which the two great cities of our civilization join hands to exchange ideas, to rise to the highest levels of thought leadership and industry practice.

And guess what? We get to do all this — to make such a difference, to build such a brighter future — in incredible places such as New York and London.

The New York event is coming up in December. If you would like to exhibit, sponsor or attend, just let us know here.

And if you would like to be a Charter participant in this brand new industry event, The London Produce Show and Conference is kicking off in June 2014 so just click one of the options below.

We look forward to seeing everyone in New York and in London!

If you are interested in exhibiting or sponsoring an event at The London Produce Show and Conference, please let us know here.

If you would like information on attending The London Produce Show and Conference, just let us know here.

The event is being held on Park Lane in the historic Mayfair district, convenient to all of London — theater, shopping, museums, landmarks etc. The venue is the five-star Grosvenor House, a JW Marriott Hotel. You can book in our room block right here.