At United’s FreshTech Conference in Palm Springs, United Fresh gave out its first version of a special award long given out at the IFPA convention before its merger with UFFVA:

Honoree Gives Time and Technical Expertise
to the Produce Industry

The annual United Fresh Technical Award honors an individual who has made significant technical contributions to the overall fresh produce industry in the areas of food safety, food quality, innovative technologies and overall industry image.

“Drew has been a strong advocate for industry-led food safety research initiatives, and he has unselfishly given his time and technical expertise for the benefit of all of us involved in the fresh and fresh-cut produce industry,” said United Fresh Senior Vice President of Food Safety and Technology Dr. Jim Gorny in his introductory remarks. “He has also played a pivotal role in the drafting of the lettuce and leafy greens GAP metrics and audit verification scheme for use by the California Leafy Greens Marketing Agreement.” 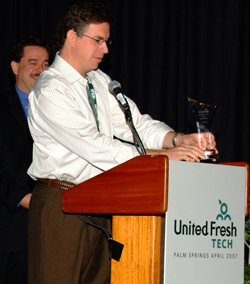 Drew is a member of the United Fresh Food Safety and Technology Council and participates in numerous allied professional associations and buyer councils such as the McDonalds and Yum! Brands supplier councils. In addition, he often advocates produce food safety and quality perspectives at national buyer meetings, such as the recent National Restaurant Association meeting held a few weeks ago in Monterey, CA and the national food safety summit in Washington, D.C.

In his acceptance remarks, Drew thanked United Fresh and acknowledged his industry colleagues. “I am truly honored to receive this award. There are so many people deserving of this recognition. It is all of us coming together — our unprecedented collaborative work in the area of food safety that has made the industry stronger,” he added. On hand to see Drew receive the award were his wife Aimee and two children Courtney and Norah.

Drew is a native of Minnesota. He holds a bachelors degree in biological sciences and English literature from Lawrence University in Wisconsin, where he graduated with honors in biology. His first job out of college was as an intern at one of the major fresh-cut processors in the early 1990’s on a project called “desert storm” to determine the causes of premature value-added lettuce breakdown in desert-grown lettuce. Drew worked as the fresh market manager for Campbell’s mushrooms and later as the new ventures manager for Dole Fresh Vegetables during the construction and start up of new fresh-cut processing facility in Sweden. At Taylor Farms, he has worked as a quality assurance supervisor, quality assurance manager and now serves as vice president national quality systems.

The United Fresh Technical Award was established by the International Fresh-cut Produce Association (IFPA) in 1995 in recognition of technical excellence. Following the merger of IFPA and United last year, United Fresh has continued that tradition.

Drew is held in exceptionally high esteem. All through the spinach crisis, people constantly were calling the Pundit to tell us what Drew McDonald thought. Sometimes they hadn’t even spoken to the man but, like Kremlinologists of old, they would watch him in public meetings and fire off e-mails on their blackberries to let the Pundit know when he was nodding his head in agreement or raising an eyebrow in doubt.

Now he is everywhere, representing Taylor Farms as it donated $2 million in cash and $1 million of in-kind research to the Center for Produce Safety at UC Davis and receiving this award from United.

Perhaps his value to the industry is that he crosses the lines between science and communications so well. There are plenty of scientists and plenty of communicators, but it is a good bet that when Drew, as an undergraduate, was pursuing his dual major in both biological science and English literature, he never realized how far that combination could take him.