Making The Case For Curly Spinach 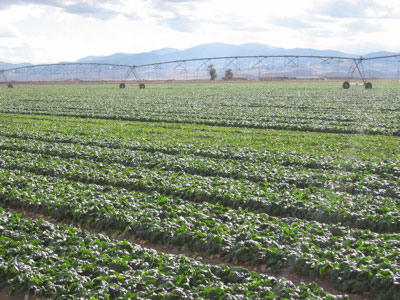 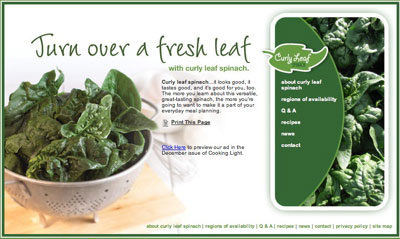 The Pundit has never understood why the FDA included curly leaf, or savoy, spinach in its recommendation not to consume when it is a distinctly different product than the baby leaf bagged spinach that was implicated.

Clearly others also think it is important to develop an independent identity for this product as there is a new consortium that has come out with a new website for consumers: www.curlyleafspinach.com

Q: Who formed the site and how is it funded?

A: Tosca is funding the site and currently maintaining it. The curly leaf industry as a whole talked about creating a site before the spinach E. coli crisis, but the outbreak encouraged the development quite quickly.

Q: Is there an actual association of members behind the site’s creation?

A: No, not an official association, but a remarkable collaborative effort among growers and repackers, including Verdelli Farms (Harrisburg, Pennsylvania), Action Produce (South San Francisco, California) , Pentagon Produce (Uvalde, Texas), Tiro Tres, (Eagle Pass, Texas), and Aunt Mid’s Produce Company (Detroit, Michigan). We’re the facilitators. We’ve had conference calls with the industry as a whole, and everyone has responded and aided with advertisements and invaluable input.

Q: What is the site’s purpose?

A: It’s an intended resource for consumers to educate them on curly leaf from proper handling to recipe information. Another goal was to help spark interest, to motivate consumers to add spinach to their meals. Also to encourage consumers if they don’t find curly leaf on the shelf to ask their local grocer about when they’re getting it back in.

Q: What feedback have you received from consumers so far?

A: The questions from our website have been very positive. We’ve been approached by cooking clubs and cuisine magazines wanting to learn more about adding curly leaf as an alternative to flat leaf. Consumers inquire if a store location or chain carries curly leaf, when it’s available seasonally, what size bags it comes in, etc. We’ve received many thank you letters for making curly leaf available in their states.

Q: Have you received any questions or concerns related to food safety issues?

A: In the fall, food safety was very huge, but we’re finding most consumers are interested in nutritional issues regarding their diets. The site does provide a good educational tool on how to handle and prepare curly leaf spinach.

Q: How do consumers learn about the site?

A: We are looking at packaging efforts to put the website address on products. In the meantime, consumers can find it by going to Google. On the leafygreens.org website there is a link to our site. We also ran a full page ad in the December 2006 issue of Cooking Light Magazine, reaching 1.7 million consumers.

A few Pundit cheers are due to Tosca, which funded this venture. In an act of enlightened self-interest, Tosca, which supplies “industry-specific, returnable containers,” recognized it could help its customers and itself at the same time. In the release accompanying the announcement of the new website, this is what was said:

Green Bay, Wisconsin — As the new year begins, a healthy, flavorful vegetable is making a comeback to grocery store produce departments, and a new website is providing meal planners with everything they need to know when adding spinach to the menu.

The website, www.curlyleafspinach.com, was created for consumers on the heels of a U.S. Food and Drug Administration recall of spinach in September, impacting the entire spinach industry. “Sales of all spinach have been affected. We hope the website will reassure consumers and grocers that curly leaf spinach, when handled properly, is a nutritious, great-tasting addition to meals,” said Jennifer Verdelli, spokeswoman for Verdelli Farms, Harrisburg, Pennsylvania.

Curly leaf spinach, also known as Savoy or semi-Savoy spinach, is grown in the East, Midwest, South, and Mountain States regions of the United States, and is placed in highly sophisticated, ice-packed, sanitized containers when it is harvested. The containers ensure the safety and quality of the product, and curly leaf spinach is available year-round to grocers and consumers across North America.

“It’s unfortunate that the recall was so broad at first,” said spinach grower Dondee Lindenborn of Pentagon Produce, Uvalde, Texas. “All spinach got a bad rap when, in reality, the cause for concern was very isolated. Consumers need to know they can trust the high-quality curly leaf spinach that is being sold at their favorite grocery store.”

Consumers who can’t find curly leaf spinach in the grocery store produce department should talk to their grocer about its return, according to Verdelli. “We are partnering with growers, industry trade groups, and the government to develop new processing and handling standards to ensure even greater consumer confidence. Grocers want to sell spinach. We want grocers and their customers to be absolutely certain their curly leaf spinach is safe.”

Tosca Ltd., headquartered in Green Bay, Wisconsin, supplies the food industry with industry-specific, returnable containers, ensuring food and beverage manufacturers delivery of the right container, in the right condition, in the right quantity, to the right location, at the right time. Container functionality is standardized, and cleaning and sanitizing regimes are verifiable. For more information about Tosca Ltd., visit the company website at www.toscaltd.com.

The website gives a lot of useful information such as recipes and where the spinach is grown. No claims of “ready-to-eat” here. In the Q&A part of the website, here is what they say:

Should I wash curly leaf spinach after I bring it home from the grocery store?

Consumers should take precautions when using fresh produce of any kind. Always wash fruits and vegetables thoroughly before eating, and make sure preparation surfaces are sanitary.

The U.S. Food and Drug Administration is reminding consumers that proper storage of all fresh produce can affect both quality and safety. To maintain the quality of fresh produce the FDA recommends storing it in a clean refrigerator at a temperature of 40° F or below.

One wonders if, as a previous letter-writer claimed here, the “no need to wash” claims aren’t often overstated?

Curly leaf spinach growers are not a major financial force in the industry but, by working together and with their suppliers, they have been able to do a nice job on this website and even run an ad in a big consumer magazine.

There are plenty of parts of the industry that could learn from this example.