Making Bitter Veggies Sweeter May
Be Key To Increased Consumption

We’ve written many pieces on industry efforts to get children to eat more produce — from a Produce for Better Health award-winning school teacher to a whole series on cartoon marketing to the Food Dudes program in Ireland, UFFVA’s efforts to get federal funding for school and other programs and PMA’s deal with Scholastic.

Yet we have always been a little concerned that many of these efforts seem focused on snack fruits when many of the important benefits of eating produce come from more bitter tasting vegetables.

We named our very first Pundit post The Bitter Truth About Promoting Produce To Children, and in that piece we referenced a spirited exchange with Bryan Silbermann, President of PMA, in Pundit sister publication PRODUCE BUSINESS on the subject. The Pundit wrote this:

In the National Cancer Institute’s 5-A-Day for Better Health Program Evaluation Report, the following dilemma was identified: “. . . the potentially undesirable sensory qualities of some vegetables and fruit (e.g., bitterness, sourness, pungency, astringency) may act as significant barriers to the adoption of a diet that is high in vegetables and fruit, especially among children. The dilemma here is that the strong-tasting compounds as a group overlap extensively with the compounds that are potentially protective against cancer; therefore, removing strong-tasting compounds may reduce the protective effect.”

Put another way, all produce is not created equal when it comes to health effects, and the produce items that may be easiest to get people to increase consumption of, namely sweet-tasting fruits, are probably the least valuable health-wise. That is why the USDA’s latest food pyramid for kids urges the consumption of 1 1⁄2 cups of fruit each day and 2 1⁄2 cups of vegetables — 67 percent more vegetables than fruit.

And although marketing is important, it is very doubtful that putting SpongeBob on cauliflower will do much to increase consumption, and having Brussels sprouts in the school vending machines probably won’t make a big difference in eating habits.

Although putting Brussels sprouts in school vending machines is close to pointless, if we can change the flavor profile of Brussels sprouts while making them taste better, we might have a breakthrough in getting children to eat more vegetables. This piece from the Telegraph in the U.K. says things are really happening on this front: 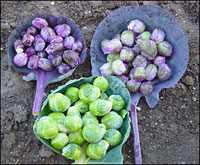 Sprouts are considered to be one of the
healthiest vegetables around.

A growing menu of brighter, sweeter “child-friendly” fruit and vegetables is being created by scientists to tempt children away from less healthy options.

Red Brussels sprouts, with a sweeter flavour and a colour close to that of red cabbage, are the latest in a long line of ever more bizarre varieties that are appearing on supermarket shelves.

By carefully combining different crops, botanists are able to select the traits they feel will be most appealing to youngsters. They hope that these “Fisher Price” varieties can gently introduce children to less appealing fruit and vegetables.

Shops now stock baby carrots bred to be sweeter and packaged in colourful bags, especially for children’s lunch boxes. Some have featured versions in purple, green, yellow, white and black.

Mini-bananas, again ideal for the lunch box, have also recently arrived in the UK, as have mini-cucumbers, bred to be sweeter and less juicy.

Red bananas were launched by Marks & Spencer two years ago, along with the “strawmato”, a strawberry-shaped, super-sweet tomato designed for children.

Dr Ian Puddephat, head of research at the crop developer Syngenta — which came up with the red sprouts, and hopes to have them on supermarket shelves next year — said traditional crops were being altered to suit changing palates.

“As a society, we are now less accepting of bitter flavours,” he said. “So we are trying to breed these out while maintaining all the good qualities about the fruit and vegetables.

“Combining the red-purple colour with the milder-taste attributes, we hope the finished variety will be more appealing to children.”

Sprouts are considered to be one of the healthiest vegetables around, containing four times more vitamin C than an orange.

Professor Janice Thompson, from the department of exercise and nutrition at Bristol University, said that the new varieties helped to introduce children to fruit and vegetables from an early age.

“Children’s tastebuds are much more sensitive than adults’,” she said, “which is why they tend to prefer sweeter tastes. They are also naturally attracted to bright colours.”

But Paul Clerehugh, the celebrity chef who helped Jamie Oliver as a consultant on his school-dinners campaign, said: “I am always wary of anything that has been given a sweet flavour to make children eat food.

“It encourages that sweet tooth in kids. They need to be taught how to appreciate the food without sweet flavours.”

We need to see some studies to make sure the alterations that have changed the color and flavor profile haven’t affected the nutritional content –- but, basically, this is marketing at its most effective: changing the product to meet the demands of the consumer.

If we can do this, increasing consumption of healthy fresh produce will get a lot easier.