Lots To Learn From Foodservice

The produce industry’s premier foodservice event is coming up fast. Perhaps if you are a retailer or vendor who sells to retailers, you don’t think it is relevant to you. Think again. Today, a simple visit to the new Whole Foods in London, which has foodservice seating for 350, tells us a different story about retail:

Upstairs, the simply-named, eating-in floor of the 80,000 sq ft Whole Foods on High Street Kensington, seats 350 which makes it one of the largest café/restaurants to open in London this year irrespective of the two vast floors of food retail beneath it….

As two painters behind him put the finishing touches to the sign above ‘The Barley’, their pub which naturally only sells organic beers, Lannon explained one of the key differences in Whole Foods business model between the UK and the US. One that, surprisingly perhaps, has nothing at all to do with the organic movement.

“The eating-in aspect of this branch of Whole Foods is much more significant than anything we have ever done in the US because of the relative ease of acquiring a liquor licence here rather than in the US where it is difficult in certain states and impossible in others. We simply could not do anything like this back home,” Lannon explained….

As a result, although the initial publicity concentrated on price comparisons between Whole Foods, M&S, Waitrose and Tesco this new store in fact owes more of its inspiration to the more established London department stores where restaurants and cafes sit side by side with their bountiful food halls. Fortnum & Mason’s five restaurants will seat 600 by the autumn; the Fifth Floor at Harvey Nichols seats 450 but both are dwarfed by what must be the biggest restaurant in town, Harrods, where 28 different eating places can accommodate 1,839 shoppers at any one time.

In these settings, both sides, selling and serving food benefit from their proximity. The retail side benefits from the greater volume, and therefore lower unit costs that comes from buying for the kitchens as well, while the chefs, unlike their counterparts in individual restaurants or even hotels, have the benefit of highly professional in-house buyers as their colleagues. In practical terms it can mean that any fruit or vegetables that may not be aesthetically pleasing enough to sell off the shelf can be handed over at the close of the day for tomorrow’s soups or salads and the butchery department can find a home for the sausages and burgers that are invariably left over when a carcass has been stripped of the fillet, ribeyes and rumps which invariably sell first.

In practice, this is often not so easy as the two departments may simply not get on and there is a finite capacity to the stews, casseroles or chowders, made from the less expensive cuts of meat and fish, that can be sold in the summer. But creating as many as possible of these ‘link throughs’ or ‘link sales’, as they are known in the trade, is the key to this type of business according to Dominic Ford, who created the Fifth Floor at Harvey Nicols and plans to launch two new foodmarkets, Food. Inc in west London later this year and Union Market in Islington in 2008….

On the ground floor, between a large wine department (where not all the wines on sale are organic) and their temperature-controlled cheese room is a small wine bar where one can sample the produce from either department. Far more significant, however, in terms of generating sales and the vital synergy between retail and the kitchens, are the three large banks of counters in the middle from which customers can help themselves to a vast array of prepared food…. Upstairs incorporates one large self-service counter which serves pasta, pizza and salads, separate stations for ice-creams, crepes and waffles and a juice bar. But the more distinguished cooking is set around three separate counters which serve shellfish and seafood, dim sum and sushi and a range of Mediterranean small dishes (although in true American fashion the portion sizes tend to be large).

At each of these counters intelligent design allows their relatively inexperienced chefs to deliver pretty good food from the outset as a lot of the preparatory work is obviously done behind the scenes and the cooked food has only to travel a brief distance between the kitchen range and the customer. Ham croquetas and salt cod fritters arrived piping hot while the grilled halloumi had not yet turned to the rubbery consistency it easily acquires from waiting around too long in the kitchen

Put another way, the line between retail and foodservice is rapidly blurring. If Whole Foods in London is one extreme, the new Tesco Fresh & Easy format in the U.S. , expected to be heavy to private-label prepared foods, is just another type of foodservice. It means that PMA’s foodservice conference can be valuable even if just as an intelligence-gathering trip.

Advance registration ends Friday, July 6, so act now. You can get full information on the event here. Look at the schedule here. Get hotel phone numbers here. And register on line right here.

There is one more special opportunity at PMA’s Foodservice Conference. And if you are flying in for the Conference or can’t make the Conference but are in range to play some golf on Friday July 13, 2007, it would be a fine thing to do.

I could tell you it is an excellent networking event and that would be true. Many a business relationship is built or made stronger out on the links at this golf tournament. 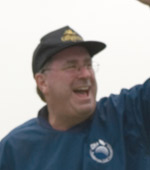 I could tell you that it would be a good time, and that would also be true. Take a look at the photo of Steve Shapiro of Girard’s Salad Dressing at last year’s tournament and tell me he isn’t having a good time.

It is a good cause for a lot of reasons. First, for the industry, we need culinary innovation as much as we need anything if the industry is to advance.

Second, it supports youth, bringing students from the Culinary Institute of America and Johnson & Wales University to this year’s conference.

Third, it supports leadership. Joe was taken from us at his prime, a young man of 40-years-old. Joe never lived to see the launch of the Perishable Pundit, but he would have teased this Pundit no end because we were friends.

It is important that when someone like that is taken from us, we honor their memory, and the best way to honor Joe’s is to come down and play golf.

The Pundit and sister publication, PRODUCE BUSINESS, are sponsors — PRODUCE BUSINESS of the Golfers Lunch and the Pundit of the Fresh Produce Manuals for each of the Nucci Scholarship winners. We wanted to do what we could.

But what will make this golf tournament a fitting tribute to a life filled with innovation for the produce trade is to sell out the golf tournament. There are still places available. Surely we can sell it out.

Bryan Silbermann, President of PMA, and this Pundit stood before countless people, more than the church could hold, as we gave eulogies to Joe’s memory. If only a fraction of those who stood there with us would sign up to play, the tournament would be sold out many times over.

Surely some of those who stood in respect on that day must play golf and surely some could make the time. This would be a fitting gift for a business associate and personal friend who had everything except time.

You can learn about and register for the golf tournament here.