The idea of students coming to get jobs in the industry is fantastic. We need a next generation. But we also value students who are in culinary schools. 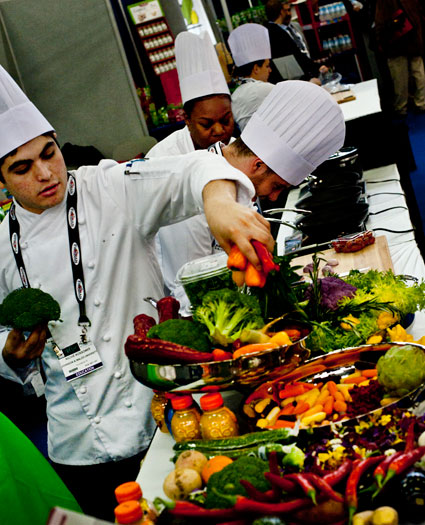 We don’t want them to quit school and start booking loads on some sales desk; we want them to become great chefs and include produce generously in all their recipes.

To help make this happen, we bring in students and faculty from culinary schools. The students forage the trade show floor for ingredients while the faculty and students continuously prepare some great plant-based dishes to give to attendees.

We run special lecture programs for the students. This year, the honorary chairpersons of the program are Jack and Linda Allen. Esteemed academics, we are lucky to have them.

We also bring in a whole group of celebrity chefs – from famed restaurateur David Burke to a local DJ Chef who spins songs while shaking a skillet — to show innovative ways of using produce.  Here is the 2013 chef schedule — what a showing of top chefs:

When Joe was 21 years old, he owned a coffee truck and his own catering company while simultaneously attending the New York Restaurant School.  After graduating in 1992, Joe started an internship at C3 that ended seven years later when he was working as the Sous Chef.  In 2000 Joe went to work at Home Restaurant where he met fellow Rosa Mexicano chef David Suarez.

After three years of working summers on Fire Island at Tequila Jacks and the off-season at Home, Joe took a position as Line Supervisor with Rebecca Charles at Pearl, where he was able to learn the skill-set needed to run a kitchen.  While at Terrence Brennan’s Seafood and Chophouse in the Benjamin Hotel in 2004, the restaurant closed only to reopen as Ocean 50, where Joe was named opening Executive Chef.

Joe then joined Rosa Mexicano as the Executive Chef of Lincoln Center in 2005 and was promoted in 2011 to Regional Executive Sous Chef.  Joe continues to enjoy being part of an expanding brand that now holds a national presence.  When Joe is not at Rosa Mexicano, he is cooking at home with his twin daughters, Jalissa and Ashley, or following the Yankees as a proud, loyal fan.

“The Chef That Rocks!’ is the only entertainer who simultaneously cooks and DJ’s for special events worldwide and is Food Network’s Cutthroat Kitchen Champion.

His recipe is simple: Spin the hottest music while mixing up some delectable gourmet dishes. Throw in some celebrity soirees along with a TV pilot and add some buzz. For nearly 10 years, DJ Chef  Marc Weiss has been hitting up a scene that has never been tapped.

While his experience and determination have guided him to the top of his game, Marc has been hailed as a pioneer and innovator for successfully fusing his two passions and becoming a national crowd-pleasing culinary entertainer. He recently won Food Network’s new competition show hosted by Alton Brown “Cutthroat Kitchen” and  co-hosted the World Food Championship in Las Vegas with Man vs Food‘s Adam Richman.

While food and  cooking have always been Marc’s forefront, as a teen he began making his hobby into a reality. Marc began deejaying at house parties when he was just 16. A couple years later he additionally took on a job as a prep cook. After high school, Marc attended the New York Restaurant School in New York City. After earning his toque, he went on to work with star chefs Bobby Flay, Matthew Kenney and John Tesar and in fine kitchens throughout the city.

Marc found his culinary groove and returned to Long Island to cook at some of the hottest restaurants around. His success as a  noted chef was becoming a reality within local media outlets like News 12, Newsday, and The New York Times, and Marc began hosting and catering private parties during that time. More and more, people began socializing in the kitchen with him and asking him culinary questions.

Raised in Brussels, Chef Alain realized he wanted to become a chef at age 11 after spending many years assisting one of his beloved aunts in her kitchen. He graduated with distinction from Belgium’s Centre d’Etudes des Industries Alimentaires et du Touisme, and has won numerous awards throughout his culinary career.

He’s worked as chef-instructor of the Escoffier Restaurant at the Culinary Institute of America, and counts André Daguin, Georges Blanc, and Remy Jacxsens among his most influential mentors.

He advises aspiring chefs to work the trenches first, to never stop learning, and to “look the part, act the part, be the part!” Chef Alain joined The International Culinary Center in 2010.

David Burke’s fascination with ingredients and the art of the meal has fueled a 30-year career. He graduated from the Culinary Institute of America and traveled to France where he completed several stages with notable chefs. His mastery of French culinary technique was confirmed when, at age 26, he won France’s coveted Meilleurs Ouvriers de France Diplome d’Honneur for unparalleled skill and creativity with his native cuisine.

Burke returned to the U.S. as a sous chef at La Cremaillere and then at The River Café, where he ascended to executive chef and earned three stars from The New York Times. In 1992, Burke partnered in the opening of the Park Avenue Café. He has been honored with numerous awards and recognitions including Japan’s Nippon Award of Excellence, the Robert Mondovi Award of Excellence and the CIA’s August Escoffier Award.

In 2013, the David Burke Group was recognized by Restaurant Hospitality magazine as having one of the ‘Coolest Multi-concept Companies in the Land.’ The article cites the numerous incarnations of Chef Burke’s creative vision, from David Burke Townhouse to David Burke Fishtail, from Burke in the Box to David Burke’s Primehouse. Burke’s visibility as a celebrity chef has led to consultant positions with hotels, cruise lines and food experts. Burke will consult for Holland America Line Culinary Council on the cruise line’s culinary initiatives, including the Culinary Arts Center enrichment program, and provide signature recipes which will be featured on all 15 ships.

Once again, the chef demos are included with your registration for The New York Produce Show and Conference. So come and see culinary expertise applied to produce and make sure you are registered right here.