“Be not afraid of greatness: some are born great, some achieve greatness and some have greatness thrust upon them”.

The title, Twelfth Night, is most commonly thought to be a reference to Epiphany — the twelfth night of Christmas. At the time Shakespeare was writing, the Epiphany was celebrated by turning everything upside down. The specific reference is probably to the upside-down, chaotic world of the Kingdom of Illyria, the location of the play. Though as we listened to Lorri Koster, Vice-President of Marketing and Co-Chairman of the Board at Mann Packing, accepting her honor at having been asked to speak at the annual United Fresh Reception Honoring Women in Produce, we thought it a reference to the way a life can be turned upside down by circumstances.

DeeDee and Gina, Lorri’s sisters, stood like sentinels supporting Lorri as she spoke, and Gina gamely tried to wipe the tears from her eyes as Lorri recounted the tale that brought her to this place. It was like a Shakespearean tragedy, the death of her only brother, Joe, like the fall of the young anointed prince… The passing of her father, Don, so soon thereafter, like the loss of a sage and great King, perhaps broken-hearted still at the death of his son.

She was nervous as she spoke, how could she not be? What message could she possibly say, what journey could she recount, that would not, in the end, have the same unspoken subtext: “Say what you will about achievement, yearn all you might for glory, but I would have given all for a simpler life: working to satisfaction, caring for my sons and loving my husband.”

Each year a speaker is chosen and, each year, there is a powerful story. This year the story was tinged by tragedy and powered by obligation. Lorri was dressed elegantly, an understated St. John-style jacket with a jeweled collar to add style, yet one imagined her, like in some Civil War epic, gathering her body and soul after the burning of the plantation, pulling her tattered shawl over her shoulders and, rising, head erect, vowing to do what must be done.

Greatness is sometimes associated in the public mind with grandiosity, but this is a false understanding. Lorri’s life has been inspirational because it speaks to the reservoirs of human potential that we all hold within us. Her greatness is the quiet heroism of the necessary. 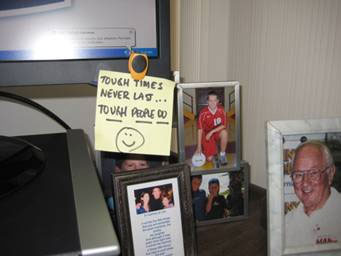 She does not even realize how exceptional she is. She spoke off-handedly about her obligations as the eldest daughter, following the passing of her brother and father, not realizing that many would reject that birthright and the obligations that come with it. She does not believe there was another choice; to shirk her responsibilities is simply not in her vocabulary.

Lorri worked for this Pundit for a time and she was kind enough to mention the training she received in her speech. Yet the way Lorri has lived her life has taught this Pundit, and all who are willing to see, a lesson in the essential nature of human potential more valuable that any training program. Her comportment has been an example of dignity brought live.

As her sisters applauded, and the crowd cheered, we surveyed the room and thought, just for a moment, we thought we saw Joe and Don applauding as well. Maybe it was just our imagination, or maybe not. But we know they would want to applaud. A life well lived has earned the applause.

Many congratulations to Lorri Koster on occasion of her receipt of this honor.