Lessons On Marketing From Oprah: You Too Can Sell Five Pounds Of Blueberries For $70

So, Oprah Winfrey has long issued a Holiday Favorite Things list. This year there is a produce item, albeit frozen, on the list:

My new definition of everyday luxury: a five-pound box of organic wild blueberries frozen within 24 hours of harvest from Josh Pond Farm in Maine. Add them to yogurt, pancakes, or salads, or turn them into sorbet, because (1) wild blueberries are sky-high in antioxidants and (2) they’re zero Weight Watchers points! – Oprah

We find it interesting in several aspects:

First, it is an example of how luxury can be redefined. The produce industry is often way too focused on reducing price rather than increasing perception of value.  Of course, this is a different market than the Mom at Walmart scrambling to feed the kids. It is a market, nonetheless, and other venues, such as Harry & David (roughly $10 a pound of pears for 4 lbs plus $10.99 shipping to Florida), are in the market.

Pricing is actually very interesting in this category. If you buy through the Amazon link that Oprah promotes, the cost is $70, plus $4.99 shipping: 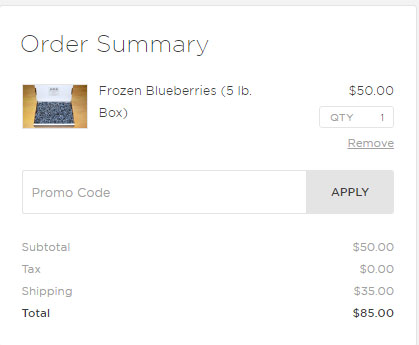 Second, for both good and bad, it raises the importance of marketing. Note that Oprah, who is an investor and spokesperson for Weight Watchers, mentions that they a zero on the Weight Watchers program, which means people following the program may eat all they wish of this product. This is a powerful marketing tool to woo people who are depriving themselves of foods they would like to eat in order to lose weight. But most fruits and vegetables are zeros on Weight Watchers, and on packaging and in-store, there is very little marketing to followers of Weight Watchers or other diets. Although the data is weak, it appears that many tens of millions of Americans, maybe more, are on diets at any given time. So, tying into specific diets, as opposed to just general healthfulness, probably has an upside.

The other interesting thing is how words, such as organic and antioxidant, have become kind of slogans for “good for you.” The truth is that the actual evidence the antioxidants in cultivated blueberries are somehow inadequate and that people need to eat wild blueberries to get more antioxidants is non-existent.

Indeed, it is not clear that more antioxidants are always a good thing. Scientific American ran a piece titled Antioxidants May Make Cancer Worse that pointed out:

Antioxidants are supposed to keep your cells healthy. That is why millions of people gobble supplements like vitamin E and beta-carotene each year. Today, however, a new study adds to a growing body of research suggesting these supplements actually have a harmful effect in one serious disease: cancer.

The work, conducted in mice, shows that antioxidants can change cells in ways that fuel the spread of malignant melanoma—the most serious skin cancer—to different parts of the body. The progression makes the disease even more deadly. Earlier studies of antioxidant supplement use by people have also hinted at a cancer-promoting effect. A large trial reported in 1994 that daily megadoses of the antioxidant beta-carotene increased the risk of lung cancer in male smokers by 18 percent and a 1996 trial was stopped early after researchers discovered that high-dose beta-carotene and retinol, another form of vitamin A, increased lung cancer risk by 28 percent in smokers and workers exposed to asbestos. More recently, a 2011 trial involving more than 35,500 men over 50 found that large doses of vitamin E increased the risk of prostate cancer by 17 percent. These findings had puzzled researchers because the conventional wisdom is that antioxidants should lower cancer risk by neutralizing cell-damaging, cancer-causing free radicals.

But scientists now think that antioxidants, at high enough levels, also protect cancer cells from these same free radicals. “There now exists a sizable quantity of data suggesting that antioxidants can help cancer cells much like they help normal cells,” says Zachary Schafer, a biologist at the University of Notre Dame, who was not involved in the new study. Last year the scientists behind the melanoma study found that antioxidants fuel the growth of another type of malignancy, lung cancer.

Now there are so many caveats. Notably — antioxidants consumed via food are not likely to be consumed in doses that would cause these effects.  And there is the whole issue of weighing the positive impacts of reducing free radicals versus the negative.

Yet Oprah feels free to suggest this antioxidant boost as a reason for purchase.  Unsupported as this may be, the very effectiveness of this annual list points to a key fact. Today, a nod from an appropriate party, such as Oprah, lets people avoid thinking. It is a kind of shortcut that, among her admirers, makes them feel the product has been vetted and thus makes the purchase lower risk. Perhaps President Obama became President because of this effect when she was an early endorser.

So, we have market segmentation in several ways:

2. There is a branding market, where words such as organic and antioxidant and wild function much as brands would.

3. There is the use of reputational heft such as Orpah’s to simplify decision-making.

How many produce sellers –at shipper-level or at retail –have really thought through all this and have set up their own marketing efforts to utilize all the tools available, indeed required, to maximize sales and profits?