The very last Kash n’ Karry has closed and the sign has gone up for a new Sweetbay. The heritage goes back to 1914 and the Kash n’ Karry banner, back in 1962, pioneered something approaching Every Day Low Pricies (EDLP) by eschewing trade stamps and whatnot. 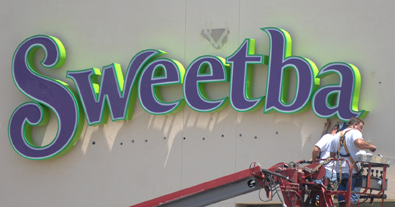 The chain was once owned by Lucky Stores in California, and a chunk of the stores were Kroger’s old Florida Choice division.

There was a bankruptcy, a public offering and, finally, an acquisition by Delhaize. Then, in November 2004, the first Sweetbay opened:

In early 2004, Kash n’ Karry, the Florida-based supermarket company of Delhaize Group, announced the creation of a brand new supermarket concept in Florida. Developed from research in core markets, Sweetbay Supermarket intends to reinvigorate the marketplace and provide Floridians with a vibrant, exciting and diverse place for their shopping needs.

The Sweetbay Magnolia (Magnolia Virginiana) is the literal inspiration for our name. With its fragrant white blossoms and brilliant red berries, the beautiful Sweetbay vividly reflects our passion for delicious food. Common to West Central Florida, the Sweetbay grows tall and strong, echoing the strength of our stores and associates.

The doors of the first Sweetbay store opened in November 2004. The Sweetbay shopping experience is unlike any grocery store in Florida (or the world for that matter). It’s all about food, glorious food — variety, quality, freshness and flavor!

Sweetbay associates are not only passionate about food, they’re extremely knowledgeable — with an insatiable appetite to learn more.

Pundit sister publication, PRODUCE BUSINESS, went to visit an early Sweetbay and you can read the article here.

Now Sweetbay announces the end of an era…and the beginning of a new one:

TAMPA, Fla. (August, 29, 2007) — Kash n’ Karry is saying goodbye after more than 50 years in the Florida marketplace. Today marks the end of a 3-year transformation of one of Florida’s oldest grocery store chains, as the final Kash n’ Karry store, located in Crystal River closes and Sweetbay Supermarket, the Florida-based supermarket company of Delhaize Group, opens its doors to the community.

“Kash n’ Karry at one time was a strong brand and served as a pillar for the Tampa Bay community,” said Shelley Broader, president and chief executive officer of Sweetbay Supermarket. “We wanted to treat Kash n’ Karry with respect and retire the company gracefully, and I am very proud that we have.”

“These were exhausting and exhilarating years of transition and we couldn’t have done it without the dedication and resiliency of our entire team.” Broader said.

Kash n’ Karry began in 1914 when Italian immigrant Salvatore Greco bought an old horse and wagon and began selling fruits and vegetables in the streets of Tampa. The Kash n’ Karry name was adopted in 1962, and by 1970 the chain had grown to 48 stores. By 1973 it expanded into 11 counties and a distribution center was opened in Tampa in 1976. By 1989 the supermarket had 97 locations and more than 8,200 associates with annual sales exceeding $900 million. In 2001 Kash n’ Karry joined the Delhaize Group. In 2004, the company announced the creation of a brand new supermarket concept in Florida. Sweetbay Supermaket was developed from extensive customer research in core markets to reinvigorate the overall marketplace and provide Floridians with a vibrant, exciting and diverse place for their shopping needs.

The first Sweetbay Supermarket opened its doors in Seminole in November 2004, with Ft. Myers and Naples opening stores shortly thereafter. The brand was so well received during the first two years that the supermarket accelerated store openings by one year, transforming 92 Kash n’ Karry stores in three years. Today, there are 101 Sweetbay stores, with three more brand new scheduled to open by the end of this year.

“The conversion of the last Kash n’ Karry store is only the end of the beginning, and now our single focus is building a really successful regional supermarket chain. Broader said. “All of our effort and energy is now focused on improving and growing Sweetbay.”

The Kash n’ Karry stores Delhaize purchased were mostly so bad that Sweetbay clearly benefited simply by the comparison. And Sweetbay benefits from being in a market where the pickings are thin beyond Wal-Mart and Publix. Yet, even on its own terms, the Sweetbay concept is very appealing.

The offerings are very fresh, a lot of foodservice, very foodie-oriented — yet with prices that are competitive with any conventional supermarket.

Concept is crucial, of course, and Sweetbay believes it has found an epicurean niche in the business. Yet execution is also crucial, especially with a concept that is looking to offer so many things often identified as upscale — but at a competitive price point. 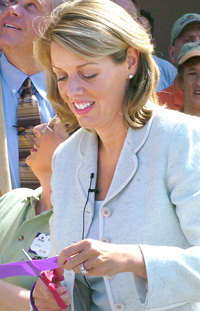 The executive team is crucial. And Shelley Broader, president and CEO of Sweetbay Supermarket, has the reputation of a phenom, with many people certain she will go very far, very fast.

The Pundit has been explicitly asked if Delhaize would ever appoint an American woman as CEO. And best of all, she is from the perishable world, having served as Vice President of Perishable Merchandising for Hannaford, Sweetbay’s sister division.

One suspects that this background is part of the key to Sweetbay’s success. For many years now, it has been recognized that fresh food and floral are crucial in differentiating stores, yet supermarket CEOs have come predominantly from grocery, front-end or accounting.

Maybe it is time for a change.

Delhaize reports substantial sales increases when each Kash n’ Karry is converted to a Sweetbay. Although some of that is offset by higher expenses, especially more labor, it is still a big win for Delhaize. That is the good news.

The bad news, of course, is that the “easy money” is now off the table. Comparisons to last year will be more difficult, and competitors, particularly Publix, are starting to respond more effectively.

Yet all this is a problem for another day. For the moment it is time to celebrate. Delhaize took a tired old chain and turned it into a beautiful fresh concept that almost everyone would like in their neighborhood. That is a substantial accomplishment.

Many congratulations to the Sweetbay team.