The Pundit family spent last weekend at Walt Disney World attending Mickey’s Very Merry Christmas Party. We split up at one point and the Pundit was with Junior Pundit Primo, aka William, age nine. It was 11:32 pm and, though tired, he very much wanted to take a photo with Winnie the Pooh in his Christmas outfit. Alas, we had gone to City Hall where he had stood the previous year, but this year we were told he was by the Winnie-the-Pooh ride on the other end of the park.

The park, however, was to close at midnight and the characters go in half an hour before it closes. So at 11:32 they were already gone or, certainly, they had ended the line. The cast member explained this all to William, who already knew the rules and still listened politely. Then when Dad suggested that since it didn’t look like Winnie-the-Pooh was going to happen we find a last ride or show to catch before the close, William turned and pronounced: “C’mon Dad, we are at Disney. Why don’t we make a little magic happen? If we cross our fingers, run as fast as we can and say “dreams come true” as we run — I bet we can get a picture with Christmas Winnie-the-Pooh.”

Perhaps a better father would have used the moment to disabuse the child of such foolish fantasies. He would have explained that there is no magic and dreams come true from hard work not finger-crossing and mindless repetition.

This father, however, just couldn’t bring himself to burst this particular bubble and so, at high gallop we traversed the park with fingers crossed as we both chanted “Dreams Come True” for all around us to hear.

At the Pooh ride we were told the characters could be found at the entrance to Toon Town but were probably in for the night. Yet we ran forward, fingers still crossed and still chanting about dreams coming true and then at 11:52, in contravention to all we knew about Disney policy, there was Pooh and Piglet, in their Christmas scarves still poising for pictures.

William, certain he had made some magic happen, just grinned, and the photo was snapped. A little Christmas miracle to take home with us. 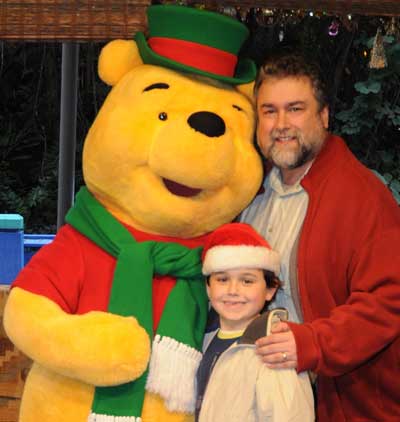 It is all silly, of course. Rational as we are, we know that the intensity of our belief, the crossing of our fingers and the chanting out loud didn’t keep those characters out late. We just got lucky.

Yet that is not completely true. For only one who believed so intently in one’s ability to change reality would have bothered to run at all. And if we hadn’t run, we wouldn’t have been in a place to take advantage of what was happening that night.

William comes from a long line of entrepreneurs, and with Christmas beckoning, well, maybe in his actions he tapped into that entrepreneurial vein and, in his own way, reminded us that very often it is those who believe they can accomplish great things who find themselves at the place where they can seize opportunities.

After all, it may have been a small dream, but the point was clear. Attempting something doesn’t mean the dream will come true, but not attempting it guarantees it won’t.

There is a line in the Oscar & Hammerstein musical, The King and I, that says: “If you become a teacher, by your pupils you’ll be taught.” — same with being a parent.

Merry Christmas and a Happy New Year to all!