It’s OK To Play With Food

We have always thought the marketers behind Arm & Hammer Baking Soda to be the greatest marketers of all time.

We suppose baking soda is used in some way for baking but we confess that the Pundit household has bought hundreds of boxes of Arm & Hammer Baking Soda and never used it in any baking.

Instead we have been persuaded by the marketing people who promote Arm & Hammer that it is a good idea for us to buy boxes of their product, leave them open in our refrigerator, then throw them in the garbage.

Not only that but to do it continuously, every three months, forever.

Well, a U.K.-based organization called The Fresh Prepared Salads Producer Group has struck upon a similar concept, encouraging children to play with their food:

CHILDREN TOLD: IT’S OK TO PLAY WITH YOUR FOOD

British salad producers are taking up the challenge to get children to eat their greens by launching a Salad Bag Art competition, an idea developed after new research showed that 46% of parents play games at meal times to encourage their children to eat more healthily. 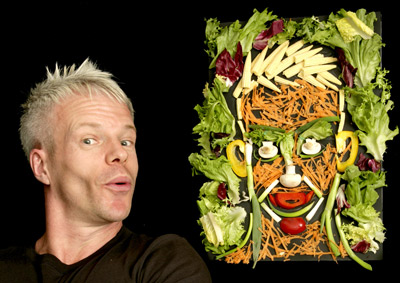 The GfK research, commissioned by The Fresh Prepared Salads Producer Group, shows that children continue to be resistant to eating their greens: 34% of parents said their children don’t like salad and 29% dislike vegetables. Other turn offs for kids are: meat (24%), fruit (20%) and milk (19%); the survey also reports that nearly a quarter (23%) of under 16s rarely or never try new foods. But the solution to getting children to eat healthily may not require millions of pounds of government funding. Instead, by allowing children to become familiar with food through play, they are more likely to try new and different ingredients.

The study revealed that 38% of parents said they found making a picture with food really helps their children eat at meal times, so British salad growers are launching a competition to find the UK’s best Salad Bag Artist. Youngsters are being invited to create a work of art from salad bag leaves and other salad vegetables with the chance of winning a place on a fabulous cookery course and a weekend in London for all the family.

To get the ball rolling and inspire youngsters to give Salad Bag Art a go, children’s TV presenter Mark Speight has created a self-portrait out of bagged salad leaves and other vegetables, while Carola Weymouth, founder of children’s cookery school Cookie Crumbles, designed a healthy handbag and a ship.

Mark commented: “I had so much fun creating my self-portrait but perhaps the best bit about Salad Art is that you can eat your picture after you’ve made it. So why don’t you get creative with salad and see what you can pull out of the bag!”

Mark and Carola’s creations plus all the details of the competition can be found at www.bringonthesalads.com.

Carola, who has taught over 10,000 children to cook, commented: “It’s clear that parents still struggle to get their children to eat their greens but parents are reporting that familiarizing techniques such as creating pictures and getting children involved in food preparation really do help conquer their resistance to trying new or previously disliked foods. This competition gives parents and children an ideal opportunity to familiarize themselves with salad ingredients and using a bagged salad will provide a variety of shapes, textures and flavours for children to enjoy.”

This group is composed of six large fresh-cut salad producers:

Pundit readers will recall that we did a piece on Florette here.

What’s interesting about this particular contest is that it is justified with consumer research in the U.K. finding many parents report that by playing with their children by, for example, making a smiley face out of the food, parents can get children to eat.

We confess that the Pundit once tried to make an airplane with the baby food to feed the eldest Junior Pundit but was harshly criticized by Momma Pundit, with a warning that if we got the Junior Pundit Primo accustomed to such play, he would never eat without a performance.

Be that as it may, we found the research interesting, noting that parents with children as old as 14 to 16 reported that 30% of the children did not enjoy salad, 29% did not enjoy vegetables and 19% do not even enjoy fruit!

We wonder if this pattern has been confirmed in other research. It might give us an idea of a focus that could be helpful in boosting consumption.

In any case, the contest at hand is designed to get children to make artwork with their food. Whether it will actually get children to eat more is an unanswered question. But if everyone makes designs with their foods and does it in accordance with the contest rules — the main ingredient of your salad art must be salad leaves taken from a salad bag — they will certainly buy many more bags of salad. With a tip of the hat to Arm & Hammer, it is shear marketing genius.