In Memory Of Craig Carson

Just over a month ago, the Pundit was sharing with Craig Carson what we knew about cancer and seeing if there was a way the knowledge we acquired in fighting to help the Pundit’s father could help Craig.

So we were shocked when we received a note from Tony Freytag: 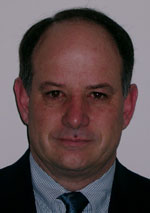 Cashmere, Washington; March 22, 2007 — Craig Carson, 51, a founder, owner and General Manager of Crunch Pak Sliced Apples, passed away today after a short illness. The Crunch Pak staff and the entire community are saddened to learn of his passing. He was instrumental in the innovation and development of the sliced apple business as well as a leader in many other agricultural areas.

Just six years ago Crunch Pak was started with the goal to make sliced apples a permanent staple of the produce aisle. The company now employs approximately 200 people in their Cashmere facility with a vision of continued growth. Today, thousands of retail stores across the country distribute Crunch Pak’s apples under its own brand as well as Earthbound Farm Organic and Disney Garden. The apple industry, the community and his co-workers will miss him.

Across the country, Jim Allen, president of the New York Apple Association, sent his thoughts:

I want to remember a friend. Craig Carson of Crunch Pak, Cashmire, WA, passed away on March 22 at age of 51. Craig was a founder and co-owner of Crunch Pak, perhaps the leading supplier of fresh sliced apples to retailers across the country.

I had the pleasure of working with Craig on the United Fresh Produce Association Membership committee, and while we both represented apple industries on opposite sides of the country, we both appreciated and respected the issues facing our industries. He was true friend and he will be missed. I express my deepest condolences to Craig’s family, co-workers and friends.