The Pundit had the great pleasure recently of flying out to Oxnard, California, to be part of the festivities surrounding the launch of a new Advanced Energy Recovery System at Gills Onions.

At least that was the nominal purpose of the event. In reality it was a celebration of sustainability done right and, indeed, a celebration of the value of being the “man in the arena” and testimony to the fact that in doing the work that needs to be done, one can be offered opportunities undreamt of and often obscured by an unknowable future.

This was a big project, an almost ten-million-dollar technological marvel that takes most of the waste generated from peeling onions and uses it to generate electricity. Significantly the waste is not burned but, instead, mostly converted to onion juice which is then converted into methane gas which, after conditioning, is used to generate electricity in high-efficiency fuel cells.

It is a marvel to behold, and the technical wizardry attracted most of the attention, but the truth is that what Gills Onions provided is an example for the industry, indeed an example for the world, not just of a scientific and engineering achievement but also, and with more long term significance, a model path by which companies ought to engage with sustainability. 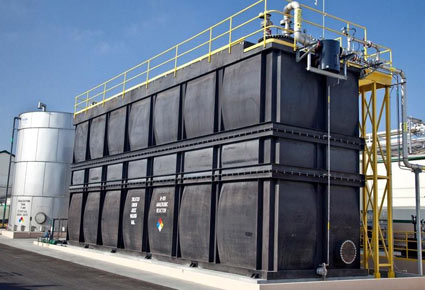 Anaerobic digester — utilizes a series of processes in which microorganisms in the absence of oxygen break down onion waste and produce a methane- and carbon dioxide-rich biogas suitable for energy production.

Fuel Cell Stack Module is the centerpiece of the power plant and is comprised of multiple fuel cells operating in parallel. Hydrogen is internally reformed for the source fuel to support the NON COMBUSTION electrochemical reaction in the fuel cell. Fuel is combined with oxygen from air to produce energy. Ultra clean electrical power, in the form of direct current (DC), and heat are produced in the process.

Most of the time, producers get involved in sustainability somewhat reluctantly, often pushed into sustainability by a customer. The process becomes very negative, constantly focused on doing less of a bad thing at the behest of outsiders.

Yet all one had to do at this event was listen to Nikki Rodoni (see photo left) — Gills’ longtime Sustainability Coordinator and daughter of Steve Gill, who won her “Director” spurs with this new project — and one realized that Gills had walked a different path.

Nikki was beaming, as was her father, her Uncle, David Gill, her sister, Nelia Alamo, as was the whole Gill family and the whole team of associates at Gills Onions. This was because they didn’t do this energy project under duress; they did it because it was so compelling. In that singular fact, one saw that sustainability, done well, can drive an organization to new heights of achievement.

Of course, seizing compelling opportunities is in the DNA of Gills Onions. Here is how they explain the founding of the company and its connection to this new waste disposal solution:

“Disposing of onion waste, one of the biggest challenges Gills Onions faces today, is ironically one of the major reasons why the company began 25 years ago.

La Victoria Salsa approached David and Steven Gill, who were growing peppers for the popular salsa brand, and asked if they could provide whole onions that were already peeled. At the time La Victoria was using dehydrated onions and always wanted to use fresh. They didn’t want to deal with peeling the onions and managing the waste. La Victoria’s problem became Gills’ opportunity and Gills Onions was launched. Since then Gills has grown into the nation’s largest fresh-cut onion processor. Its waste has grown along with it; up to 300,000 lbs. of waste per day.”

Coordinating the project was quite a task. There was a roster of technical innovations — after all, nobody actually knew much about the properties of “onion gas” — but the financial wizardry necessary to make the project viable was no less impressive.

This was a pioneering project and a roster of programs have been created to make it feasible for companies to pioneer new technology. Gills was able to secure a check from Southern California Gas “Self-Generation Incentive Program” for $2.7 million (see photo above). The California Energy Commission gave a grant for $499,000, and Gills can access a $1.8 million investment tax credit. This reduced the effective cost of the project from $9.5 million to $4,501,000.

With annual savings from the project estimated at $700,000 in electricity and $400,000 that would have otherwise been paid to dispose of the waste in the fields, the project should provide an annual return on investment in excess of 20%. — although only time will tell what the time frame will be under which such a set-up needs to be depreciated. This calculation also assumes a company pays enough taxes to use the investment tax credit.

Equally important, the project substantially reduces uncertainty for Gills. Issues such as what will electricity cost in the future and whether there will be restrictions on how Gills can dispose of waste in the fields are no longer variables to the same extent they were before.

There are plans for the future. Currently about 25% of the onion waste is compressed, chopped and sold as high value cattle feed while the other 75% is onion juice and goes to make the biogas and, ultimately, the electricity. Future plans include getting into the neutraceutical business by extracting the polyphenols and selling these as anti-oxidant supplements for humans. Efforts are also planned to reuse water and to store energy so it can be used when needed.

It is easy to get wowed by the technology and, in fact, some believe that small fuel cells may one day fuel everything from cars to individual homes and businesses. Still, it is unlikely that most produce companies need their own Advanced Energy Recovery System. This is, however, beside the point.

Every company has to face its own challenges, grasp its own opportunities, build its own future.

There is much to learn from the entrepreneurial attitude that prevails at Gills Onions, from accepting a client’s challenge to peel onions, to building this energy marvel. This is an organization that seizes opportunities and understands that sustainability, properly understood, is not about stasis; it is about progress.

It is a thought process that is an example for us all.

Many thanks to Steven and David Gill and all the folks at Gills Onions for laying out a path that many will come to follow. Sharing so much, so publicly, is a service to the industry… and the world.