They’ve been very active growing in the Disney Garden. This is the project focused on increasing fresh fruit and vegetable consumption among children by utilizing Disney characters. We’ve dealt with the project and Imagination Farms, the non-transactional produce company set up to facilitate the enterprise, many times including here, where we pointed out that the Pundit went back a long way with Matthew Caito, one of the founders of the venture.

The Pundit and his family also go back a long way with the Kopke family, as we both were pioneers in the Chilean deal, and so we were especially interested when it was announced that William H. Kopke Jr., Inc, would be marketing Chilean grapes under the Disney Garden label during the next Chilean season.

This was quickly followed by word that Six L’s/Custom Pak would use the Disney Garden label on grape tomatoes, cherry-on-the-vine tomatoes and round tomatoes. Plus Custom Pak would join with another Imagination Farms licensee, Progresso Produce, to ship seedless and personal size watermelons from the states of Florida, North Carolina and South Carolina.

Then came word that Disney Garden and the Produce for Better Health Foundation had formed a strategic alliance based on their mutual commitment to increase consumption of fruits and vegetables:

Beyond traditional financial support, Imagination Farms has made a four-year commitment to provide direct marketing support to include further development of the kids section of the Produce for Better Health Foundation website with Disney character integration and implementing a seasonal promotion program tied to a movie or video release to drive additional excitement and enthusiasm around the Fruits & Veggies — More MattersTM brand. Additionally, Imagination Farms has committed to using the Fruits & Veggies More Matters logo on all packaging and serving on the PBH Board of Directors.

…this alliance will leverage the marketing expertise of both organizations and the brand power of Disney Gardentm and Fruits & Veggies — More Matters to develop comprehensive marketing programs that reach moms and children through a variety of packaging, consumer media and in-store promotions. 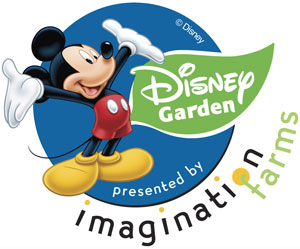 Finally comes word that Disney is showing a real depth of commitment to the Disney Garden project by having Disney Studios partner with Imagination Farms to promote a new Pixar movie, Ratatouille:

Imagination Farms has partnered with Disney Studios to promote Disney’s new Pixar movie Ratatouille (rat-a-too-ee). The movie will premiere on June 29th and Imagination Farms will offer a comprehensive marketing promotion that will run May through September.

The Ratatouille promotion, available to all U.S. retailers, will include special movie-themed packaging, a “Cook & Win” internet sweepstakes with a culinary prize package and POS support centered on the key themes of the movie that revolve around the topic of cooking.

Melinda Goodman, Director of Marketing for Imagination Farms, commented, “The opportunity to partner with Disney Studios on this family movie, focused on cooking, was a natural tie to our mission of increasing consumption of fruits and vegetables among children. Pixar’s track record in animated films and the film’s focus of gourmet foods and cooking make this an exciting promotional venue for us.”

Products available with special Ratatouille packaging will include Washington grown apples from Chelan and L&M, bananas and pineapples from Turbana, blueberries and stonefruit from Ito Packaging, grapes from Four Star Produce, mushrooms from Modern Mushroom, potatoes from Progressive Marketing, tomatoes from Six L’s/Custom Pak, and watermelons from Progreso Produce and Custom Pak.

In addition to the marketing support provided by Imagination Farms, Disney will be providing $25 million in ancillary marketing support to promote the release of the movie creating high consumer awareness. “Disney’s promotional support of Ratatouille this year is similar to the support of the movie Cars in 2006. Ratatouille will be top of mind for consumers throughout the summer, especially families with young children,” noted Goodman. “In addition, the power of Pixar over the last several years has yielded over $4 billion in box office sales and the release of 7 feature length films including classics like Toy Story, Finding Nemo, Cars and more,” replied Goodman.

Disney’s movie strategy of family fun for adults and children and aspirational messaging clearly comes through in this new animated film. Remy is a country rat that dreams of becoming a French chef. He moves his family to Paris so he has access to French “cuisine.” He and his family take up residence under the restaurant of his hero Chef Gusteau. There Remy helps a dishwasher, Linguini, create acclaimed dishes loved by critics…most importantly a vegetable ratatouille dish.

To tie into the movie theme of cooking, Imagination Farms is preparing an online sweepstakes that will be promoted through their website and through special Ratatouille themed packaging and POS. Remy & Linguni will help kids play a match game by selecting matching pairs to make a healthy salad. The promotional prize package includes a family trip for four to NYC to take part in cooking lessons from a celebrity chef at the French Culinary Institute, along with opportunities to attend a Broadway show, goodie bags of cooking supplies and more. 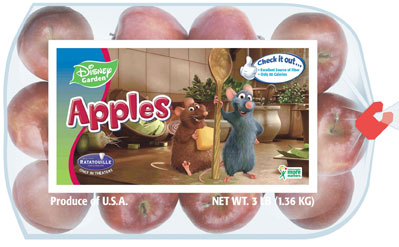 Glen Reynolds, East Coast Sales Manager for Imagination Farms, finished by saying, “Summer is a great time for families, movies and produce. The timing of this movie event can give retailers a great opportunity to build large Ratatouille themed displays that excite kids and encourage purchases that keep summer sales fresh. We feel this is one of the first times a movie promotion has been tied in with so many different produce items for a truly comprehensive promotion.”

Don Goodwin — the other founder of this venture along with Matthew Caito — must think he died and went to heaven. After pioneering the non-transactional produce company model with Green Giant Fresh, which provided little support as it never recognized the value of the halo effect its canned and frozen items could gain from an effective fresh program, he suddenly finds himself with the opportunity to tie in with PBH, with movies and a lot more coming.

Ratatouille (prounounced for the movie with an emphasis on rat) is the story of pursuing one’s passions against enormous odds, and Don Goodwin has done that. He should be pretty proud of where he has wound up.