We’ve had numerous discussions of the problems the earthquake has caused in Peru. We started out with Earthquake In Peru Prompts Appeal For Help To Farm Workers There, which was followed by Pundit’s Mailbag — Tents Needed In Peru.

These pieces have discussed the humanitarian crisis in Peru, the status of the produce industry post-earthquake and discussed what, if anything, is the appropriate industry response to such a crisis.

While our focus has been on Peru, other places hit by natural disasters have also been suffering, including countries that produce substantial quantities of Caribbean bananas that mostly went to Europe. Of course, we live in a world market, and if Europeans can’t get bananas from their traditional supply sources, it has implications for pricing and for American banana vendors.

We’ve typically discussed the Caribbean banana trade in reference to Fairtrade — the movement to pay a “social premium” to growers in one place. Sainsbury’s in the UK is 100% Fairtrade on bananas, and many of those come from St. Lucia and Dominica, both hard hit by Hurricane Dean.

Our discussion on Fairtrade has included articles, such as Sainsbury’s Commits To Fairtrade But Is It Fair For Everybody, Fairtrade’s Unfairness, and a piece built around a letter from Richard Yudin of Fyffes Tropical Produce that addressed an article we wrote about European preferences for importing bananas from certain countries, including the Caribbean.

Our original piece was entitled, Banana Import Policies In Europe Defy Logic And Ultimately Hurt Consumers, and we argued against such preferences, while Mr.Yudin’s letter, published in Pundit’s Mailbag — Fairtrade And Harsh Capitalism pointed out that a lack of banana revenue had unhappy consequences for these islands: “ It is sad to hear that international donor bodies are now discussing poverty-alleviation schemes for these island states which once were very pleasant places to live in, thanks to their steady flow of banana income.”

Now, in the aftermath of Hurricane Dean, there is homelessness and human suffering, a banana industry producing a fraction of what it once did, with an even more uncertain future.

Q: We are so sorry to hear about your hardship. Could you provide our readers with an update on the impact of Hurricane Dean?

A: As far as bananas are concerned, for all practical purposes, destruction is complete. We’ve stopped all exports. 100 percent of our crop was destroyed. We are the dominant banana producers in Jamaica and account for 85 percent of banana exports, and both estates are blown down. Speaking for small farmers, they’ve experienced a similar outcome. There are odd pockets still standing, but by and large, the Jamaican banana industry is devastated. 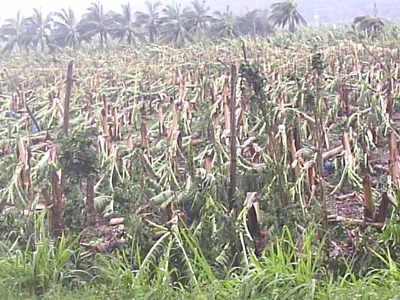 These pictures are from JP Farms,
the agricultural arm for Jamaica Producers Group.

Q: What happens now? Will you be able to rebuild?

A: This is my fourth hurricane in three years; Ivan in 2004, Dennis and Emily in 2005 and now Dean in 2007. This whole thing has been pretty grim. It takes about seven months for bananas to come back. We have to assess what we are doing for recovery, starting again and how much we cut back.

The European Union provides preference to ACP countries of which Jamaica is one. Whether that preference is reduced is under discussion. There’s a case now being heard at the WTO, and that should determine what direction we go. Some resolution should happen in four or five weeks. We’ll have to wait to make decisions, and that seems like a long time to wait. We’ve lost $25 million (U.S.) in export revenues and 3,000 jobs island-wide.

Q: How does Jamaica’s loss compare to other parts of the Caribbean?

Q: In the U.S. and around the world, many produce industry executives have expressed sadness for your plight, and want to know what they could do to help.

A: The governments coordinate the relief program for the nations, but private aid is essential. Here is a list of contacts for people who are interested in contributing:

Q: Have you assessed the damage from Hurricane Dean on the Windward Islands? 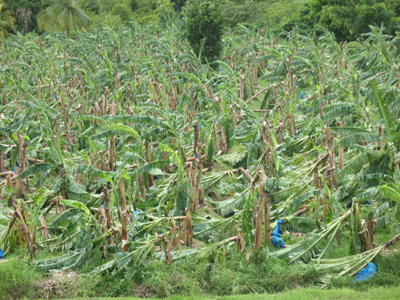 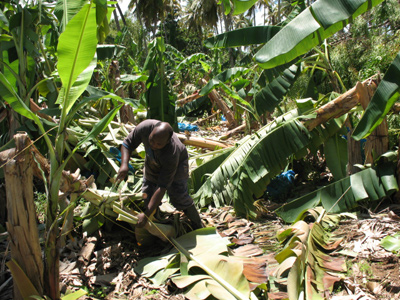 Q: So in certain areas, the crop is OK? How will this impact shipments going forward?

A: We will continue to ship bananas from St. Lucia and St. Vincent as part of the Windwards. Every week we will be shipping from these areas, so we will be able to meet some of our supply commitment to the UK from the Windward Islands.

The marketing company in the UK that is associated with the Windwards will source the rest of the bananas from elsewhere. They will get some supply from the Dominican Republic and from wherever ever else they can.

Q: Could you provide perspective on the financial losses?

A: For the first six months of this year, the Windwards exported 32,000 tons of bananas, bringing in a little over $50 million EC. Our production is down by about 50 percent.

Q: What aid are you receiving for the rehabilitation effort?

A: Just today, the marketing company that purchases and markets Windward bananas in the UK approved a $4 million EC package for the Windward Islands. That pile of money will involve the supply of critical inputs that the farmers will need to rebuild. This will not be enough, but what I expect is the company will be monitoring the progress of rehabilitation and establish additional funding at some time in the future.

That assistance will be provided in concert with whatever programs are approved by the Windward Islands. The governments are all working now on putting together their own contribution packages. National Fairtrade organizations in each of the islands have indicated their willingness to provide assistance as well.

A: As communications manager for the WIBDECO, they can contact me for further information:

We extend condolences to those who have suffered loss and extend the trade’s wishes for a speedy recovery. Ivan in 2004, Dennis and Emily in 2005 and now Dean in 2007 — we hope the powers that be decide you deserve a break for a few years.