One of the time-honored methods for attracting retail attention and boosting visibility and sales, especially during a slow time of the year, is the retail display contest.

One of the biggest around is hosted each year by the Idaho Potato Commission. Now the winner’s are in:

2000 RETAILERS GET CREATIVE FOR CHANCE
TO WIN A SHARE OF MORE THAN $150,000 IN CASH
AND MERCHANDISE PRIZES

EAGLE, IDAHO, May 2, 2007 — Retailers love their spuds and from the contest entries received, it’s evident that February is, without a question, Potato Lovers Month. The Idaho Potato Commission’s (IPC) Retail Display Contest received 2,000 entries this year and awarded more than $150,000 in cash and merchandise prizes to retailers across the country. This year, everyone won! Every qualified entrant received a free MP3 Digital Music player, a $70 value!

February is typically a slow time of year for potato sales and this unique contest, which is in its 16th year, has become increasingly popular among retailers. In just the past three years, an average of over 2,000 stores have participated in this contest annually. For thirteen years prior, the average was barely 600 entries each year.

“The growth and popularity of this contest is unbelievable. The spike in interest is largely due to the fact that the contest is easy to enter, it’s fun, everyone wins a prize and it helps boost sales during a slow time of the year,” said Seth Pemsler Vice President, Retail/International, IPC. “However, if this contest continues to grow at its current pace, February may no longer be a slow sales month for Idaho Potatoes.”

While many displays featured the IPC’s famous Spuddy Buddy mascot, a few retailers went over-the-top with themed displays like “Dancing With the Spuds” and one carefully fashioned in the shape of the state of Idaho.

“This year we are particularly impressed with the quality of the entries — the retailers pulled out all stops and created some very eye-catching and unique displays,” said Pemsler. “No matter how creative a display is though, it has to sell product and that’s not always easy to do. However, this year, retailers accomplished both.”

And the Winners Are….

More than 150 prizes totaling more than $150,000 were awarded across three general categories: Display Winners (broken down into three categories based on number of cash registers at each store), Military (East coast and West coast) and Ad Overlay Contest. To view photographs of all the winning entries, go to http://idahopotato.com/plm_2007/winners/index.php.

Thousands of dollars in prize money were awarded to the top five Display Winners in three different store categories (with matching category manager prizes), plus $100 each to 100 honorable mention winners. The following individuals/stores received first place awards in the Display Contest categories: 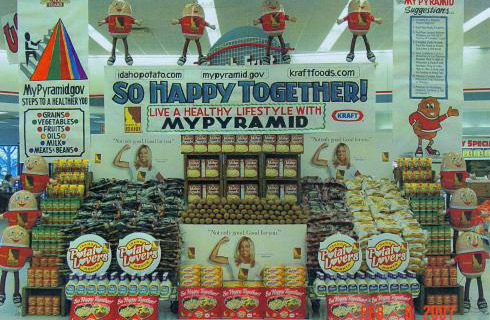 This winning display, showcasing the healthy attributes of Idaho Potatoes, won first place in the 10+ Cash Registers Category. The entry was submitted by Brett Reed of Hy-Vee Food Stores in Windsor Heights, Iowa, who received $1,250.

This Idaho Potato display, featuring a potato heart for Potato Lover’s Month, was a winning display! It was submitted by Jon Duff of Hy-Vee Food Stores in Maryville, Missouri 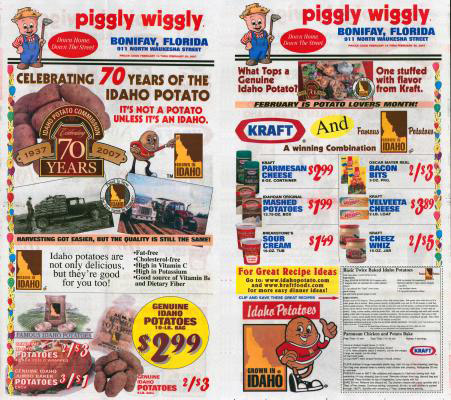 For a complete list of winners and a break-down of how the prizes were awarded please see the attached sheet.

The contest was open to retail supermarket chains and independents only. Displays had to be in place for at least one week during the January 23 — February 27, 2007 contest period, set up in the produce section of the store and include the following: fresh Idaho Potatoes (bag/bulk or both) that have a clearly discernable label showing the Idaho name and the “Grown in Idaho®” seal; a clearly marked Idaho dehydrated potato product; and two of the following three items, KRAFT® Cheez Whiz, KRAFT® 100% Grated Parmesan Cheese and OSCAR MAYER® Real Bacon Bits.

Entries were judged by the Potato Lovers Month Retail Display Contest review committee on the following criteria: use of Potato Lover’s Month signage; creativity of the display; how the display incorporates the partner products; perceived success in generating incremental sales for those products; and, perceived impact on the produce section and the store.

More on This Year’s Contest

Overall, the contest generated entries from supermarkets of all sizes and from all corners of the country — each using existing and customized point-of-sale materials and recipes to drive sales of Idaho Potatoes and the participating Kraft products.

Due to the success of this year’s promotion, Kraft has already agreed to partner with the IPC in the 17th annual Potato Lover’s Month Retail Display Contest in 2008.

These types of contests are more important than is often understood. Some large chains won’t participate because basically they don’t allow their store level people to do more than follow a plan-o-gram. (To its credit, however, Kroger runs a separate competition within the Idaho Potato Commission contest.)

The problem with this approach is that most people with the creativity needed to manage staff and handle relations with store managers, etc., won’t enjoy working under these conditions.

Managing a produce department may not be the most elevated position in the community, but it’s their gig and if you want decent people to take the job you have to give them a chance to do something great once in awhile. The Pundit doesn’t know Donna Shuey, but she did this “Dancing with the ‘Spuds” display at Sloane’s Signature Market in Jackson, Kentucky, and she went home the night that picture was taken knowing she did something great. And so she did. 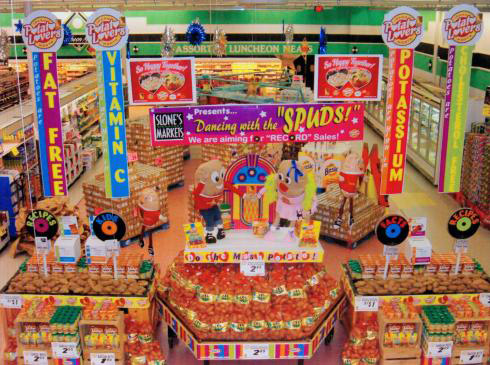 Every opportunity we have as an industry to encourage creativity and leadership among the front line troops interacting with consumers is a great thing. So kudos to the Idaho Potato Commission for sponsoring such an event.

And for those in Chicago this weekend for United, make sure you stop by to salute the winners of the 2007 Retail Produce Managers Award sponsored by Ready Pac. Take a look at the winners from 2006 and 2005 right here.

Sure the Idaho Potato Commission wants to sell potatoes, Ready Pac has fresh-cuts to move, but both ventures focus on the place where the consumer meets the produce — and that is an excellent place for the produce industry to be.