In an age when every supermarket chain is looking to polish its environmental credentials, Hugh Topper of H.E. Butt has won an award:

Hugh Topper, a well-known figure in the produce industry for over 20 years, is the recipient of RPCC’s prestigious 2007 Leadership Award. Topper, Vice-President, Produce Procurement & Product Development, H.E. Butt Grocery Company, was an early advocate for reusable packaging systems and fostered their use in the 1990’s. 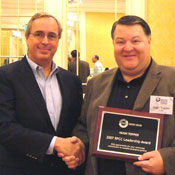 RPCC President Fred Heptinstall presented the award at the Coalition’s annual Education Forum September 19-20. Heptinstall, President of IFCO RPC Management Services, NA, noted, “Hugh is one of the strongest supporters of RPCs from the retail side of the business. His motto is ‘it’s RPCs first as the right shipping format.’ ” Topper’s involvement in reusables over the past eight years has been steadfast; he has been an outspoken advocate for their value and their growth to suppliers and other retailers.

Accepting the award, Topper acknowledged his commitment to reusable transport packaging and the many benefits it has brought to the supply chain and to H.E.B. in particular. “RPCs are an efficient transportation packaging system; they protect the product better and are more sustainable,” said Topper.

In addition to his involvement with the Coalition, Topper has served on the United Fresh Produce Board of Directors and is chairman of the PMA Produce Electronic Identification Board. He is also a board member of the Texas Vegetable & Fruit Improvement Center at Texas A&M University. He graduated from Oklahoma State University with a degree in Agricultural Economics and grew up on a family ranch in southeast Oklahoma.

Recipients of the RPCC Leadership Award meet rigorous criteria in the selection process, including demonstrated advocacy toward the growth, education, and use of reusables; significant contribution to the growth of reusables in the past year; support of the RPCC mission; and direct involvement with the RPCC and its activities

All things “green” are hot now. If you are going to be at PMA and are interested in the subject, the Pundit will be presenting a workshop on Corporate Social Responsibility, a catch-all that includes many of these environmental issues. The Workshop is Friday afternoon at 2:45pm in the Convention Center.

What must make this award especially sweet for H.E. Butt is that it is arch-competitor Wal-Mart that popularized RPCs.

Congratulations to both Hugh and H.E. Butt on this award.