Well our Pundit Store Tour gave us the chance to buy some green seedless grapes packed under the Disney Garden label.

As with most things in life, a lot of the success or failure of these initiatives will be in the execution, and the Pundit thought the design of this bag was simply terrific. 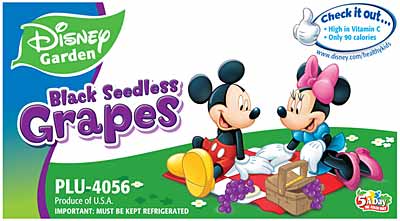 First and most crucially, the illustration was of Mickey and Minnie, not some secondary characters, and they were put on a picnic blanket surrounded by grapes for the picnic.

There is a quick nutrition factoid placed on Mickey’s glove giving the thumbs up sign and indicating that grapes are “High in Vitamin C and only 90 calories”. Nice quick info, although the 90 calories is unclear as to whether this is per serving or for the whole bag.

Also on the front of the bag is a link to Disney’s Health Kid’s web site. The web site is not finished yet, but there is a food pyramid game with Mickey Mouse that my 4-year-old would play for awhile.

The 5-a-Day-the-Color-Way logo closes out the front.

On the back, in addition to the Nutrition Facts pane

l, there are a couple little jokes for kids: Example: Q: What do you call a purple gorilla? A: A grape Ape.

There are also some fun facts, like: The average person eats about 8 pounds of grapes a year.

Also some serious information: Grapes are high in vitamin C, which helps build strong bones and teeth and heals cuts and scratches.

And there’s a specific and valuable tie in between caloric intake and outgo: One serving of grapes = energy to play frisbee for 50 minutes. You should engage in physical activity for at least 60 minutes every day.

There is another “Check it out” feature with Mickey and the food pyramid and, then, another reminder to go to the Disney Healthy Kids web site, plus a mention of the Imagination Farms website and a separate link to a second Imagination Farms site where you can put in a clue (although I could find no place on the site that requires a clue). There is a place you can enter a code to win, but you don’t seem to win anything without the code. Besides, three separate web addresses on one bag is probably too many.

But it is a very strong effort. The grapes I happened to get, though sweet and tasty, were plucked with difficulty out of a badly battered display, making me think that the Disney name, as well as the grapes, would be better protected with a clamshell.