As we head into Christmas and the end of the year, we thought we would take the opportunity to revisit with Randy Pausch. We ran two pieces featuring Randy; first, Last Chance, Literally, To Teach Life Lessons, which told the story of a young Carnegie Mellon professor who has been diagnosed with a fatal illness but who is given the chance to deliver one last lecture and included a video excerpt from the lecture. Then we ran, Last Chance Once More, which featured the lecture in full.

If you didn’t get a chance to hear the lecture, click on one of the links above. Randy is a family man with a wife and young children but is smart, upbeat and inspiring. Everyone who has seen the video is deeply moved.

Professor Pausch, with the clock ticking, is moving his family back to Virginia as his wife’s family is there. Showing the rare grace that defines exceptional people, with only a few months before his health is expected to collapse, Randy Pausch exhibits a wry sense of humor and agrees to give a lecture at Mr. Jefferson’s University, the University of Virginia, where he taught before Carnegie-Mellon. The subject: Time Management. You can watch the video below:

And you can look at his slides as you watch the video here.

Tips for Working in Groups

By Randy Pausch, for the Building Virtual Worlds course at Carnegie Mellon, Spring 1998

Meet people properly. It all starts with the introduction. Then, exchange contact information, and make sure you know how to pronounce everyone’s names. Exchange phone #s, and find out what hours are acceptable to call during.

Find things you have in common. You can almost always find something in common with another person, and starting from that baseline, it’s much easier to then address issues where you have differences. This is why cities like professional sports teams, which are socially galvanizing forces that cut across boundaries of race and wealth. If nothing else, you probably have in common things like the weather.

Make meeting conditions good. Have a large surface to write on, make sure the room is quiet and warm enough, and that there aren’t lots of distractions. Make sure no one is hungry, cold, or tired. Meet over a meal if you can; food softens a meeting. That’s why they “do lunch” in Hollywood.

Let everyone talk. Even if you think what they’re saying is stupid. Cutting someone off is rude, and not worth whatever small time gain you might make. Don’t finish someone’s sentences for him or her; they can do it for themselves. And remember: talking louder or faster doesn’t make your idea any better.

Check your egos at the door. When you discuss ideas, immediately label them and write them down. The labels should be descriptive of the idea, not the originator: “the troll bridge story,” not “Jane’s story.”

Praise each other. Find something nice to say, even if it’s a stretch. Even the worst of ideas has a silver lining inside it, if you just look hard enough. Focus on the good, praise it, and then raise any objections or concerns you have about the rest of it.

Put it in writing. Always write down who is responsible for what, by when. Be concrete. Arrange meetings by email, and establish accountability. Never assume that someone’s roommate will deliver a phone message. Also, remember that “politics is when you have more than 2 people” with that in mind, always CC (carbon copy) any piece of email within the group, or to me, to all members of the group. This rule should never be violated; don’t try to guess what your group mates might or might not want to hear about.

Be open and honest. Talk with your group members if there’s a problem, and talk with me if you think you need help. The whole point of this course is that it’s tough to work across cultures. If we all go into it knowing that’s an issue, we should be comfortable discussing problems when they arise — after all, that’s what this course is really about. Be forgiving when people make mistakes, but don’t be afraid to raise the issues when they come up.

Avoid conflict at all costs. When stress occurs and tempers flare, take a short break. Clear your heads, apologize, and take another stab at it. Apologize for upsetting your peers, even if you think someone else was primarily at fault; the goal is to work together, not start a legal battle over whose transgressions were worse. It takes two to have an argument, so be the peacemaker.

Phrase alternatives as questions. Instead of “I think we should do A, not B,” try “What if we did A, instead of B?” That allows people to offer comments, rather than defend one choice.

The single most important slide in the presentation is an adaptation of a concept that Stephen R. Covey introduced in his The Seven Habits of Highly Effective People: Restoring the Character Ethic 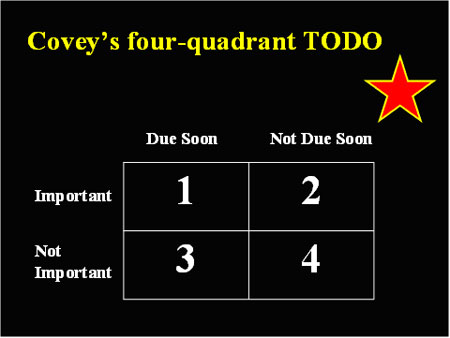 The basic insight is to understand that most of us spend all our time on things that Professor Pausch calls “Due Soon” — these are the urgent things in life, but not necessarily the most important.

So Randy Pausch emphasizes maintaining a “to do” list not in the order things are due but in the four quadrant model on this graphic.

Our experience in teaching this content was that more than reordering is required. The key to success is clearly getting time to invest in the Important/Not Due Soon quadrant. We find you really have to look through your life and eliminate time one spends on not important and not due soon things — like watching late night TV.

This is an enormously powerful concept. The reason a personal trainer works for so many people is because it transforms exercise from the Important/Not Due Soon quadrant into the Important/Due Soon quadrant. If you can afford it and want to spend the money, that is a way of dealing with the situation. Another option, though, is to find a way to put more time into Quadrant 2 activities.

The video has many other tips and carries added poignancy because of the situation of the speaker. It struck us as a useful thing to run as the year winds down. New Year’s resolutions are upon us and most people don’t keep them.

This is not a character flaw; it is a function of the fact that, typically speaking, there were reasons that you didn’t follow the resolution last year — whether it was to work out an hour a day, read a novel a month, go on vacation with your sweetheart once a quarter or something else, there was a shortage — usually of time or money — that held you back.

Better time management is thus crucial for us all to realize our dreams. As Randy Pausch reminds us on one of his slides: 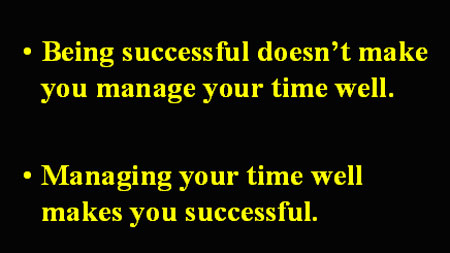 Well worth thinking about as we head into 2008.