Get Well Wishes For Frieda Caplan

We’ve had occasion to mention Frieda Rapoport Caplan many times in these pages:

Be More Popular at Cocktail Parties 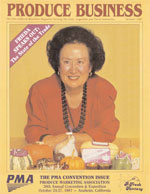 We’ve also had the opportunity to sing Frieda’s praises to Inc. magazine:

Frieda is doing well. On April 5th she had heart valve replacement surgery due to aortic stenosis. She was fortunate to work with Dr. Daniel M. Bethencourt and his practice, The Bethencourt Group, an MIT- and Yale-educated surgeon who has researched widely and has special expertise in valve replacement.

Frieda is at home now with two aides — one named Apple and one named Gellie — pronounced jelly! There will be some further cardiac rehabilitation at Los Alamitos Hospital, though Frieda has already demanded that work be brought home from the office for her.

It was 48 years ago this month that Frieda founded her business. Though the volume is small compared to those who ship conventional commodities, the specialty niche she pioneered has transformed the business, allowing supermarkets to use produce as a key point of differentiation.

Frieda was pivotal in transforming the trade’s attitudes toward women in the business, and the family has supported the Frieda Rapoport Caplan Family Business Scholarship, which brings an associate at a family business to the United convention each year.

Frieda has also touched many on a personal level. Just recently she came to hear the Pundit’s presentation at the Fresh Produce and Floral Council, and the Pundit family shared a wonderful afternoon with her at Karen’s home.

We’ve had the privilege and burden of giving eulogies — sometimes at the funeral, sometimes in print — for many, including family members and industry leaders, such as Carl Fields, Ralph Pinkerton, David Stidoph, Joe Nucci and Stan Silverzweig. Each time we have regretted that we didn’t say things while our friends were alive.

Aortic stenosis is typically fatal if left untreated. Thanks to a skilled surgeon, Frieda has a good chance of living a good healthy life for many years to come, being a source of inspiration and joy to her family, friends and the industry at large.

Those who have been inspired by her have been given another chance to let her know. If you would like to wish Frieda a speedy recovery or send other words of appreciation, you can do so here.

Our prayers are with Frieda and her family, that she may know a speedy and complete recovery.