The American premiere of Fear No Fruit, the documentary focused on the life and times of Frieda Caplan, received significant press in America:

Fear No Fruit does a great job of showcasing both Frieda and Frieda’s. We get Frieda — 91 years old, with no signs of slowing down — talking about her life, how she got in the industry, and how it was being a married mother with children in the 1960s while working in produce, as demanding a profession as there is. The filmmakers do a great job of having television clips of Frieda through the years explain the company’s rise — both a clever montage, stylistically, but also showing how much influence she’s had over decades that the press went to her again and again.

And if that’s not enough, there’s a shot of the staircase at the offices of Frieda’s Produce highlighting just some of the hundreds of fruits and vegetables she’s introduced to American palates over the decades — as awesome a Walk of Fame as you’ll ever see.

Then Fear No Fruit switches over to family succession in the form of Frieda’s daughters, Karen Caplan and Jackie Caplan Wiggins, who currently serve as president-CEO and vice-president-COO, respectively, and even sneak in Alex Jackson, Karen’s daughter and a Frieda’s marketing program manager.

All three talk about their own challenges living up to their legendary mother (and grandma) while forging a new path forward for the company. There are testimonials by journalists about the company, a behind-the-scenes look from staff meetings to going to downtown Los Angeles at 3 a.m. on the search for deals, and much more. It’s a great family story, an awesome profile of a company, and enjoyable throughout thanks to the wisecracking Frieda.

And though it’s never really painted as such, it’s more feminist a film (and company) than any Lena Dunham claptrap can ever hope to be.

Take a look at the trailer here:

Now, The London Produce Show and Conference is proud to host the European Premiere of this documentary, with an exclusive post-film discussion moderated by yours truly with Frieda’s eldest daughter, Karen Caplan, President and CEO at Frieda’s.

The official press release is here:

“It is an extraordinary privilege to bring this film to London and to host its European premiere,” says Jim Prevor, editor-in-chief of PRODUCE BUSINESS magazine and founder of The London Produce Show and Conference. “Frieda Caplan is more than a produce industry icon; she helped bring about the ‘foodie culture’ that so defines today’s culinary scene. Frieda built her company and reputation on bringing the most interesting fruits from around the world to America. By hosting this film, we get to introduce one of the most extraordinary Americans to England, Europe and the world at large.”

This exclusive red carpet event, held in the rarified confines of the Screening Room at the elegant One Aldwych Hotel just off of Covent Garden, starts with drinks and canapés.

You can see the announcement below. This is a capacity-controlled event, so if you would like an invitation please let us know here. 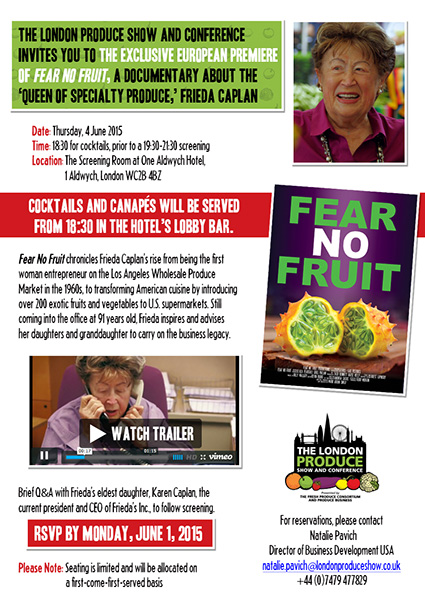