From Anaheim To Singapore… Jetting Into The Future

I am eating fruit. A banana — StaReyna brand — a mandarin of some sort, a persimmon, an Asian pear and a plum — so if we still had 5-a-Day, I could say I did my bit in one sitting.

I enjoy fruit, and when it is presented to me on bended knee by an austerely beautiful Asian woman, wearing her hair up and exotic eye shadow which matches a modern day interpretation of a kimono-like dress, and she seems to know no greater joy than to serve me the precise fruit I desire, I am inclined to keep the fruit basket coming.

I write from the first class “suites” on a brand new A-380. This one is operated by Singapore Airlines — the first airline in the world to fly the A-380, which has a reputation as one of the finest airlines in the world, a unique combination of ultra-modern western technology and safety standards with an eastern culture that offers pure luxury in service.

The A-380 is an example of the technology part. Produced by Airbus, it is the largest plane in the world. List price: 375.3 million. Plus four massive Rolls-Royce engines; list price 12.5 million. Think of a 747 with its distinctive “bump” up front that represents a small second story… now extend that bump the whole length of a plane so it is a true double-decker. That is pretty much what it looks like.

Here is a picture: 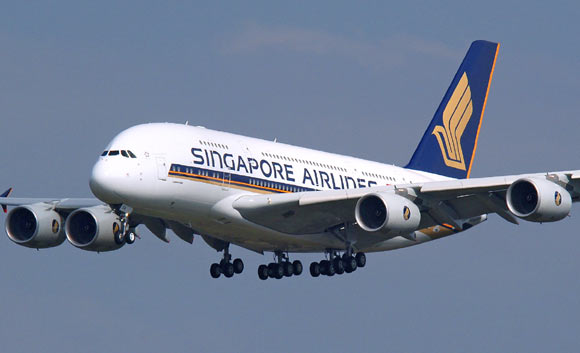 In fact, the A-380 was designed in a manner not dissimilar to my description. You might think that on a project as enormous as this one, the engineers would start out with a blank sheet of paper and build the optimal plane. In reality. one of the lessons of living is that there are always constraints.

In this case, the Airbus executives demanded that the engineers design a plane that could fit into gates around the world that were sized to fit a 747. The executives realized that adoption — and thus sales — would be significantly slowed if every airport had to be retrofitted with new-sized gates before anyone could use the plane.

So the engineers couldn’t go much wider or much longer, but they could extend the second deck and thus go higher over most of the length of the plane.

Space in the air can be a great luxury. As a boy, the Pundit Poppa and Momma took the family on a Pan Am flight when it was the first carrier to fly the 747. It used to have a piano bar, and first class passengers were escorted into a separate dining room for dinner.

In time, all these amenities diminished because passengers weren’t willing to pay sufficiently higher ticket prices to support them. Ultimately the most profitable thing to do with a plane has been to squeeze in more seats.

It is difficult to know how the A-380 will ultimately be used. For now, on Singapore Air the first class section has been designed with spacious suites, each one of which contains a kind of Murphy-type bed. There are a couple of “double suites” where couples can have a kind of double bed together — and even a bit of privacy as the suite doors can be closed sort of like the old Pullman railroad compartments.

The engineers have designed special jetways for the A-380 so it can simultaneously load passengers on the upper and lower decks. This addresses the big concern that it would take too long to board and empty such a large plane.

Though the plane is massive and, in many ways, a pinnacle of human engineering, it is in many ways dated. One is reminded of the joke on the opening of the Hunts Point Market in 1967, in which it was declared that because it took so many years to develop. and trailer lengths had changed from the time the design was finally approved, that the market was the newest antiquated market in the world!

Simultaneously with Airbus developing the A-380, Boeing began development work on its 787. This plane, now flying, with ANA as its launch airline, seems much more likely to represent the future of aviation. Its key innovation is that it is built mostly of composites, rather than metal.

This allows for a higher degree of humidity in the air — 15% as opposed to 4% on other airplanes — as there is less concern with corrosion on metal. It also allows for much larger windows without a need for structural reinforcement. Finally the composite structure allows for increased cabin pressure. All combined, these three design elements correspond to a more comfortable and refreshing ride. You can see the plane here:

The plane is smaller than the A-380 and in that choice, one sees differing strategic visions between Airbus and Boeing as to the future of air travel.

Airbus looks at how difficult it is to build airports, noting that every proposal, even to expand runways at existing airports, brings howls of protest, and the company surmises that the future must involve maximizing the value of each take-off and landing slot. So it sees larger planes as the future.

Boeing sees consumer demand growing for convenience, so it sees direct flights as the future. Instead of funneling all the flights to hub airports, Boeing sees a future of smaller planes making direct flights from more cities, so it is not just LAX to Singapore, but also Cincinnati to Singapore.

In any case, we didn’t head home from PMA. Instead we followed the admonition of Horace Greeley, who famously said “Go West, young man.” He meant head toward opportunity; head toward the future.

Indeed the tale of the two jets — Airbus 380 and Boeing 787 — gives an American a sinking feeling that maybe the world isn’t exactly going our way. After all, the lead airlines are both Asian-owned.

Travel is a good time for reflection. When we first when to Fruit Logistica, we reflected on what it meant for a Jew to visit Berlin in a piece we titled Dispatch From Frankfurt — An American Jew Goes To Germany.

Now the angst is not religious; it is patriotic. Will a rising Asia supersede American leadership in the world, and, if so, will it be for better or worse?

We have become best friends with our onetime enemy, the Japanese. That relationship and the way in which two such committed adversaries could find their way to true friendship is a model for the civilized world.

Japan, though, is a declining power. For all its incredible technology and its cultural unity and insistence on perfection, the Japanese simply do not have enough babies. So the population ages and Japan has experienced annual population declines. The population of Japan hit an all-time high in 2008 of 128 million and has fallen steadily since.

Barring dramatic changes in life expectancy, birth rates or immigration, Japan’s population will keep declining by roughly one million people every single year in the coming decades, which will leave Japan with a population of 87 million in 2060. By that time, a majority of the population is expected to be over the age of 60.

So Japan is frightened too.

The growing population of China and India, Indonesia and other Asian powers, combined with just moderate prosperity, changes the world. We are all in favor of free trade, but what if a power such as China uses the fruits of that trade to build better weapons than we have?

We can hope that prosperity can give each country a stake in peace. But China has been engaging in a series of territorial disputes with its neighbors, it has just launched its first aircraft carrier, and, in general, is flexing its muscles.

So in flying East, an American flies into the unknown. It is the future, but what will the future bring?

For now, though, we fly to Singapore, and Singapore is a marvel.

A small island, it is the most modern of cities, yet carries the rich heritage of its mostly Chinese citizenry proudly.

It is a place all about business, with many lessons for the US. Yet Singapore has limitations that pose a challenge for the future. More on that in our next post.

But for now, its business focus is a wonder. They get away with things we never could do in the US. As the Pundit gets off the jet, he is greeted by an escort who scoots him through the airport on a golf cart. They radio the Pundit’s bag tag number to someone as the Pundit seemingly skips customs and all those annoying details.

Instead the Pundit is swept into the “Commercially Very Important Persons” building, and his passport is stamped. The Pundit thanked for coming to Singapore and is then escorted to a Bentley waiting out front where the Pundit’s luggage has magically appeared in the trunk.

The driver starts off but not before explaining: “We know well of the importance of your work here in Singapore. For your convenience the Bentley is equipped with Wi-Fi so that you might better do your important work.”

They really know how to say they want your business here.

More on that business in the next post as well.