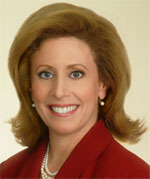 Q:How did you become involved with Let’s Move Salad Bars to California Schools?

A: As you know, I was chairman of United Fresh back in 2003 and have always been personally supportive of these industry initiatives. At Frieda’s, our mission is to change the way Americans eat fruits and vegetables.

When I was chairman of United Fresh, I testified in Capitol Hill. I walked in carrying a basket of produce with jicama and kiwano horned melon, and they thought I was crazy. I argued that if you give kids access to fresh fruits and vegetables, it can change consumption patterns for life.

Q: So it wasn’t a leap for you to take on the Let’s Move Salad Bars to California Schools campaign…

A: In Dallas at last year’s United convention, when Dan’l Mackey Almy announced that 100 Texas schools would receive donated salad bars, I contacted Lorelei DiSogra about the San Diego convention kick off plan. She said, “how perfect. Dick Spezzano, with his former retailer background, said he wants to help too. Would you both be co-chairs?” Since we were both in Southern California, we also wanted representatives from other parts of the state.

Our strategy to elicit donations was premised on that iconic commercial jingle, “Nobody Doesn’t Like Sara Lee”; how can you be against giving kids a salad bar? With a relatively small investment, would you like to help us put salad bars in schools, where they are set up with the infrastructure and the supply chain to get more produce to children?

These schools have the backing of school management and of the school district. When we saw the wait list of some 350 schools requesting a salad bar, and the whole idea that the list would keep growing, we were determined.

In 2011 at our convention in New Orleans, we funded 43 schools, and in 2012 in Dallas, 100 schools. Naturally, with California being as competitive as we are, we stepped it up. Think of the superintendent or foodservice director, ready to go with the infrastructure and initiative. Think of the attributes a salad bar can bring, increasing children’s enthusiasm and intake of fresh fruits and vegetables, all the associated health benefits, as well as the positive anecdotes from school officials that increasing students’ produce consumption can lead to better attendance, more academic alertness and less behavioral problems. In addition, kids go home to their parents and want to go grocery shopping and help pick out produce.

Q: Lorelei DiSogra and CDC’s Diane Harris point to the challenges of going beyond anecdotal benefits to building evidence through long-term research studies. Does this present issues when you’re eliciting donations?

A: Michelle Obama launched the Let’s Move! campaign to reverse childhood obesity in one generation. It’s about eating right and exercising, and Let’s Move Salad Bars to Schools is one way to help in that goal. It’s important to start out at a very young age to integrate fresh fruits and vegetables in the diet. It’s not OK to pick up a Coke and donut on the way to school. 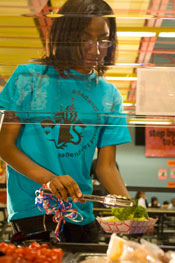 The food at school cafeterias when we grew up was crappy, but kids line up for the salad bar to eat fresh produce, not that canned goopy stuff. Now the staff and other members at school also have the opportunity to eat off the salad bar as well.

Frieda’s experience is that kids are used to just having the basics — apples, bananas oranges — and that bringing in more interesting items and variety adds creative fun, exposing kids to different tastes in the school snack program and lunch program.

Instead of just selling iceberg lettuce and such, it’s important to have a salad bar flush with colorful, plentiful choices. What’s happening is that people are talking about supplying salad bars with sliced kiwi, red pear tomatoes, baby cucumbers, precooked squash… not just your regular commodities.

Q: Could you talk more about the scope of the program and its impact on the industry?

A: The campaign is for one year, but it always has a halo affect. Our committee with 20 people will have enough donations to reach our goal of 350 schools; some will give $250,000; some will give one salad bar, but this campaign will also raise awareness across all states. So people will read about it and gain interest in our communities as well.

Retailers, shippers/growers and many interested parties are making donations. Bring on salad bars! We know we set a large goal, but it’s the right thing to do. What makes it easy to approach customers is that it’s also a good business decision. I’ve spoken to foodservice distributors that supply fruits and vegetables to schools with salad bars, who say their business has more than doubled.

All we’re asking the industry to do is to provide the vehicle. I think in every transaction that happens in the produce business, there’s always the logistical process. Sometimes there are no hitches, other times problems, but in general this is pretty easy.

There are systems and processes in place in every school district to facilitate getting food to schools. I don’t think that’s the issue. What’s wonderful is that more of our fresh produce will be available to schools. Those that supply schools will be able to increase the amount of fresh produce, which leads to more buying power and a stronger industry.