The FDA continues its habit of making mountains out of mole hills. The discovery of a single jalapeno with Salmonella Saintpaul at the warehouse of a tiny distributor named Agricola Zaragoza on the McAllen Produce Terminal Market simply doesn’t mean very much.

Oh sure, FDA got a recall out of this little firm that doubtless confronted FDA without its own epidemiologist. That just means FDA is very intimidating since they have so much discretion that they can close down a business with border holds and selective sampling. It doesn’t mean this one single pepper has anything to do with the outbreak. 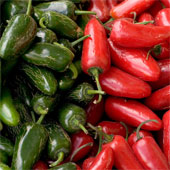 Here is a scenario: A buyer on the McAllen market goes to lunch on Monday and gets an upset stomach but comes to work on Tuesday. His bathroom sanitation is not perfect. He opens a box of jalapenos to check them out, runs his fingers through them, puts the box back.

Thus we come to a single pepper with Salmonella Saintpaul on it that came to be discovered by the CDC. Not the cause of an outbreak, but a victim.

Yet just ask anyone on Wall Street who was recently burned on investments by events that, statistically, would only occur once every hundred years and you learn that statistics are tricky things. The fact that something statistically will only occur once each century does not mean it can’t happen three times this week.

So this singular pepper may simply be a coincidence, having nothing to do with the outbreak.

Of course, the discovery could come to mean something. Although this little distributor is implausible as the vector for an outbreak of this scope, if the traceback to the farm leads to something, then this finding would be significant.

The fact of the matter, though, is that it hasn’t. This lone finding means, literally, nothing.

Because the FDA likes to celebrate its accomplishments, it held a press conference and portrayed this inconsequential, this meaningless finding, as significant. So we wind up with highly predictable headline, such as the U.S.News & World Report Healthday column proclaiming that Peppers Picked as Salmonella Culprit. In fairness, this is not what CDC or FDA said — but they knew what headline they would get.

Once again, needlessly and with reckless disregard for the rights of innocent people, the FDA has destroyed an industry. Louise Schiavone of CNN, whose dogged determination has come to be a priceless resource for the country in this matter, asked FDA’s Dr. David Acheson, M.D., Associate Commissioner for Foods, point blank: What about farmers in, say, the northeast, who never ship their product through Texas… will they be exempt from your plan to ban jalapenos?

Yet, Dr. Acheson thinks that it is within his authority to destroy the fortunes of innocents.

He falls back on two things: First, FDA’s imperfect knowledge. He speculates before the national media that perhaps the peppers from Agricola Zaragoza were sent to the northeast and met in a distribution center with northeast-grown jalapenos. Yet, these are implausible scenarios, and an agency charged with regulating food safety on this industry should either know better or ask for help from USDA and industry. Second, like Harry Potter hiding behind his invisibility cloak, Dr. Acheson hides behind the mantle of public health.

Repeating the words “public health” as a mantra, though, does not make it true. The bottom line is that the risk for healthy people of eating fresh jalapenos was always inconsequential and, at this date, is de minimis. FDA’s issuing of a ”Recommendation Not To Consume” and asking foodservice and retail operations not to serve these items is a very different thing from the FDA issuing a notice about what the FDA believes the risk is of consuming these items.

Despite the intense attention to this outbreak, despite the CDC drafting extra labs to speed up processing of illnesses, no new case of sickness has been reported since July 4, 2008!! That is 17 days ago. Salmonella reveals itself within 72 hours.

The FDA just decided to destroy the chili pepper industry — yes, jalapenos are a tiny item but they account for more than half the shipment, typically, of the little guys who sell chili peppers. Without the jalapenos, they won’t fill up the trucks and the whole chili pepper business will die — after the outbreak was over.

Beyond this, the singular thing that has to come out of this outbreak is that the FDA must fulfill its obligation to public health by declaring what it knows but must be prohibited by law from making recommendations.

People elect to take risks. They sky dive, hang glide, deep sea dive, ski, mountain climb… they drive cars, take airplanes. Some even order a rare hamburger, or eat steak tartar or a raw milk cheese. There is a whole movement of people who demand the right to drink non-pasteurized milk.

A quick look at the epi curve, and one sees the daily incidence has been declining for over a month. What could Dr. Acheson possibly think the risk really is?

The answer is Dr. Acheson doesn’t know and doesn’t care. In the press conference, he was asked what the cost would be of discarded pepper and he said he didn’t know. We would point out that he doesn’t know because he doesn’t want to know.

Dr. Acheson honestly believes that if thousands of people go bankrupt because he made a proclamation, then that is OK — mere collateral damage on the road to protect public health.

In America, though, it is not OK and the FDA must be restricted from destroying the property of innocents. We discussed the ethics of this here.

People have interests in safe food, but they also have an interest in the pursuit of happiness. If the FDA thinks it can just shut down a New Jersey jalapeno farm on the odd chance that maybe it has something to do with something, then we are no longer a government of laws, we are just at the mercy of men like Dr. Acheson.

If this kind of behavior is acceptable by government, it is not likely that the jalapeno growers will be the final victims.