…Is where an important segment of industry leadership will be heading this weekend and the fact that 40 industry executives, and the companies behind them, have made this commitment is probably the most positive statement that can be made about the state of the produce industry. 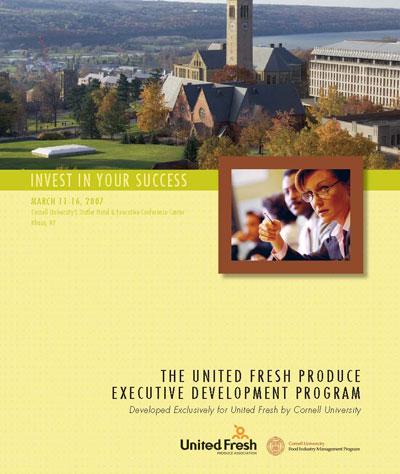 There was never a question that the program would be both valuable and exceptional. It was developed under the direction of a highly esteemed Professor, Ed McLaughlin, Director of the Food Industry Management Program, and Robert G. Tobin, Professor of Marketing at Cornell University. The concept is similar to wildly successful programs Cornell has developed for other industries.

“…United is betting that members of the produce industry will line up 40 executives each year and pay anywhere from $4,995 to $8,500 per person to attend. The variance in price is based on when one enrolls and membership status. They also require the commitment of five consecutive nights at the program…

The Pundit wishes United every good fortune. No produce industry function has ever succeeded in selling itself for this price. If it succeeds it will, without a doubt, be a symbol that the produce industry has reached a new level of sophistication.”

And the program did succeed. It not only sold out, it had a waiting list. Its success stands as a symbol of the growing maturity of the produce industry.

Industries, of course, aren’t the only things that mature; people do as well. And when the good professor called to invite this Pundit to join the faculty of the program, it seemed as if a cycle had turned.

On the way up to Ithaca to teach the Critical Industry Issues and Food Safety segments of the program, we will remember a trip to Ithaca a long time ago. Instead of being accompanied by wife and children, that trip was taken with mom and dad. And instead of staying at The Statler Hotel on campus, the destination was U-Hall 2. Instead of going to teach, that trip was to attend freshman orientation.

When one works hard, and the Pundit does, it is nice to receive a quiet boost every now and then. For the student to become the teacher is a special satisfaction.

Many years ago when United started its Leadership Development Program, nobody fully realized how important that program would be to the industry. If there was any doubt, the outpouring of affection for Tim Vaux as he left Dupont, United’s partner in the program, confirmed its value.

The 40 students this year will one day be seen as the first in a long line of classes, and they will take special pride in having been on the Cornell campus at this very first iteration of the United Fresh Produce Executive Development Program in March of 2007. Your humble Pundit will be proud to have been there with them.