Carrier Transicold is out with a nifty container that can accommodate both frozen and refrigerated product: 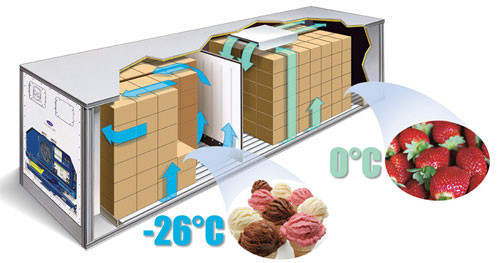 SYRACUSE, N.Y., March 6, 2007 — Underscoring its commitment to container industry innovation and leadership, Carrier Transicold, a business unit of United Technologies Corp. (NYSE:UTX), has introduced the ThinLINE DT container refrigeration system, the only system on the market to offer a dual-temperature capability

The ThinLINE DT system provides the unique ability to split a container into two variable-sized compartments, each with different temperature requirements. It can alternately cool one compartment and freeze another. Or, if refrigerating one compartment and heating the other is needed, it can do that, too.

The benefits are better container utilization and lower shipping costs. Instead of shipping two partial loads requiring different temperatures in separate containers, they can be shipped within a single 40-foot-high cube (HC) container. For added utility, the container can even be operated as a single-compartment unit, as needed.

“It is perhaps the most versatile container refrigeration system ever developed by Carrier,” said Scott Pallotta, director of marketing, Carrier Transicold. “It addresses the fact that one size does not fit all needs.”

An insulated moveable bulkhead partitions the container into two sections. The bulkhead slides along a track and adjusts six feet from center in either direction. This means the compartment can be divided into two 20-foot compartments or into two compartments of variable size up to a 14-foot/26-foot combination.

The bulkhead, hinged at the top, swings up for single-compartment operation, allowing the container to serve as a standard 40-foot HC unit

“This is typical in remote applications such as Alaska or island hoppers in the Pacific Rim and Caribbean,” Pallotta said. “In those instances, there may be demand for 40 feet worth of cargo but it’s mixed between frozen and perishable. Rather than paying the rates for two 20-foot reefers or one 20- and one 40-foot unit with partial loads at different temperatures, they can now use a single container at a reduced expense.

“The size variability provides efficient use of cargo space,” Pallotta added. “Only Carrier offers the flexibility to custom configure a container to compartments as small as 14 feet and as large as 26 feet for one trip, then set up two equal 20-foot spaces for the next, and operate as a single 40-foot container after that.”

The Pundit was involved in selling all kinds of items beyond produce to the Caribbean because they couldn’t fill the van with just produce. Something like this would have come in handy — if the shipping lines will cooperate with reasonable rates. Learn more about it right here.