Those who enjoy the Perishable Pundit should know it likely wouldn’t be here if not for PRODUCE BUSINESS magazine, and PRODUCE BUSINESS magazine likely wouldn’t be here except for the vision of many produce industry leaders who, early on, recognized the value of what we would contribute to the trade. These leaders recognized that this contribution would attract a large, engaged and influential readership.

One of the most important of those early visionaries is Rick Utchell, Vice President of Marketing for Dole Fresh Fruit, who recently announced his plans to retire from Dole after almost four decades of innovation and leadership.

Although most in the produce trade think of Dole as a giant, its marketing budget is but a tiny fraction of what Kraft or Coca-Cola spend. Yet Dole is an iconic brand in the trade, and it is Rick who has for decades spun gold for Dole out of comparatively little money. 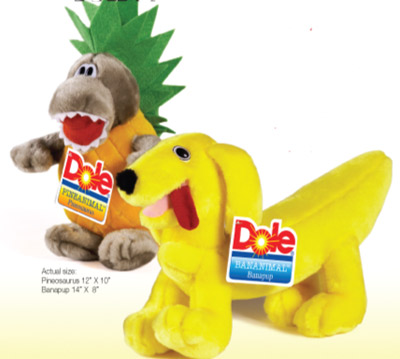 In marketing circles, Rick is widely known as the father of the Bananimals, which won every award in the book for marketing innovation. Today everyone wants to market produce to kids, while Rick was doing it long before marketing produce to kids was cool.

He managed to make deals with major consumer packaged goods companies that brought the benefits of their marketing and couponing budgets to Dole and into the produce department. 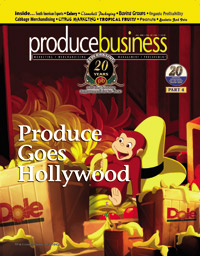 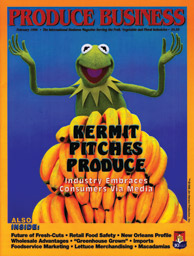 Rick is also respected in Hollywood and was able to get Dole involved with important partners, including the producers of Kermit the Frog and Curious George — and not in a trivial way. You watch the Curious George movie and see that little monkey waking up in the hold of a ship only to realize he is surrounded by clearly branded Dole bananas — and you know that a master has orchestrated all this.

As so often happens in this business, we started out as strangers and ended up as friends. We would meet every so often for dinner, and we did so long after we had any real business to discuss, because we enjoyed it. Rick knows everyone, and when we couldn’t find a florist for the Pundit wedding, it was Rick who found us an expert florist — although Rick lives on the west coast and the wedding was in New York.

Rick has orchestrated countless events for Dole over the years — ship christenings, headquarters openings and much more. Now, as part of a long planned transition, he is passing his baton to Ronda Reed.

Ronda is no stranger to those who know Dole:

Dole Fresh Fruit Company, a subsidiary of Dole Food Company, Inc., announced today the naming of Ronda Reed to Vice President of Marketing for Fresh Fruit and Vegetables. In this role, she will oversee and integrate all of the strategic marketing operations, new product development, consumer promotions, packaging and public relations for these two areas of the Dole Food Company in North America.

Ms. Reed has been with Dole Food Company for 12 years, most recently as Director of Marketing for Fresh Fruit leading all national and local marketing activities. Prior to this she spent 10 years with the Packaged Foods division where she was instrumental in launching Dole’s Plastic Jar product line, as well as managing the canned fruit and canned juice lines and overseeing trade marketing covering the entire geographic U.S. Her marketing experience also includes positions with Nestle Food and Nielsen Marketing Research.

Following the recent retirement announcement of Rick Utchell, Vice President of Marketing for Dole Fresh Fruit, after 37 years with Dole Food Company, it is imperative that the company move quickly in transitioning that valuable knowledge base throughout the organization.

“Ronda and I have worked closely together for the last year and a half,” said Mr. Utchell. “Her knowledge of the business and successes within Dole Fresh Fruit and Packaged Foods are very impressive and has required her to combine strategic thinking, leadership, and creativity.”

“A success record like Rick’s is not easily replaced. We wish him the best in his long deserved retirement,” said Mike Cavallero, President of Dole Fresh Fruit. “Yet Ronda has clearly demonstrated she has the skills and capabilities to pick up the baton, and I am confident that her style and results-oriented approach will be an asset in supporting our management objectives moving forward.”

Ms. Reed has a BA degree in Economics and an MBA in Marketing, both from the University of California at Irvine.

We wish Ronda the best in her new position, and we wish Rick every happiness in his retirement.