Al Gore accepted the Nobel Peace Prize thus becoming the second former Vice President to win the prize. The previous recipient was President Theodore Roosevelt. You don’t have to have any particular opinions on global warming to see the distance between these two awards as part of the politicization of the Nobel committee and the general decline in standards.

Theodore Roosevelt won the Nobel Peace Prize — the first Nobel won by any American — for, well, making peace. Specifically he shepherded the negotiations to end the Russo-Japanese War. These negotiations started at the President’s home in Oyster Bay, Sagamore Hill — a favorite boyhood haunt of the Pundit by the way — and continued at and around a naval base in Portsmouth. They resulted in the Treaty of Portsmouth which ended the war between Russia and Japan. 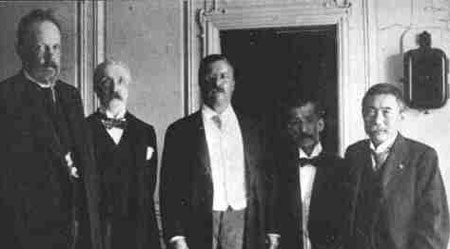 In contrast, Al Gore won the Nobel Peace Prize for, well, being a propagandist. Certainly not for anything to do with peace.

CNN’s Miles O’Brien conducted an interview, and The Wall Street Journal excerpted from it, with John Cristy, who is the director of the Earth Systems Science Center at the University of Alabama in Huntsville and a participant in the U.N’s Intergovernmental Panel on Climate Change — which is the co-recipient, along with Al Gore, of this year’s Nobel Peace Prize:

O’BRIEN: I assume you’re not happy about sharing this award with Al Gore. [Are] you going to renounce it in some way?

CHRISTY: Well, as a scientist at the University of Alabama in Huntsville, I always thought that — I may sound like the Grinch who stole Christmas here — that prizes were given for performance, and not for promotional activities.

And, when I look at the world, I see that the carbon dioxide rate is increasing, and energy demand, of course, is increasing. And that’s because, without energy, life is brutal and short. So, I don’t see very much effect in trying to scare people into not using energy, when it is the very basis of how we can live in our society.

O’BRIEN: So, what about the movie [”An Inconvenient Truth”]; do you take issue with it, then, Dr. Christy?

I suppose, fundamentally, it’s the fact that someone is speaking about a science that I have been very heavily involved with and have labored so hard in, and been humiliated by, in the sense that the climate is so difficult to understand, Mother Nature is so complex, and so the uncertainties are great, and then to hear someone speak with such certainty and such confidence about what the climate is going to do is — well, I suppose I could be kind and say, it’s annoying to me.

O’BRIEN: But you just got through saying that the carbon dioxide levels are up. Temperatures are going up. There is a certain degree of certainty that goes along with that, right?

CHRISTY: Well, the carbon dioxide is going up. And remember that carbon dioxide is plant food in the fundamental sense. All of life depends on the fact carbon dioxide is in the atmosphere. So, we’re fortunate it’s not a toxic gas. But, on the other hand, what is the climate doing? And when we build — and I’m one of the few people in the world that actually builds these climate data sets — we don’t see the catastrophic changes that are being promoted all over the place.

Al Gore’s Nobel Prize acceptance speech, which you can read here, is filled with hysteria and over-stated claims:

In the last few months, it has been harder and harder to misinterpret the signs that our world is spinning out of kilter. Major cities in North and South America, Asia and Australia are nearly out of water due to massive droughts and melting glaciers. Desperate farmers are losing their livelihoods. Peoples in the frozen Arctic and on low-lying Pacific islands are planning evacuations of places they have long called home. Unprecedented wildfires have forced a half million people from their homes in one country and caused a national emergency that almost brought down the government in another. Climate refugees have migrated into areas already inhabited by people with different cultures, religions, and traditions, increasing the potential for conflict. Stronger storms in the Pacific and Atlantic have threatened whole cities. Millions have been displaced by massive flooding in South Asia, Mexico, and 18 countries in Africa. As temperature extremes have increased, tens of thousands have lost their lives. We are recklessly burning and clearing our forests and driving more and more species into extinction. The very web of life on which we depend is being ripped and frayed.

As John Christy wrote some time ago, to interpret weather changes in our own lifetimes this way is bizarre:

Mother Nature simply operates at a level of complexity that is, at this point, beyond the mastery of mere mortals (such as scientists) and the tools available to us. As my high-school physics teacher admonished us in those we-shall-conquer-the-world-with-a-slide-rule days, “Begin all of your scientific pronouncements with ‘At our present level of ignorance, we think we know…’”

I haven’t seen that type of climate humility lately. Rather I see jump-to-conclusions advocates and, unfortunately, some scientists who see in every weather anomaly the specter of a global-warming apocalypse. Explaining each successive phenomenon as a result of human action gives them comfort and an easy answer.

Others of us scratch our heads and try to understand the real causes behind what we see. We discount the possibility that everything is caused by human actions, because everything we’ve seen the climate do has happened before. Sea levels rise and fall continually. The Arctic ice cap has shrunk before. One millennium there are hippos swimming in the Thames, and a geological blink later there is an ice bridge linking Asia and North America…..

Then there is the challenge of translating global trends to local climate. For instance, hasn’t global warming led to the five-year drought and fires in the U.S. Southwest?

There has been a drought, but it would be a stretch to link this drought to carbon dioxide. If you look at the 1,000-year climate record for the western U.S., you will see not five-year but 50-year-long droughts. The 12th and 13th centuries were particularly dry. The inconvenient truth is that the last century has been fairly benign in the American West. A return to the region’s long-term “normal” climate would present huge challenges for urban planners.

When people such as Al Gore spout things off, it is not trivial. As we pointed out here in our piece entitled Tesco, Polar Bears And Social Responsibility, first Al Gore promotes these ideas and next thing, Tesco is posting photos of polar bears: 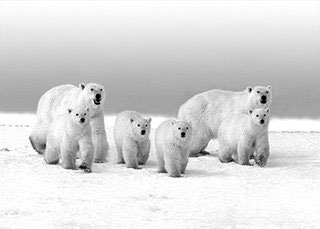 So the Tesco CEO is sending out post cards to remind us that the polar bears are drowning due to global warming, although a British judge — a Labor party member at that — found otherwise:

…a British High Court judge, Mr Justice Barton, ruled that Al Gore’s Oscar-winning film An Inconvenient Truth was guilty of ‘alarmism and exaggeration’ in making several claims about the impacts of climate change, including the plight of polar bears.

Claims in the film that the animals were drowning because they were being forced to swim greater distances due to disappearing ice were unfounded, the judge said. There was only evidence that four polar bears had drowned and that was due to storms.

The truth is that moderating global warming, even if possible, is being treated as a virtue unto itself. However, our piece on Bjorn Lomborg, which you can read here, points out that we can impoverish ourselves and the world by modestly delaying global warming or we can use our resources to make the world wealthier and thus better able to mitigate the negative effects of climate change and take advantage of the positive impact of climate change.

Al Gore, though, seems to have no doubts at all.

Yet Theodore Roosevelt, who didn’t bother to go to Sweden to address the academy until after his presidency was over, didn’t see even peace itself as an unqualified virtue, as he spoke when he finally came to Sweden:

We must ever bear in mind that the great end in view is righteousness, justice as between man and man, nation and nation, the chance to lead our lives on a somewhat higher level, with a broader spirit of brotherly goodwill one for another. Peace is generally good in itself, but it is never the highest good unless it comes as the handmaid of righteousness; and it becomes a very evil thing if it serves merely as a mask for cowardice and sloth, or as an instrument to further the ends of despotism or anarchy. We despise and abhor the bully, the brawler, the oppressor, whether in private or public life, but we despise no less the coward and the voluptuary. No man is worth calling a man who will not fight rather than submit to infamy or see those that are dear to him suffer wrong. No nation deserves to exist if it permits itself to lose the stern and virile virtues; and this without regard to whether the loss is due to the growth of a heartless and all-absorbing commercialism, to prolonged indulgence in luxury and soft, effortless ease, or to the deification of a warped and twisted sentimentality.

Hmmm… “…deification of a warped and twisted sentimentality” — perhaps like a cult built around drowning polar bears that are not really drowning.