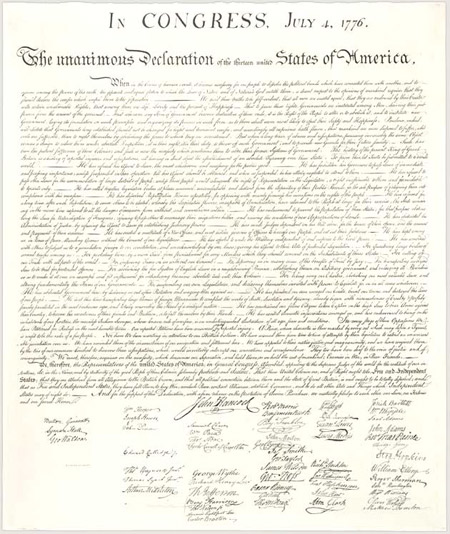 We hold these truths to be self-evident, that all men are created equal, that they are endowed by their Creator with certain unalienable Rights, that among these are Life, Liberty and the pursuit of Happiness.That to secure these rights, Governments are instituted among Men, deriving their just powers from the consent of the governed…

These words from the Declaration of Independence have stirred the souls of countless people through the years.

Yet declaring independence, as moving and dramatic as that moment was, was less of a challenge than determining how to maintain that independence.

It was not after drafting the Declaration of Independence but after the Constitutional Convention of 1787, which drafted the Constitution, that Benjamin Franklin was asked:

“Well, Doctor, what have we got — A Republic or a Monarchy?”

It is hard to know which to be more impressed with, that there existed in America sufficient people of exceptional intelligence and learning to draw on in the drafting of America’s founding documents or that the political culture, so deferred to excellence that these men were elevated to positions where they could do so much good.

Although the preamble is stirring, most of the Declaration of Independence is a long list of grievances against the King.

Of course Americans knew their grievances and so did the British King. This list had to be published because the Declaration explains that when a country is going to do something so drastic as to declare independence “… a decent respect to the opinions of mankind requires that they should declare the causes which impel them to the separation.”

To celebrate America’s Independence Day — July 4th — we too wanted to show a decent respect to the opinion of mankind. So we’ve turned our pages over to an important interview with the representative of a British association. We’ve published letters from employees of companies that operate primarily on opposite sides of the world. And we’ve ran a couple of announcements of new jobs to celebrate new beginnings such as the declaration involved.

If you want to do your children, or yourself, a favor, buy a copy of Miracle At Philadelphia: The Story of the Constitutional Convention: May to September 1787by Catherine Drinker Bowen.

No one else has ever so perfectly captured the majesty of what went on in that sweltering Philadelphia summer of 1787 when they nailed the windows shut for fear someone might hear their deliberations.

The book reads like a novel, but is most certainly a factual reference book. If you have been watching Europe strain to develop a constitution or you just want to know more about America and the unique place it is on this earth, buy the book here

A happy Independence Day to my fellow Americans and to all who love freedom.