The interconnection between produce and foodservice is always a challenge. Most operators do not have dedicated produce buyers and so it falls to general food and beverage buyers to decide whether to get involved in the produce industry.

We have written about many foodservice operators who are involved in the produce industry, including this piece, Pundit’s Pulse Of The Industry: Del Taco’s Janet Erickson And Notre Dame’s Dan Crimmins, in which we got food safety input from Janet, who rose to become Chairman of PMA, and Dan, who serves on PMA’s board. Yet if you asked the Pundit to name the person at Del Taco and Notre Dame who will be the next PMA board members, we would have no idea. For all we know they might drop their membership.

Today, with food safety being such a pressing issue, this disconnect is even more of a problem. As we wrote in our piece that explained NRA’s decision to endorse the California Marketing Agreement’s GAP metrics:

What it actually points out is something we have known for a long time. Most foodservice companies don’t know they are in the produce business and aren’t engaged in the industry as they should be.

Fortunately, the large foodservice distributors often can serve as a bridge. They know foodservice — that is their customer base — but they also have dedicated produce people who understand the produce business. They can be invaluable if we ever have differences with NRA or other foodservice associations.

Now we have a true produce person — one who cut his eye teeth in his family’s produce company, ascending to the title Vice President, Produce for Sysco: 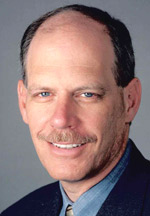 Mr. Dachman, 51, began his produce career at his family-owned business, Perry’s Produce Co. After the sale of Perry’s Produce in 1979, he and his father opened a produce operation for Kraft Foods, Inc. in Denver. In 1987 Mr. Dachman joined Kraft’s corporate office as national director of produce. In 1992 he began working for FreshPoint of Houston, Inc. as president of Southern Produce, and two years later he was named president of Produce America, FreshPoint’s central procurement office in Salinas, CA. In 1998 he transferred to FreshPoint’s Denver operations as general manager and the following year he was appointed to president of FreshPoint’s Atlanta Group. In 2000, after SYSCO acquired FreshPoint, Mr. Dachman was promoted to his current position.

A native of Denver, Mr. Dachman attended Colorado State University, located in Fort Collins, CO. He and his wife, Clari, have four sons and reside in Sugar Land, TX.

Rich is on PMA’s Fresh Summit Committee and the convention is in Sysco’s Houston hometown this year, so combined with his new responsibilities he is going to have a busy 2007.

Best of luck to Rich in his new position.