For this Pundit, 2018 was a year of extraordinary loss. The Pundit Momma passed away and, although the Pundit Poppa had passed years earlier, they were so close — dating since high school — that in some strange way, it didn’t feel like he was gone until both were gone.

It is clear that in a real way, life will never be the same. I find myself constantly telling stories to my children, regaling tales I was told or speaking of things I saw my parents do and say, explaining what they believed or the wishes they had quietly whispered. I tell each story and look at their eyes, watch every response, wondering if I can somehow keep my parents alive even after they are gone.

That is the idea, right? We live on through our children and how desperately I hope I will be equal to the task — transmitting values, memories, love itself.

There is, however, the present to be attended to. When I say life has changed, it is on two sides. First, an important component of emotional support is gone. Shortly after my mother died, I had an article published in The Wall Street Journal. For someone like me, it was a career capstone, combining journalism, produce and public policy. Indeed, I received more than 10,000 likes, comments, emails, letters, etc., in various formats.

Yet, what was missing was painful. Many years ago, I had another piece published in The Wall Street Journal, and my father emailed it to everyone he knew, including a comment, which was untrue, about how much smarter this son was than his Dad. When I walked into his office, he had the article made into a plaque which still hangs on his office wall, untouched even eleven years later.

And you realize what is lost…

I am lucky. I have a wife, children, close friends and extended family. I’ve flown off to give speeches on every continent, often interviewed on TV, radio and in print. Still, if you are lucky enough to come from a loving family, you realize that no one will ever cheer for you quite like your parents did. And the cheers from others will never be quite as important to you.

The dynamics of my family relationships are now juggled. While the wind beneath my wings is gone, I am suddenly responsible now. There is nobody senior. So, I walk up a step.

Yet even in this year of loss, there is much good that has transpired. Junior Pundit Primo, aka William, got a license and a car. Junior Pundit Segundo, aka Matthew, got his Learner’s Permit. We went to visit colleges and, with family and friends assembled to mourn, we got to see many who we don’t often get to see.

On a professional level, it was a year of triumph. Our Amsterdam Produce Summit was the most important and elevating event in the world of produce in 2018, guiding the industry into the world of omni-channel retailing. It was our 9th annual New York Produce Show and Conference, working with the Eastern Produce Council, and it was a record on all counts and as well received as anything we have ever done.

Our London event, working with the Fresh Produce Consortium (FPC), has become a nexus for the produce industry to assess the whole question of Brexit.

We launched a wildly successful Global Cherry Summit and, with the FPC, a new HR event in England.

For the 33rd consecutive year, PRODUCE BUSINESS had a record year.

The events of the past year drew me even closer to my brother, Barry, and made me realize how lucky I am to work with Ken Whitacre, who I met as an 18-year-old freshman at Cornell University.

So many good friends came to every memorial, traveled great distances, wrote beautiful letters. So many gave generously in her name. Between my mother’s and father’s passing, the produce industry donated more than a small fortune to important causes and institutions. Most of the donors didn’t know either of my parents. But they know me, some personally, many just through my writings.

But I have shared a life, a wedding, the birth of William, of Matthew. The passing of my father and, now, my mother. And in so doing, I have been fortunate to have become friends with people in, quite literally, almost every country in the world.

And the messages came rolling in from Fiji, Tibet, Africa and beyond. Thanking me for being open. Almost inevitably, the notes have the same words: “I also” — and then a connection “had a wedding” …“had a child” … “battled with cancer” … “helped an ill parent” … “ lost a father” … “lost a mother”.

The connections I built were unintentional and mainly through the incremental accumulation of a lifetime of steady work. But, in the midst of all the sadness, all the tears, how can one not feel blessed to be enveloped with so much love and friendship? 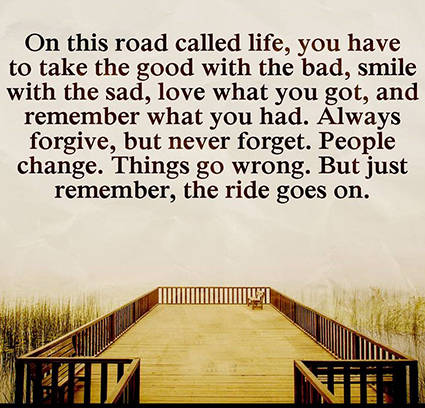 So that is what we will tell the children. Mom is still guiding our ways.

And as we all move into a New Year, it is that holiday classic movie, White Christmas — where the Christmas songs are written by a famous Jewish songwriter, Irving Berlin — that offers us the best guideline for how to be happy in life. Whether things are going great or hitting bottom, all of us have a choice to make about how we perceive things.

I hope my children, and all of us, will choose to live in the light. So, wishing everyone a Happy New Year filled with health, happiness and prosperity, here is a little tip to make sure that every year is a good one: