Over in Minneapolis/St. Paul, the Star Tribunemaintains one of the most thoughtful editorial pages and commentary sections in the country, and thanks to the Internet and RSS feeds, its selections have come to be read widely across the country and around the world.

So we were tickled pink when, in the course of an editorial on food safety drawing on a new study of consumer attitudes toward the safety of the food supply, the editors elected to quote us because we discussed the relationship between this decline of public confidence and the inability of the industry to quickly trace-forward all the affected products:

“This showed a tremendous problem with the industry’s trace-forward capabilities. Once we knew it was that plant and that company, it was still hard to identify all the users of that product.”

Jim Prevor, also known as the Perishable Pundit, is a well-respected authority on food safety and writes one of the best-known blogs on the topic: www.perishablepundit.com.

Of course, as pleased as we were to be mentioned, we were also intrigued by this new study, particularly the fact that it is a continuous study of consumer attitudes, whereas most studies are only episodic. We asked Pundit Investigator and Special Projects Editor Mira Slott to find out more:

CFST has been designed as an ongoing survey, conducted every week. The benefit comes by measuring the index over time as opposed to occasional snapshots. Consumer confidence rises and falls, but falls noticeably after large media exposures to stories about foodborne illnesses. With this continuous tracking, we hope to find out how rapidly confidence recovers. We want to see if the accumulation of outbreaks produces long-term erosion in confidence.

Q: How long have you been tracking consumer confidence in food safety? Have you formed a good base line to accurately assess trends?

A: Since we started weekly tracking in May of 2008, we’ve been seeing confidence very low, even in the best of times. We’re now at a new low level. This confidence does tend to rebound after some time, but it plunged with the peanut butter outbreak, and it’s too early to understand the long-term ramifications. It not only hurts the peanut butter industry but the whole food industry. The company implicated handled only 2.5 percent of peanuts in the country, but everyone is painted with the same brush.

There could be many reasons. The outbreak has gone on for so long with massive media coverage, eight people died and hundreds were sickened, and peanut butter affects kids. It comes on the heels of the Salmonella Saintpaul crisis, which also dragged on and resulted in a steep drop in consumer confidence.

Q: Do you have a copy of the full report we could share with our readers? Have you produced a chart that graphs the highs and lows in consumer confidence correlating to different food outbreaks and food safety issues?

A: This is fairly new and we haven’t written up a report yet. We’ll have a paper out by the first of May, but plan to release the first true index by the end of March. We do have a chart that follows changes in consumer confidence from May of 2008 through February 2009 based on our survey findings. 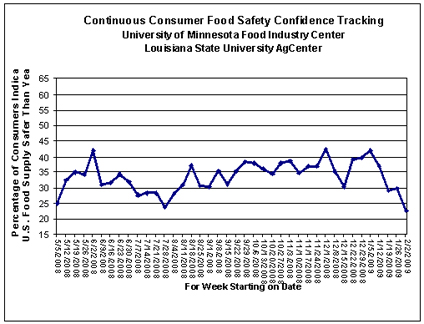 Q: Could you send along the questions asked in the survey?

A: We want to wait until we’ve finalized our consumer confidence index, which will be a composite of probably six questions that will talk about how much confidence consumers have in the safety and security of our food supply.

What came out of this was a trend line. Consumers were asked, do you think food is safer than a year ago. After media events which correspond to food safety incidents, this trend line plunges down, and in the peanut butter recall, consumer confidence went down to the lowest we’ve seen it since we started the study in May 2008.

Once we have the index finalized, we plan to put out a report every month to show how it’s changing. This is unique. As far as I know, nobody has done a continuous tracking. The whole point is to try and understand better how food outbreaks and media coverage impacts consumer confidence in the safety and security of our food system.

Kudos to the researchers at The Food Industry Center at the University of Minnesota and the Louisiana State University AgCenter as well as the National Center for Food Protection and Defense for funding this tracking study.

Many years ago, Pundit sister publication PRODUCE BUSINESS launched a continuous tracking study of consumer attitudes toward the produce industry. We tried valiantly but after a few years had to mothball the project because doing it properly cost several hundred thousand dollars a year and we couldn’t get sufficient support.

This new tracking study, though not produce-specific, is exactly correct in format. To study the effect of events on consumer concerns, one has to be in the field as the news happens and this tracking study does this.

It is not surprising that it comes to us out of Minnesota. There is something unique about that state. Its state laboratories and health department are involved in identifying the source of a wildly disproportionate share of those food safety outbreaks that are identified. Indeed all the focus on possibly establishing a single food safety agency at the Federal level really ignores that the disjunction is often on the state level. Few steps could better advance our food safety infrastructure than bringing all the state labs and health authorities up to the level at which Minnesota routinely operates. Of course, it will be difficult to clone an indispensible national resource such as Mike Osterholm.

One of the intriguing questions not addressed by the study, but which, perhaps, the food industry could cooperate with the researchers to ascertain, is what the effect of rises and falls of consumer confidence is upon actual purchasing.

Data is sketchy but there are some intriguing indications that with even halfway decent trackback and trace-forward, the effect on purchases can be minimized, although dynamics in the food industry seem to imply it is often not minimized to the extent it could be.

AC Nielsen just came out with its numbers for peanut butter sales. Now retail peanut butter was not affected by this Salmonella episode — the Peanut Corporation of America, believed to be the source of the problem, sold peanut paste for industrial purposes, used in cookies, crackers, etc. So Skippy and Jiff consumers have nothing to worry about — at least in terms of this outbreak. Even so retail sales of peanut butter have suffered:

Now a 13.3% decline in purchases is not insignificant. In fact, because of the dynamics of supply and demand, one would expect a 13.3% decline in demand to cause a price collapse and basically destroy the season for peanut farmers.

Still 13.3% is not as steep a drop as one might expect in an outbreak such as this in which eight people have died and which has been in the news for weeks with constant recalls.

And in fact there are indications in the data that the drop speaks less to consumer concern than to retail hesitation to raise the issue of food safety. Nielsen also reported this:

The total retail value of jarred peanut butter sales in the period fell 2.3 percent to $87.2 million, from nearly $89.3 million in the same period last year.

Note the discrepancy: Sales in pounds are down 13.3% though sales in dollars are down only 2.3%. What would account for this discrepancy? Easy, the instant the crisis broke, retailers pulled back on promotions, pulled the product from ads and just charged regular retail price. Of course, when they did this they also shrunk display sizes, didn’t do weekend end caps, etc.

Now, it is also possible that the big manufacturers of Skippy and Jiff also pulled back, thinking their promotional funds are better saved for a time when consumers wouldn’t be getting mixed messages. We don’t know.

The whole situation, though, is reminiscent of what happened after 60 Minutes ran its famous report on Alar and apples. Apple sales collapsed but careful study of the data indicated that the sales decline was best explained by the decision of retailers to pull back on advertising, promotion and shelf-space, not, at least directly, by consumer attitudes.

Now it is, of course, possible that retailers know their customers and correctly predict what they would buy and preemptively adjust marketing and merchandising to conform to this demand. Though possible, this is unproven. It is at least as logical to say that retailers — more concerned with having happy consumers not thinking about foodborne illness as they walk the aisles — work to minimize any association with unpleasant thoughts by avoiding sales, minimizing displays and charging full mark-up.

Many thanks to Jean Kinsey for helping us think through such an interesting topic.