Changing Times And The Passing Of A Gentleman: Joe Turino

As the industry prepares to convene in Orlando for the annual convention and exposition of the Produce Marketing Association, one of the business management questions this brings to mind is precisely how did PMA come to have the largest produce event in the country.

It wasn’t always so. When the Pundit was a boy and the Pundit Poppa and Momma were flying off to the produce convention every year, it was to United they went, not PMA.

Part of the story has been well recounted. PMA made a strategic decision to focus on the buying end of the industry in part with the hope and expectation that the sell-side would follow. It turned out to be a shrewd strategy.

Add in some management miscues at United, a little arrogance that came with being so large and successful — United turned down a plea to absorb an almost-broke PMA in the early years — and the fact that PMA did not do government relations back then and thus avoided expenditures and the in-fighting that comes from taking positions, and the story is pretty clear.

There were, however, other factors that influenced the outcome, not as often recounted in the telling of the tale. One factor was a societal change that impacted where people lived and vacationed, another was a labor force change and still another was the change in the seasonality of the industry.

PMA was generally in October and United was in February. When United set that February date, back in some time immemorial, the produce industry was pretty much dead. The spring planting hadn’t begun; the summer and fall harvests were over. Retail and wholesale offerings shrunk to acknowledge the paucity of crop available. All in all it was a good time to go on vacation. And what better vacation to go on than one you could write off on your taxes. So everyone headed to United, often held in some warm climate — can you say Hawaii! — during that wintry February down time.

Lots of big trends were happening that influenced the outcome. Central air conditioning became commonplace and people began moving to the Sun Belt. This made the appeal of a winter escape less powerful. Women streamed into the work force so they often weren’t free to come to the convention with their husbands. That made it less of a vacation and more of a business function.

The importance of the rise of counter-seasonal produce and, specifically, the Chilean deal comes with news of the death of one of the pioneers in the field, Joe Turino. The Pundit had the privilege of working closely with Joe as we worked together at the Pundit’s family produce business. Another alumni of the family firm, Mike Pfluegar, who was a USDA inspector and then joined Prevor Marketing International, where he worked closely with Joe before forming High Point Marketing of NJ, Paramus, New Jersey, sent along the news:

It is with great sadness that I inform you of Joe Turino’s passing.

As you know we worked together at your Dad’s place in New York and for some years after Prevor sold to Polly Peck. Joe was 90 and his wife Betty passed about two years earlier.

Joe retired from the business officially in about 2003 when he closed the J.M. Turino Company in Waldwick, NJ. He moved to RI where he enjoyed Golf and Boating with his family.

He was connected in the business for many years. First working with his father Michael Turino in the old Washington Market on the lower West Side of New York.

Joe went to Colgate in upstate Hamilton, NY. After college he enlisted in the US Navy where he served during World War II as an officer on various ships. The one ship that he served longest was a troop carrier taking the wounded from the Far East Theater (Burma area) over the West Coast of India where the British were in control and to hospital.

When he was discharged from the US Navy in early 1946, he rejoined his father and became a principal in the Wm. Turino Co. and worked there in the Washington Street Market until the Hunts Point Market was built. He along with many others migrated to Hunts Point.

The J.M. Turino Company was located on Row C in the market and in the early 1980s he sold it to the Guardian Group Investment Company.

He joined the Jac Vandenberg Company and later Prevor Marketing International, also headquartered in the market. While at Prevor he was the Import Director in charge of the Import Department importing primarily Chilean Fruit, Greek Figs, Italian Chestnuts and NZ Kiwi.

Joe was one of the pioneers in the early 1970’s in the Chilean fruit importing industry, along with Ed Guzi of Coexport in Chicago, William Kopke Company and the Jac Vandenberg Company, to mention a few.

I remember Joe telling me one time that his father imported the First Onions — Valencia variety — from Chile in 1934. 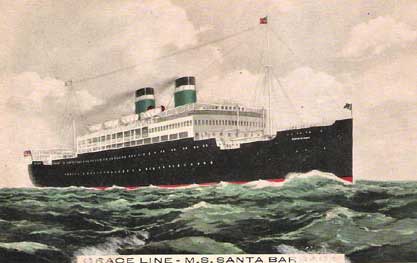 The Grace Line in New York was the carrier. He told me the owner of the line (Peter Grace) called his father and said they had a passenger boat in Chile coming to New York and it needed ballast (weight in the bottom of the boat) to make the trip.

1934 was the height of the Depression, and Turino did not know if he could sell the onions once they arrived into New York (Washington Street Market). He told this to Peter Grace, owner of the Grace Line, and his reply was we need the ballast…if you sell them then pay us something for the freight. So they filled the boat hold with the onions.

Several weeks later the boat arrived with its passengers and the onions. Joe went down to the pier to meet the boat. Also to see and inspect the onions.

He told me that the passengers came off the boat first and to his surprise one of the first to come down the gangway was Carry Grant and Mae West. Both were actors in Hollywood at the time and were on vacation in Chile.

When the onions were unloaded they were sold quickly to various handlers in New York. The Great Atlantic and Pacific Tea Company, Grand Union, Fierman Brothers to mention a few.

It was to great surprise that Joe’s father called Peter Grace to give him the good news. Not only did he sell all the onions, but was able to pay the ocean freight to the Grace Line.

Joe will be truly missed by his family and friends who knew him from the produce industry.

Our recollection of Joe was that he was a man of dignity. In an industry with a lot of ruffians, he had a kind of elegance to his bearing.

The produce industry has lost that rarest of things, a gentleman.

May Joe and Betty both rest in piece. Our condolences to his children, Susanne, Thomas, Michael and Stephen, daughters-in-law Barbi and Amy, siblings Rita Moore and Dr. Gerard Turino and 7 grandchildren.

Donations in his memory may be made to the South County Conservancy.