United Fresh has been hard at work on Capitol Hill:

Congressmen Host “Spinach Is Back” Salad Bar on Capitol Hill

Washington, DC — Yesterday Rep. Sam Farr (D-CA) and Rep. Wayne Gilchrest (R-MD) hosted a “Spinach Is Back” Congressional luncheon with a number of Administration and public health officials to raise awareness that fresh, safe spinach has returned to store shelves, and is an important part of a healthy diet. 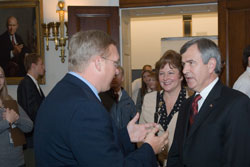 According to his staff, Rep. Farr thought of the idea of a “Spinach Is Back” salad bar during one of his many recent trips to the Salinas Valley to meet with growers and processors in his district. “Despite the fact that authorities agree it is safe to eat fresh spinach, there has been less fanfare associated with spinach’s return to grocers’ shelves than there was about its voluntary recall in September. We intend to change that,” Farr said. 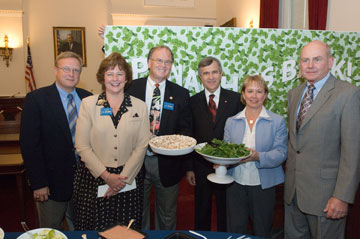 In remarks at the lunch, Secretary Johanns and FDA’s Dr. Brackett spoke to reporters and guests reaffirming that the E. coli scare was over and emphasizing the healthfulness of spinach. They enjoyed making their own gourmet spinach salads as a way to let consumers know there is no longer concern about consuming the popular leafy vegetable. 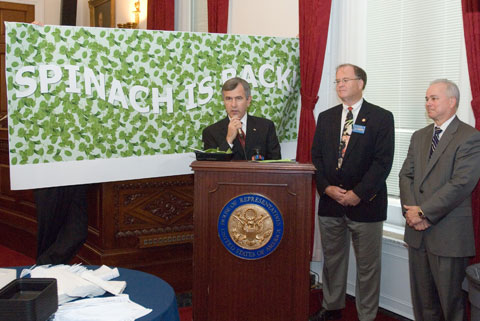 Secretary Johanns, Rep. Farr, and Dr. Brackett tell consumers
it’s time to enjoy safe and healthy fresh spinach in front
of the sign, “Spinach Is Back.”

“We salute Congressman Farr for hosting this event, which is a real service to the public in getting out the word that spinach is safe and we should all be comfortable enjoying this healthy product,” said United Fresh Produce Association Senior Vice President for Public Policy Robert Guenther. “Since the broad removal of all spinach from the marketplace in September, many consumers do not realize that FDA’s investigation has confirmed that only one lot of spinach, produced on only one day in one processing plant, was actually contaminated. We’re proud that our industry fully cooperated with FDA in being cautious, as hundreds of growers, processors and retailers pulled the entire spinach supply from the market within 24 hours. But it’s reassuring to learn that only one lot of spinach from one day’s production from one processing plant was hazardous,” he said.

“Yet since even a narrow incident such as this can have devastating health impact, our industry is also redoubling our efforts to ensure that every single grower and processor is following strict best agricultural practices and strict manufacturing and handling practices,” said Dr. Jim Gorny, United Fresh senior vice president for food safety and technology. “We are also working together with growers, processors, distributors, retailers and foodservice companies to ensure that we examine every step in the total supply chain to further reduce and minimize what is already very low risk. We cannot ever forget the human impact of an outbreak such as this, and all of us involved in delivering fresh, ready-to-eat foods to consumers must embrace the importance of our own personal actions in reducing the risk of this happening again,” Dr. Gorny said.

United Fresh Produce Association, the American Mushroom Institute, and the United Egg Producers helped coordinate the spinach salad bar in conjunction with Rep. Farr. Special thanks to Taylor Farms of Salinas, CA, which donated the spinach and Belair Produce of Hanover, MD which coordinated staging and product delivery to the House Longworth Building where the luncheon was held. 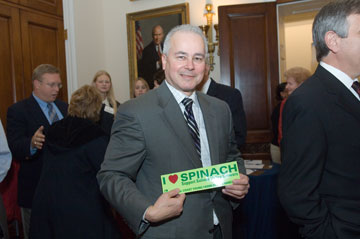 A particular achievement was getting the United States Secretary of Agriculture, Mike Johanns, and the FDA’s Robert Brackett to attend the event. Hopefully they will pick up a lot of news coverage around the country. As our Pundit Pulses have shown, there is still quite an educational and public relations job to be done to convince consumers spinach is safe.

The “Spinach Fest” got at least some local publicity in Representative Farr’s district, which was good for him as earlier in the crisis the Representative tried to hold a spinach-eating news conference and had to cancel it as he couldn’t find a retailer selling spinach to eat.