Some of the things we like most about this industry are the sense of family and history and the big heart of the people who toil in the trade. All these attributes were on display at an event this past weekend. A hat tip to Cindy Jewell of California Giant Berry Farms for sending this along:

The Original Spring Lamb Barbecue celebrated its 50th anniversary on May 16, 2009, at the Crosetti Ranch in the foothills of Watsonville. This was a special event for many reasons and for many attendees, but most important for all was the $72,000 raised in support of the American Cancer Society. This year’s contribution surpasses well over one million dollars in total contribution made to the American Cancer Society from the event.

This long standing stag event was attended by over 800 men on a perfect sunny day as they all enjoyed lamb barbecued on four different pits, and a horseshoe tournament that included over 60 teams on the expansive property nestled among apple orchards and oak trees.

Over the years, hundreds of volunteers from the Pajaro Valley have been committed to participating in the Spring Lamb event which contributed to its long running success. This year was special for many, including Abel Zinella the last of original organizers who attended the very first Spring Lamb Barbecue. This year Abel enjoyed witnessing a complete renovation of this historical ranch, which provided for greater capacity and enjoyment for all who attended. Renovations of the Crosetti Family Ranch began two months ago by one of the long time attendees (and volunteers), Jerry Shott. His construction crew spent long hours getting the venue ready for its 50th celebration. 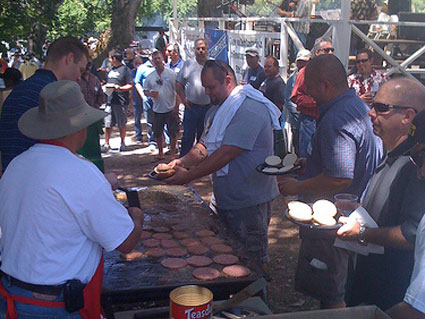 Also new this year was the development of a website to capture information on the history of the event, acknowledge long time supporters that have passed, and to allow sponsors a way to contribute to the Spring Lamb event on-line. The website www.springlamb.org was donated by California Giant’s web host M29, and their ad agency McDill and Associates.

“Support we receive for this annual event is so strong throughout our community here in the Pajaro Valley”, says Chairman Bill Moncovich. “We are so appreciative of everyone who helps to make the event a success each year. In addition to those who cook, attend, and clean up, we have over 100 individuals and companies that sponsored the barbecue this year”, adds Moncovich.

Last fall the Cancer Society acknowledged the longevity of the event and the cumulative contribution of nearly $1 million; praising Bill Moncovich and the organizing committee for hosting the oldest, consecutively held, fundraiser for the American Cancer Society in the United States. This accomplishment was also recently recognized by Congressman Sam Farr, with presentation of certificates to key supporters and organizers of the now 50-year-old event.

Proceeds from the Spring Lamb are also contributed to a local organization that supports families of children with cancer. Founded in 1998, Jacob’s Heart Children’s Cancer Support Services provides support to address the emotional, social, and financial needs of children with cancer and their families. The organization aims to normalize as much as possible the children’s experience by providing for families’ basic needs. All services are offered free of charge in both English and Spanish.

For more information on how to sponsor the Spring Lamb Barbecue held each year on the second Saturday in May and its fund raising effort to fight cancer, contact California Giant Berry Farms at (831) 728 -1773 or visit www.springlamb.org.

The history of the event is pretty amazing, with Bill Moncovich’s father, John Moncovich Sr., being among the founders of the event a half century ago. Fortuitously John Moncovich Sr. was chairman of the local chapter of the American Cancer Society, so that is where the money raised was sent and, last year, with the five decades’ mark ready to be met, the American Cancer Society acknowledged the longevity of this event in a letter:

Our records indicate that this is the oldest, consecutively held, fundraiser for the American Cancer Society in the country.

We were honored when your father, John Sr. and his friends — J.J. Crosetti, Louie Lettunich, Peter Scurich, Pat Carroll and Chick Arbanas — decided to donate the proceeds of the event to the American Cancer Society. We were thankful when you decided to continue to hold the barbecue as a tribute to your dad.

The longevity of the event is amazing enough, but coupled with the generosity of your family hosting the barbecue for all of its 50 years, that is truly special. Several years ago, you predicted the event was on track to raise $1 million by its golden anniversary. That goal is within reach; to date, the barbecue has raised more than $950,000.

Your donations support lifesaving discoveries, spread knowledge and awareness, increase the odds of surviving cancer and improve a cancer patient’s quality of life. The money raised is central to supporting our mission, which aims to fight cancer through research, education, advocacy, and service.

Congratulations to all involved. We think it is a pretty terrific thing that the produce industry should be involved in the oldest, consecutively held fundraiser for the American Cancer Society.

Many thanks to Cindy Jewell and California Giant for sharing this gem.